I'm working on a project to soup up the Z400, and have some results.  Mine came with a W3565 quad core processor, and I read in our forum here that this "version 2 " motherboard with the later boot block date (11/10/09, from BIOS) and the 6 memory slots can support running a X5690 processor despite the fact that processor was never listed in any of the HP QuickSpecs for this workstation.  That processor is equipped for running in a one or two-processor workstation (it has 2 QPI links rather than just 1).  It also has been reported to be the fastest processor that will run in a Z600, but this has never been posted/proven by a reliable known source.  It also was never listed in the HP QuickSpecs for the Z600 "version 2" later generation motherboards).  It was listed by HP for use in the "version 2" Z800.

I can confirm that the X5690 runs just fine in my "version 2" Z400, and have some advice on a less expensive eBay used processor that should give virtually the same performance.

Some Z400 generalizations:  Most of them came with the higher capacity "Performance" 463981-001 heatsink/fans that can handle the 130W max TDP processors.   These are larger, have 92x92x25 mm fans, and have 3 instead of 2 heat tubes built in.  Because the Z400 is a single processor workstation it is optimal to use the fastest hexacore (6 cores) processor) that can work.  You want the fastest available processor clock speed that will run in that workstation (3.46 GHz), and you want the highest transport speed (6.4 GT/s QPI).  You want the largest cache (12MB SmartCache).  You want the FSB of the processor to be the highest possible so that if you use fast 1333 MHz memory it will be allowed to run at its fastest speed and not held back by a slower FSB processor (The ZX00 series hardware is maxed out at 1333 FSB).  You also would prefer a Xeon with only one sSpec code so you don't have to figure out what version is the latest.... there will be only 1 version if there is only 1 production sSpec code.  Never buy one that has a sSpec code that starts with a Q..... it will be a "Qualification" pre-release processor.  Prefer to buy from a US rather than China source unless there is a great deal from a proven good source, and you don't mind waiting 2-3 weeks.

Update to the latest BIOS, which is currently 3.60 and came out 4/16.  It is best to use matched memory..... for us that is six sticks of either 2GB/stick or 4GB/stick with each stick having a speed of 1333 to match the fast FSB value of the processor... that gets you fastest memory performance with matched channels.  The Z400 version 2 is only certified for ECC unbuffered memory whereas the Z600 version 2 can run proper ECC buffered or unbuffered memory.

The W7 performance scores below are from the same Z400 before and after the processor upgrade this morning, and the video card scores shown will rise when I put in a faster GTX or Quadro card.  I tend to stick with the Intel 320 series SSDs off eBay because they are SATA generation II SSDs and have been rock solid for me.  I like the 300GB version best, which often will give me a 7.8 drive score.  The maximum score for any subcategory shown is 7.9.

Here's a W7Pro64 Windows Experience Index probe for my original processor.  Note that the processor and memory performance into here is the thing to focus on.  This is the fastest latest quad core released for the Z400.  The switch to a faster video card will raise the overall score, which is based on the slowest component in the speed test: 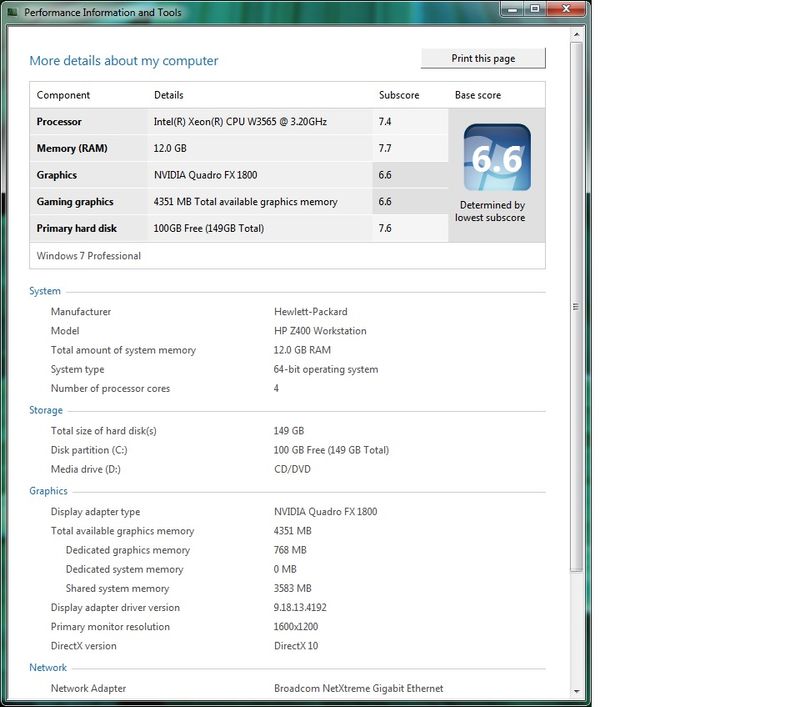 Here's the same for the X5690, and the W3690 will produce the same scores.  This shows the benefit of the faster processor and the higher number of cores used (6 versus 4).  Again, dropping in a fast GTX video card will raise the 2D and 3D video scores up to about 7.8: 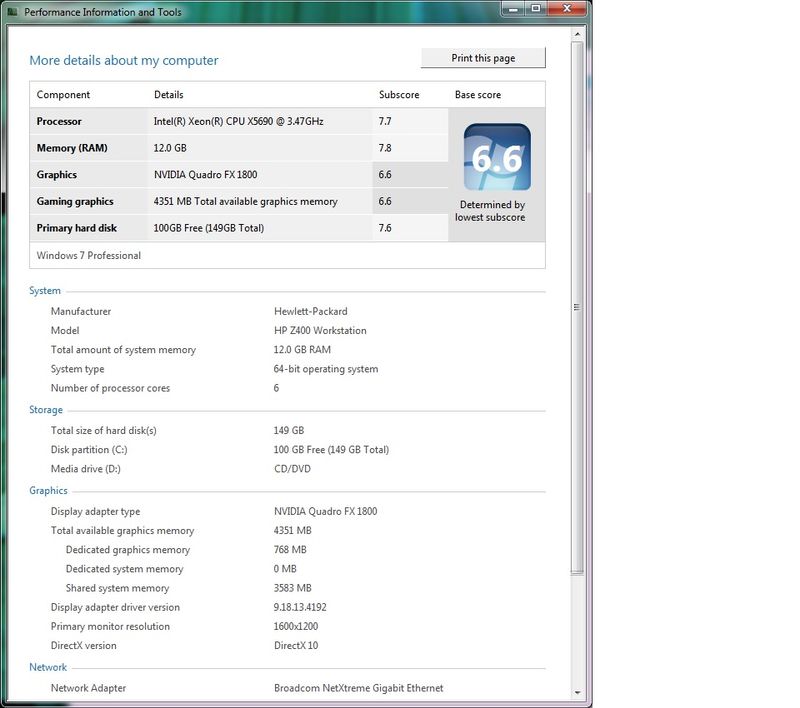 I have the same question
1 ACCEPTED SOLUTION

So, let's assume your really have a Z400 and you really got a good W3690.  In that case your BIOS is whacked.  How to really clear that?

Unplug everything.  Everything.  No power from wall, no keyboard, no mouse, no video cable.  Nothing attached.

Get a beer.  Put back in battery.  Push CMOS button and hold 30 seconds.  Plug all stuff back in.  Cold boot into BIOS and go to the option to oad defaults.  Back out of BIOS properly and don't forget to choose F10 to save changes on the way out.  Boot up system and there should be only 1 processor showing now.  Enjoy that beer, regardless.

The idea here is that any power from any source (including from monitor cables) can keep CMOS corrupted BIOS from being fully cleared.  The press and hold is to dump the capacitors of any energy present still.  The delays are to let any on-board energy bleed off also.  I personally had a HP motherboard that had problems keeping time, and this technique was the only method that finally fixed the issue.  Still fixed, 2 years later.

SDH, you are very experienced with setting up and increasing system performance on HP Workstations, but I have some comments for others.

Please click "Accept as Solution" if you problem was solved. This helps other forum readers.
1 Kudo

Thank you, Dan.... I thought I had seen that in a HP communication somewhere, but am glad to hear that we can just use what makes sense.... "Version 1" and "Version 2" (with boot block dates being the key to knowing the differences,  generally).

Your input has always been highly valued.  No more "Revision 1" from me.

Sorry about the bold.  Couldn't figure how to normalize it.

Please bear with me.  My pics were rejected because of  personal information so here are corrected ones.  I also received the following from supplier after sending them the same information including the original images with the serial numbers shown(kinda dumb right?) 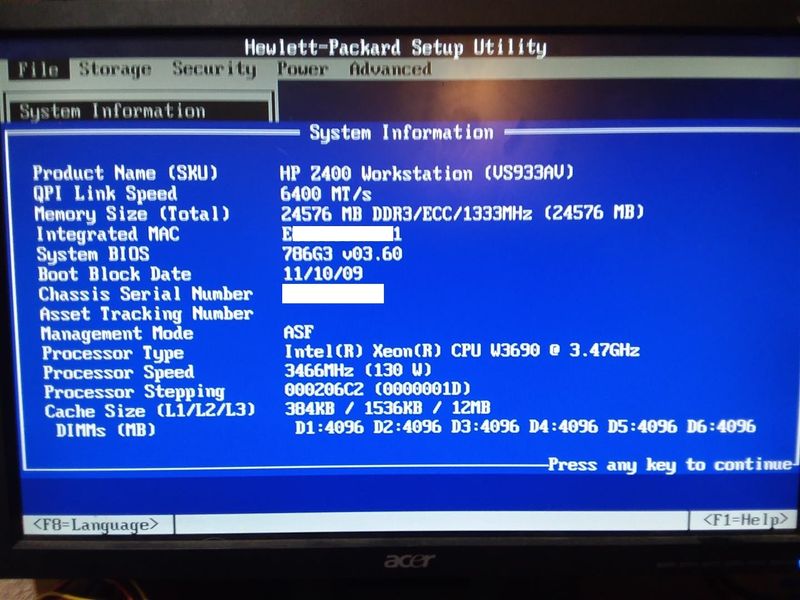 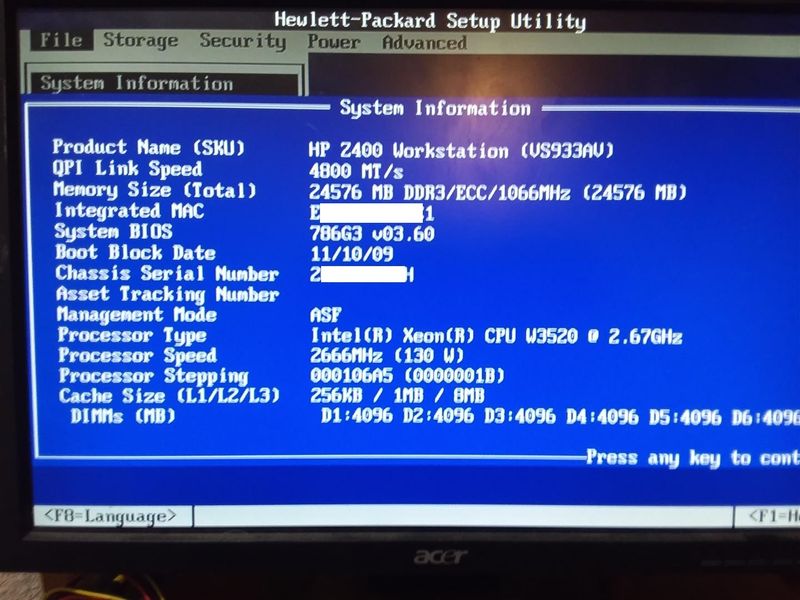 New message from: pc*one*world (7,000Green Star)
Hello dear Sir, thank you for contacting us, please know that we won't send bad item to our buyers on purpose, we did test our CPU carefully in windows7. It works well, then I send it to you.
Our CPU should not be problem. Dear Sir, please try the following motheds:
1.Please check your motherboard manual，make sure your motherboard can support this CPU.
2.Please check your other hardwares, such as RAM, video card or power supply, make sure your computer can work first.
3.Some motherboards need to be updated the BIOS to support new CPU, please update your motherboard BIOS to try again.

Best regards
P.S. All our items have warranty mark, please make sure the item was from us.

Have not been able to see the images yet.....

Thanks for the reply.  If I am not doing this in the proper way my apologies.  I have never used a support forum before, but this has me baffled.

I have 6 memory slots fully modulated with 4GB modules.  When the images are approved you will see the setup information page.

It stalls I believe at the point where execution should jump to the boot loader.  Now I realize these are DOS terms, however, modern windows operating systems must have a similar procedure. Both CPUs seem to complete the POST up until the screen is cleared and a flashing cursor appears in the upper left hand corner.  After a few seconds the W3520 displays the windows start screen.  The W3690 just stalls there.  The F9 boot option does nothing either.

Well, this is odd.

The Z400 is a single CPU workstation, so you physically can't run two CPUs in it.

I have heard of counterfeit processors where the stainless top of an expensive processor has been popped off and epoxied back down on top of a cheaper processor, but how would one get two processors detected if that was the case?

Are you sure you're using a Z400 and not a Z600?  If you really are using a Z600 the problem is solved..... you must use a two matched processors, not two different ones.  Could your BIOS be whacked and is showing Z400 when it really is a Z600?  Obviously you'll know if you have two sockets and two processors and two heatsink/fans.  If you do that is not a Z400 no matter what BIOS says.

So, let's assume your really have a Z400 and you really got a good W3690.  In that case your BIOS is whacked.  How to really clear that?

Unplug everything.  Everything.  No power from wall, no keyboard, no mouse, no video cable.  Nothing attached.

Get a beer.  Put back in battery.  Push CMOS button and hold 30 seconds.  Plug all stuff back in.  Cold boot into BIOS and go to the option to oad defaults.  Back out of BIOS properly and don't forget to choose F10 to save changes on the way out.  Boot up system and there should be only 1 processor showing now.  Enjoy that beer, regardless.

The idea here is that any power from any source (including from monitor cables) can keep CMOS corrupted BIOS from being fully cleared.  The press and hold is to dump the capacitors of any energy present still.  The delays are to let any on-board energy bleed off also.  I personally had a HP motherboard that had problems keeping time, and this technique was the only method that finally fixed the issue.  Still fixed, 2 years later.

I think the 2 previous pictures may have caused some confusion.  I have a z400, z440, zbook, and HP 15 Note Book. I actually like HP products and their support.  I have attached another pic of mu z400.  BTW I mistyped populated in my previous post.

The 2 previous images were of the same monitor at different times with different CPUs installed.  As you can see the BIOS recognizes both CPUs, but will only boot to the w3520 and not the w3690.

I will go through (rigorously) the procedure you described tonight and try to boot again tomorrow. 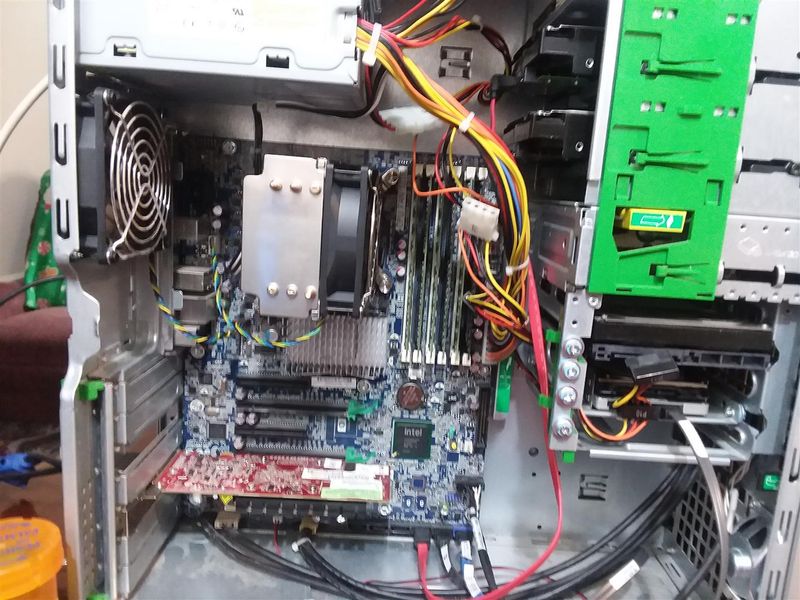