Thanks for your help on getting HP ZX20 overclocking going under W10.  Much appreciated.  Success to report.  I followed your directions carefully, and used the "latest stable" Throttlestop 9.2 plus your recommended XTU version 6.5.1.321, and the latest CPU-Z (1.92.0 x64).  In XTU my max stable processor core ratio was 42, saved.  In your Throttlestop directions, #6, one needs to click "Turn On" at bottom bar before Save can be triggered.  Turning off "Fast Startup" in W10 is key.... it caches some of the program settings during shutdown but then can reload them in incorrect order or not at the time the involved target program needs them.  Hence the random changes in the multiplier values you saw in XTU during startup.  We saw this same issue on cold boots but not on restarts with that software I mentioned previously.  This difference between a cold boot and a restart added to the mystery until I realized Fast Startup only acts during cold boots.

I'm using the latest BIOS no problem, 3.96, and using a stable multiplier of 42.  The spontaneous restart if 43 is chosen is just too instant to be a thermal issue, in my mind.  I'd be happy to send a Replicated Setup file of my BIOS settings if that would be of any interest.  I used the Bench tab in CPU-Z to get to its Stress CPU option, which runs all cores at 100%.  I can hear the Z440 fan gently rise and fall in RPMs as needed during this, but not in normal overclocked status at all.  Below is my current overclock, thanks to you, under W10Pro64 v2004, and a nice E5-1660 v2 as advised by Bambi and Brian.  Using Noctua NT-H1, by the way.  I like the way it spreads better than their NT-H2.  This is with the Z420 in the picture I included above in this thread with the bigger HP Z440 heatsink/fan I'm using in all of my Z420/Z620 builds now.  A 500 MHz overclock is pretty good for air cooling.... 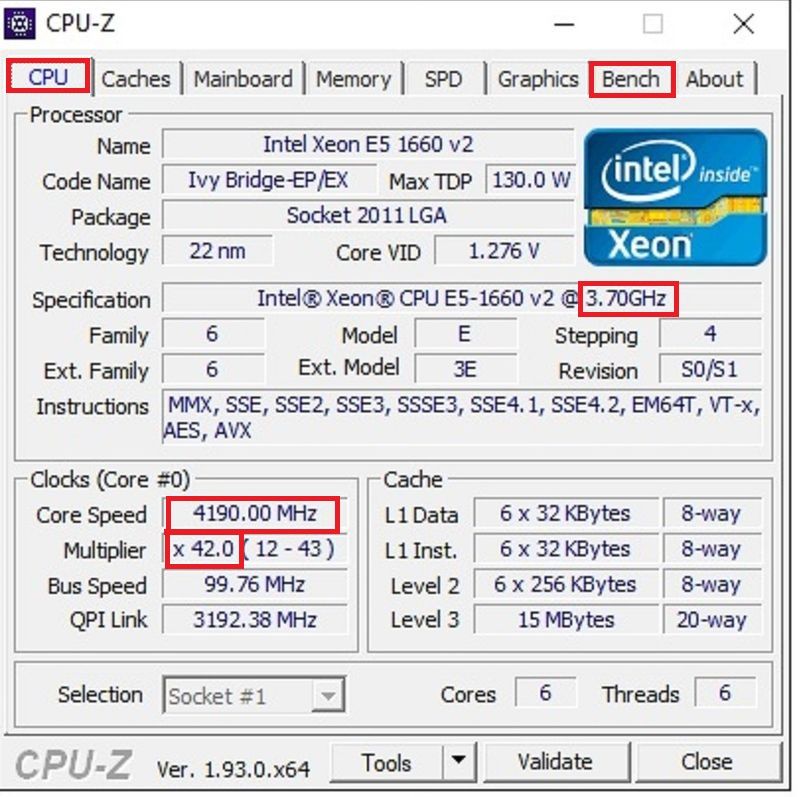 I'm glad to hear that you've found success in overclocking your system; if you would like to send over the replicated setup file I wouldn't mind trying it to see how my system responds with your settings. Still waiting on the Z440 heatsink to arrive in the mail, should have it by the end of the month.

Kamzeride,  I sent you a pm via the forum to get email to send the Z420's replicated setup file so you can clone my settings.  This is a little .txt file that the BIOS uses to load settings rather than have to set them all by hand.  Those always are named CPQSETUP.TXT so keep each in a clearly named folder so they don't get confused.  I tried to attach that below, but the response was "Valid file types are: jpg, gif, png, zip, pdf, doc, xls, docx, xlsx, ics, msg."

However, at least I can try to attach a PDF version, from which you could hand-edit a copy of yours to match mine.  The .txt approach is very fast and easy... and make sure you capture yours first so you can go back and forth.  Each asterix indicates the option chosen.  So far no success on the PDF.  Will try again...  Well, that did not work... So now I'll try both a zipped version of the original, and a doc version.

Sorry for the delay. Doesn't look like the attachments worked, I'll send you an email shortly to get the BIOS settings to check them against my own.

It appears that the version of XTU we are using works correctly for setting a scaling multiplier curve based on number of cores active, so ThrottleStop can be actually eliminated from the equation and is probably for the best to minimize conflicts. Should one want the processor to scale back down in clock speed for temperature/power savings, it's possible to set the Minimum processor state value to 5% (or higher) by editing the active power plan details:

To note, the primary differences between High Performance and Ultimate Performance are how quickly the Windows CPU Scheduler responds with core thread priority boosting and the latter plan disables core parking to reduce latency.

After having run the system for a while under various workloads, I've had some occasional & spontaneous reboots happen with a 42x all-core overclock -- I right clicked on the Start button last night and clicked on Device Manager and it rebooted without a bugcheck/BSOD. back to the drawing board and running through some additional stress tests and working out the kinks in the configuration. I believe this is likely caused by the higher voltages that XTU is pushing to the CPU automatically which it is having trouble sustaining after longer periods of uptime. This may also help confirm what you're seeing with spontaneous reboots at higher values -- if I try to push mine to 45x even on one core, the system immediately reboots when clicking Apply in XTU.

For my case with the Xeon E5-1650 v2, the CPU is basically the "big brother" of a Core i7-4930K which has a maximum voltage rating of 1.35V according to Intel's Ark site whereas the Xeon has a lower maximum rating of 1.3V. Using CPU-Z and Hardware Monitor, you can see the fluctuation in voltage across VIDs as you play with the multiplier settings.

On my system. up to 38x all core it doesn't exceed 1.286V, higher multipliers put it over 1.3V so I'm currently trying to find a balance to keep it around ~1.32-1.33V and will see how it goes. I also have a GeForce GTX 1070 Ti, 4x WD 500 GB's in RAID10 on the SCU controller, 3x SSDs and a Sound Blaster Audigy Fx installed so it's a power hungry machine. I do wish it were easier to determine if it's overdraw on the power supply or the processor not handling the voltage correctly, but that said pushing both the GPU and CPU doesn't cause a shutdown so I'm leaning towards it being the CPU/voltage scenario.

I received the Z440's heatsink and fan earlier today, so I went ahead and swapped the original fan over from the old heatsink (although I know you can just hang the 6th pin off the connector and the newer fan will work) and installed with Noctua NT-H2 once again, and I have to say that since doing so I've noticed a significant change in the system's cooling behavior... in short, it appears to work as it should now.

With the new heatsink installed and all other conditions the same, I'm seeing that the rear exhaust fan, memory fan, and CPU fans will all ramp up when the system is under load as tested in AIDA64 and Prime95 before the CPU hits 70*C with the fan speed increasing/decreasing by significant amounts compared to previously where only the CPU fan would ramp up at 85*C under BIOS 03.96 (which I'm currently running to test the stability for overclocking with the changes HP made in temperature controls). I find this to be quite interesting since, well, changing a heatsink shouldn't cause a behavioral change of this level... given the increased size of the heatsink and closer proximity to the rear memory fan shroud, is it possible that the the heat transfer from the surface area of the heatsink is now triggering the thermal sensor on the motherboard? I'm not 100% sure how it's detected with HP's motherboards so this one is out of my league so to speak.