I am working on a Z420 Workstation and I noticed that it is missing at least two fan and air baffle assembles. Here is a picture from a Google search showing the two assembles, circled in red, that I am missing. 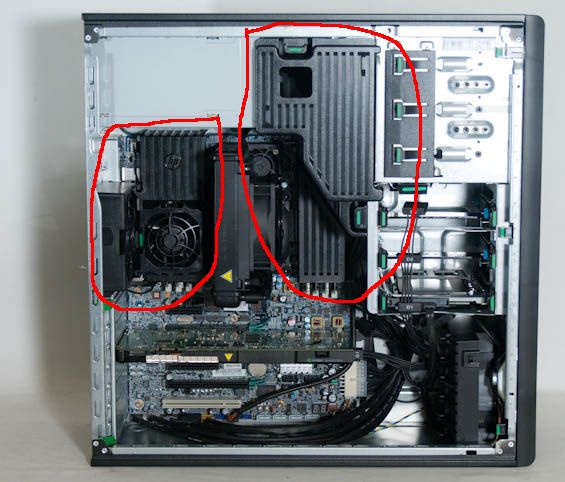 I also now notice that I am missing the fan in the lower right corner of the image.

Does anyone here know the part numbers for these three items? Maybe I can find them on Amazon or eBay.

I will be running this machine continuously and want to make sure it is being properly cooled. If these fans are not necessary for this configuration then I would appreciate knowing that too.

Here is more than you ever wanted to know, but I had some cut/paste notes handy:

Your circle on the left encompasses two items, one of which you likely have:

The front memory airflow guide is encircled in your right hand circle, and is passive.  No fan attached.  It uses the exhaust of the power supply fan to guide cooling are from out front up and across the front memory bank, and then out back.  A similar device was used in the earlier Z400, but they are not interchangable.  The Z420 version has option part number of C4J29AA, Spares P/N of 663346-001, and Assembly P/N of 663070-001. The AS P/N is what is embossed on the plastic surface of the duct. The Spares P/N is available from the HP listing found via Google search for "Z420 Spare Parts".  The v2 version of the Z420 motherboard allows use of the faster (1800 MHz) memory that the V2 processors can support, and this duct appears well worth installing if those fill the slots.

If you think you'll reduce heat by using any of the L rated memory forget it.... that 1.38v memory will run at 1.5v in all the HP workstations.  Takes a HP server to see the benefit.

Forgot to mention.... take a look at the Z440/Z640 stock single processor heatsink/fan on eBay.  Almost exactly 2x the cooling fin area, and all you need to do is hang the 6th plug hole out in space from the 5-pin ZX20 heatsink fan motherboard header.  That is what I do now....

Wow, what a reply! 😀 This is excellent!

You are correct that I already have the rear mounted case fan. Pardon my sloppy circle! 😇

I searched for 663069-001 on eBay and found a fan and airflow guide. It looks like something that ought to fit.

Searching for 663070-001 on eBay gave me the front airflow guide. I'm surprised it's so much more expensive than the rear memory cover!

I have access to heavily gutted XW4400, XW4600, and XW8400 machines waiting to be recycled. I know .. it looks very sad to see them like that. Next week I will try to get to them and see if they still have the front fan assemblies. Even if the bracket isn't there or is there but can't fit the Z420 then maybe I can at least grab a fan and zip-tie it to the inside of the case somehow.

Thanks for all of this great info! I really do appreciate it.

Search in this forum for "Ghetto Mod" and you will find some of my prior posts on installing a front HP case fan without having the black plastic custom fit fan holder.  There is a motherboard header right there for attaching a HP PWM 4-wire fan to increase your front-to-back air flow.

On the passive front air flow guide..... yep, the cost is a supply/demand issue.  Every Z420 had the rear memory cooler, but only the fastest ones got the front passive airflow guide.  Luckily I got a stash of these before the price went up.