Continuous red power button LED with increased fan speed after installing GeForce GTX 1060.  System is working but fans are running at 2x normal idle speeds and red power LED remains solid.  No beep or POST error messages on startup. Have updated BIOS, reset CMOS.  Any help to get the power LED back to blue and fans back to idle would be very much appreciated.

Should of also mentioned that I put the original GPU back in (Quadro 2000) to see if it fixes the problem, but the LED power light remains solid red with fans running faster than normal.

possible bad ram module, try with only one dimm

Thankyou for your suggestion DGroves.

I have tried each of the 4x (4gb) dimm modules I have, individually into slot 1. Red LED still remains each time.

Just as an additional side note I have already ran the UEFI version of the HP PC Hardware Diagnositics. Both the fast test and quick test reported no errors.  Have yet to run the extensive test.

Any other suggestions would be most welcome.

Found the BIST test on page 133 of the service manual.  Performed test as follows.  Power down and remove AC cable.  Remove all power connections to system board. In this case 2 plugs (an 8 pin & an 18pin). Insert AC cable back into power supply.  Green BIST led light should illuminate and PSU fan spins.  Light illuminated and fan spins for me, so we can confirm a pass and PSU is good.  Thanks for the suggestion.  Keep them coming. Much appreciated.

check your bios for the ambient temp reading and if zero, the sensor has failed

Ok. Firstly I have solved the red power led light issue.  Light is now blue.  When I reset the CMOS first time I just held the CMOS button in for a few secs. This time I actually removed the battery and re-installed it. That has worked.

But my fans are still spinning at higher rpms than normal idle speeds. System sensors report below 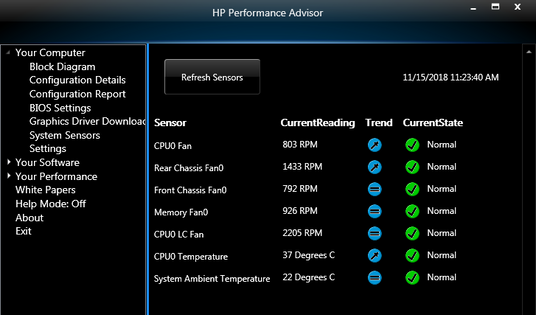 Normally I would have speeds of around 600 rpm and the CPU0 LC fan would be slightly higher.

With regards to the ambient temp sensor.  I found it's location on Z420. It's a trailing wire connected to the front led/power button and the sensor is located on the end of it, cable tied to the chassis behind the front fan. Covering the sensor between my fingers does indeed increase the ambient temp readings and fans do quickly ramp up to max . They also go back down when I let go of the sensor, so we can assume the temp sensor is working as it's supposed to.

So, the reason for the increased fans speeds when PC is not under any load still remains.  It's not too noisy, certainly not anywhere near when fans are at max, but I'm just used to it being a lot quiter when idle. Any other suggestions for things I should be looking at?

you can try replacing the fan, remove the rear case fan (or whichever fan is making the noise) look at the label for the maker/model number and google that number to find sellers of that item

your picture shows nothing out of place however, so i'm not sure if there is a issue do you have any cpu intensive apps running?

No intensive CPU apps running.  It's a completely fresh clean rebuild and install of Win10. Prior to installing the GTX 1060 it was running super quiet. Rpms around 600.  This is my old system which I have recently de-commisioned from it's life as an AutoCAD workstation which has been on 24/7 for the last 5 years so it has served me well. I have now upgraded to a Z4, so it's being handed down to my pre-teen son to use for gaming, hence the install of a 1060.  I have today ordered a set of Noctua low noise adapters, so hopefully they will help reduce the speeds/noise a little. I've also installed the HP Softpaq DM with the hope that maybe a future BIOS update (if there is one) will help in someway.

Thankyou so much for all your responses / suggestions.  It has been very helpful. I will give kudos to all your replies.  If I do ever solve it, I will update this thread.