Z620 Aftermarker CPU Cooler? / CPU Cooling shroud - necessary or can it be dispensed with?

I have a Z620 workstation with an E5-1620 V1 Xeon, like the build quality but the fan noise is appalling to maintain a suitable system temp, even 2 out of 6 is intolerably loud. Looking at replacing the CPU cooler for something with a bit more....Ooomph for want of a better term as I feel the stock cooler is undersized and the fan noisy and ineffectual for the thermal load, I have had previous computers with greater thermal output that emitted half the noise level. Considering a Noctua or an Arctic Cooling Freezer 34 E-Sports Duo, however concerned about clearance in relation the CPU cooler shroud. Is the shroud above the CPU cooler required or does it just marginally improve cooling performance?

I've posted in the forum here about using the HP 782501-001/749554-001 Z640/Z440 single processor build heatsink/fan on our Z620/Z420 builds.  The total cooling fin area for that is almost exactly twice that of the stock Z620/Z420 heatsink, and the Z620's memory cooling "saddle" fits over the heatsink perfectly with free passage of a couple of Post-It note thicknesses to spare.  It also has 4 cooling tubes, instead of the 3 in the Z420/Z620 stock one.  The HP fan attached is PWM and works perfectly with the ZX20's motherboard's PWM cooling system.  It is quieter because it can be, having a significantly higher cooling capacity.

This concept does not work if you're going to use a second CPU riser in a Z620.

The ZX20 stock heatsink has a 5-pin motherboard header fan plug end.  That for this Z440/Z640 heatsink has a 6-pin plug end.  The pins 5 and 6 are just grounds swung over from the first pin, so you can use the 6-pin plug on the ZX20 5-pin motherboard header by just hanging that pin 6 end out in space over the motherboard.  It projects out about 1/8".  The fans on the bigger one seem to run at lower RPMs because it cools so well.

About $20.00 USD including shipping from eBay.  I've done over 10 of these and it has worked very well.  The ZX40 sockets take different processors inside, but the dimensions for mounting a heatsink atop the socket are identical to those of the ZX20.  That is why this works....

while "SDH's" suggestion for single cpu builds on the z620 using a different HP cooling solution is a nice way to go as it's a HP workstation cooler from a different model so the build quality is there, and the cooling capacity in this case is actually increased over the stock cooler,.....however i'm not sure it's needed in non overclocked systems  but it's not something i can determine as i don't use a z620 (we use z800/820/940 systems)

i feel that most people who simply decide that the factory cooing is inadequate on these HP workstations overlook that these are premium  workstations in regards to price and build quality, and as such HP is not going to release a substandard workstation model that is not adequately cooled and as quiet as they can make it over it's specified operating range and that most so called fan or cpu improvements can actually degrade the workstation models performance

Can you launch HP Performance Advisor and grab a screenshot from the System Sensors tab (using the snipping tool). e.g. 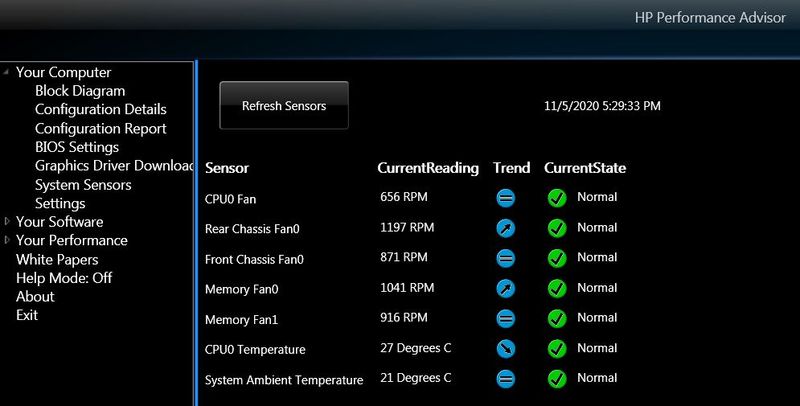 If you don't have the software installed then please install and run (it's free). I'm curious to see your internal ambient temperature and fan speeds.

Thanks for that, seems prices have risen, I'm not in the USA so perhaps that's why I'm not seeing any remotely near $20 in price (try 4 to 8 times that amount O.O)

Problem with the cooling is that you get either a slow quiet idle speed and a still low load speed causing 70-80C temp spikes (rather than setting a low idle speed and the PWM ramping up the fan speed in response to temperature as almost all other machines do) or you deal with a several thousand RPM idle speed and an even faster load speed to keep temps around 40-50C under load - I think HP dropped the ball on this one tbh....

Improved things slightly by replacing the front fan with one from arctic cooling which flows more air, spins slower and still responds to PWM commands. That combined with setting the thermal to 1* out of 6 (rather than the stock 0 or the 2-3 I tried previously) gives me a tolerable 55C max under load

I'll reinstall that and grab a screenshot. As mentioned above I swapped the front fan to one from arctic cooling and coupled with level 1 thermal (up from 0 default) results in tolerable noise levels and temps that max in the 50s even when running FaH (previously was hitting 80C despite new thermal paste and all vents cleaned and fans working)

I'm wondering how you overclocked yours? Do you have a link I could read? Thanks

There are quite a few threads on the forum discussing overclocking. Here's a start;