I attempted to swap it out with a known working Samsung 860 EVO 256GB M.2 SSD, but it fails to POST and hangs at the BIOS HP logo. This appears to be a bug (or "feature") in the UEFI firmware. There is at least one other unanswered topic in this forum about the same issue.

Is there any way to obtain a list (or personal experience) of known compatible SSDs for the t530? If I decide to give this upgrade another go, I'd like to at least be somewhat confident that the SSD will be compatible. I am interested in 128GB or larger drives.

Alternatively it'd be nice if a patched UEFI were released so I'm able to use the 860 EVO. I'm not going to get my hopes up, though.

The 860 EVO was at its latest firmware version when I tried this a few weeks ago. The t530 is running the latest BIOS available - 00.01.07 Rev.A. I tried the usual things like resetting CMOS.

I sent a private message to the author of that post I mentioned from 8/10/19. They said that the HP S700 PRO M.2 worked. However they're tough to find at all these days, especially in a capacity other than 128GB.

Maybe someone else has upgraded the SSD and can share their experience?

did you remove all existing partitions before installing in the t530? if so and it still did not boot try running DBAN on the ssd this will usually fix issues like you are having

I'm afraid that there's nothing for DBAN to erase. It's all zeroes.

The system hangs such that it is not even possible to interrupt the boot sequence to enter the BIOS menu.

The author from the other post suggested it might have something to do with the SATA controller on the AMD chip.

i would still run DBAN on the drive, as i said it can resolve issues like this

Sorry, running DBAN on a confirmed empty drive (I just read back all 250GB on the disk - not a single bit of data ever written either according to SMART) just sounds like voodoo. DBAN doesn't even have native SSD support so it'll do nothing except shorten the drive lifespan as there is, as I said, nothing on the drive.

It's most likely a firmware issue on the t530 - e.g. something not operating to the specification. Perhaps their hardware SATA controller is flawless (unlikely) but I doubt you can say the same for the driver in UEFI.

I also haven't ruled out that HP has intentionally blacklisted non-HP drives from working. IBM/Lenovo did the same thing on Thinkpads with PCI wireless cards. At least in that case it'd *tell* you what the issue was instead of just freezing up completely.

Is there a way to roll back to an earlier UEFI version? I saw in the changelogs at https://support.hp.com/us-en/drivers/selfservice/hp-t530-thin-client-series/16612050 that some releases have this listed: "Adds rollback prevention.".

we have run DBAN on drives (SSD's included) that have had various issues showing up or booting on systems and in most cases it has resolved the problem.

you asked for help and i've given you my best advice, running it will only take time nothing more.

you don't want to actually do a full erase, you want to see if DBAN sees any partition information and then remove that partition

I guess I wasn't clear enough - if the entire drive is zeroes, then there is no data (or remnants of data) on the drive (i.e. ones), and subsequently no partition table or partitions for DBAN to erase. That's why I'd assumed you were suggesting e.g. filling the entire disk with random data.

Anyhow, I couldn't find the HP S700 Pro for sale (I guess it's discontinued?) in capacities larger than 128GB for a decent price, so I took a gamble on a WD Red SA500 500GB M.2 drive. The t530 POSTs fine and the system is booted from the new drive now. 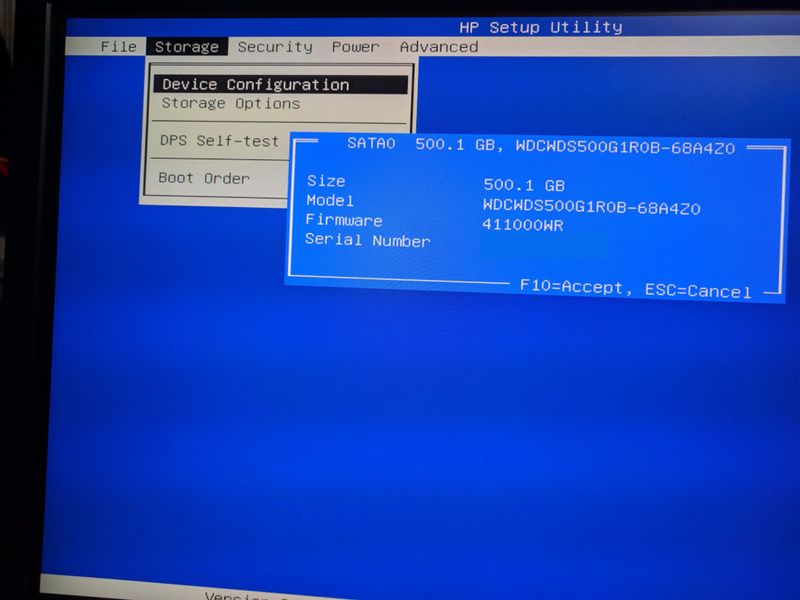