z420. Help! One AHCI 6Gb socket does not work! Is it possible to use a socket SCU 3Gb without RAID?

The situation is this.

4 SSDs and one CD-ROM are connected to the motherboard, that is five SATA sockets are occupied.

Now I need to connect another SSD, but for some reason one of the two high-speed SATA sockets AHCI 6Gb / s, namely the free socket № 1 does not work! At what the socket № 0, works normally, the SSD is connected to it and the system is loaded from it.

I have two questions in this regard:
1) Is it possible that this non-working socket № 1 AHCI 6Gb / s is not broken but simply programmatically disabled somewhere in the BIOS or somewhere else, if so, please tell me where to look for a solution to this problem? Or is it still a hardware failure and without professional repair socket № 1 will not work?

2) And the second question. I understand that the remaining 4 free 3Gb / s SCU connectors are for creating a RAID Array, right? And is there any possibility to use these connectors to connect additional SSDs in the normal mode of a single drive (without combining into a RAID Array)? Or is it impossible?
---
And in general, I will be grateful for any of your help, thoughts, and tips in solving my problem.

the z420 SCU sata ports are raid capable "not" raid specific,.... in other words they can be either raid or normal sata

leave the bios at AHCI+Raid defaults, do not change it this is the correct setting

one last thing, the intel RSTe (enterprise) driver v4.5 is required for OS earlier than windows 10 it's available on the HP z420 driver page under win 7 or win 8

Thank you very much for your answer and your willingness to help!

The fact that SCU SATA ports can be used even without RAID mode is very good news! Thanks! That means I have a chance!

At this point, on your advice, I have already enabled the "AHCI + Raid" mode in the BIOS, although I had to set the "disable" value for the "Intel VT" option in another section of the BIOS because otherwise, the computer could not boot (I did not I know if this is how it should be).

But even with "AHCI + Raid" enabled, I still can't see the SSD connected to any SCU connector, neither in Windows nor even in the BIOS.
So please tell me more specifically what should I do next?

And one more thing I didn't quite understand. If I have Win 10 x 64bit, then now I have to download and install the driver "Intel RSTe (enterprise) driver v4.5", is this driver only needed for earlier versions of Windows win 7 or win 8?

There is a way in BIOS to turn off a SATA port and make it invisible to the OS.  F10 into BIOS/ Security tab/ down to Device Security/ all the six SATA-only ports 0-5 down at the bottom of that page in BIOS should be available.  It would be odd for a prior owner to turn off SATA port 1 (the second one).  SATA port 0 and 1 are the only two 6Gb/s SATA III ports on the Z420 and Z620 motherboards and the other 4 SATA-only ports and all the SAS/SATA ones have 3Gb/s SATA II maximum SATA speeds.  DGroves can best speak for the Z820 motherboards.  I find the 4 white SAS/SATA type ports along the bottom edge still confusing.  I know the Z420/Z620 do not have a SAS chipset built into the motherboard whereas the Z820 does.  I have not experimented with these but I'll assume you need the RSTe driver set installed or these white ones won't work for SATA use.

An added thing to know is that some BIOS settings if not set properly during system install can result in missing drivers from the OS, leading to frustration because the missing drivers may not be evident from Device Manager as a yellow bang.  Having SATA emulation set in BIOS to IDE rather than RAID + AHCI is a classic example.  This is one good reason to set BIOS to Factory Defaults before a clean OS install, and save on the way out to ensure the Factory Default settings are flashed in.  Then do the OS install, and thereafter go back and reset your preferred BIOS settings.  I use a reminder list or Replicated Setup for that here, to clone BIOS settings as needed.

I'm currently working on a gold standard Z420 v2 clean install of W10 v2004.  I've chosen to load it from a single-sided DVD burned from the downloaded .iso for W10 (and it fits fine with 400MB spare room).  The whole storage controller drivers thing has taken some time to figure out.  I agree with DGroves that the best to currently use are from the Intel 4.5.10.1021 installer package, which installs drivers version 4.5.0.1234.  A bit confusing numbering scheme by Intel there...

You want Intel_RSTe_AHCI_Win_Drivers_GUI_CLI_CIM_4.5.10.1021 downloaded, and then unzip it.  Inside you'll see a multiple items including a folder entitled "GUI".  Inside that GUI folder is another zipped folder,  RSTe_4.5.10.1021_Install.  Once you unzip that you'll see 5 items inside... the second one down is the installer you want to launch (IATA_CD.exe) to install the two 4.5.0.1234 drivers which will replace the single Intel driver that W10 installs.  Why are there now two drivers loaded by this process?

This is because the W10 installer is not an RSTe installer... and the 4.5.10.1021 installer is.  There is money and licensing involved.  HP paid Intel for the licensing rights to use their RAID config software and its GUI interface, and also the Intel driver for the chipset that drives those 4 extra white ports present.  Those are in addition to the six SATA-only ports 0->5 (port 0 and 1 are gray, and ports 2-5 are black).  You need the licensed "e" enterprise level chipset driver to use those 4 extra white combined SAS/SATA ports.  The licensing goes with the motherboard... there is a background process that checks to ensure your motherboard is licensed properly, and then the correct installer can proceed when you launch it.  All the ZX20 motherboards are licensed for this advanced install but it takes having a correct RSTe installer to get all 10 of the on-motherboard SATA type ports to work (two gray, plus 4 black, plus 4 white): 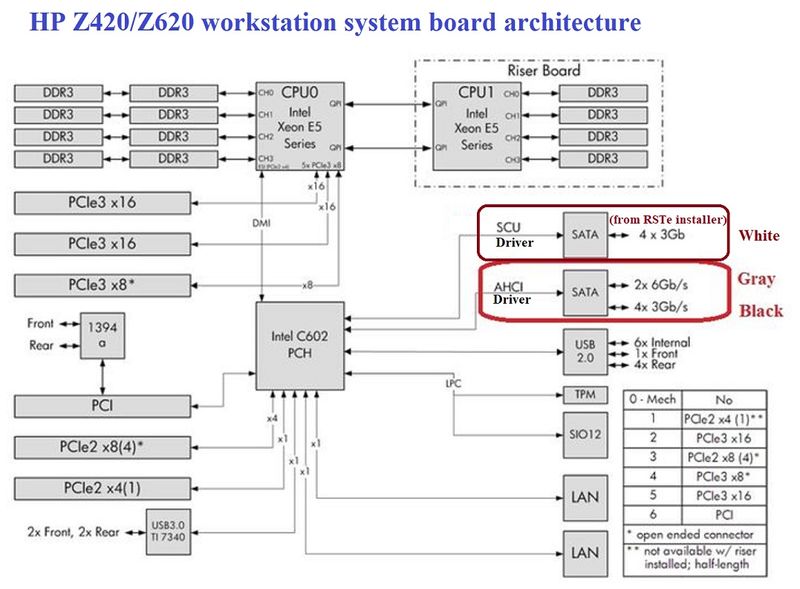 How to launch the correct installer?  There is a whole mess of installers inside that first big (122MB) zipped folder mentioned above, but below is the best way to go that I've found, and the process will overwrite other older and newer storage controller drivers that may be on a ZX20 build from prior upgrades from W7Pro64 to W10Pro64 from the past (or from a clean W10 install).  Get that smaller "GUI" folder mentioned above, unzip its content, and put the resulting folder on your desktop.  You don't need or want to use Device Manager to update the storage controllers drivers this way.  Go into that unzipped folder and launch IATA_CD.exe, running it as an administrator.  You may get a warning that your current driver W10 driver is newer than these (with the v2004 install it is 15.44.0.1015, dated 2/8/18).  Ignore that...  The driver install proceeds, and it will also install the RAID config & control software.  After the required restart you can go to Control Panel/ Programs and Features/ down to Intel RAID yadda yadda and uninstall that.  You can do the same uninstall from the W10/ Apps listing.  That RAID software is unnecessary and would be a waste of resources for us using SSDs or ZTDs.  Below is an image that may be handy for reference: 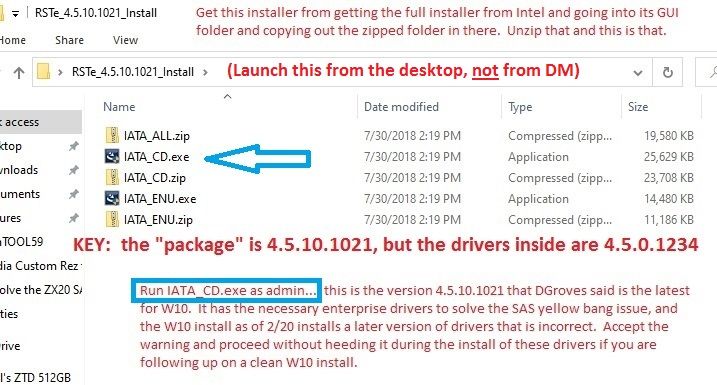 From Intel's ReadMe that comes with this installer: