I have a z820 with the latest BIOS and have installed of these memory sticks:

When I turn the computer on, it shows that the memory is running at 800Mhz.

Looking at Speccy, I see this: 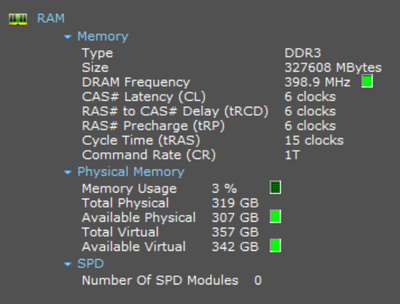 In CPU-Z I see this: 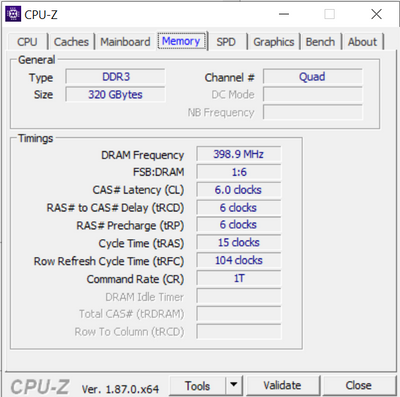 In the SPD panel, there is no information at all, all slots appear empty.

The sticks were installed in the order described on the case panel and total memory is recognized fine.

Though I am concerned about the speed. Am I not understanding something and all is alright, or there is truly something amiss here?

Thank you very much,

In CPU rendering, core count, memory speed and quantity, and disk speed are all important to optimize. There is some balance when considering core count to clock speed, but in general a slower CPU (up to a point) with higher core count will still work faster than a higher clock speed CPU with fewer cores. The higher clock speed (= higher single thread performance) though is essential if the system is also doing 3D modeling.

There is cost to doing this, but the E5-2687w's and the v1 motherboard still have a good value. Over time, many hours rendering time could be saved and a high core count v2 system will have a noticeably higher resale value.

CPU rendering is still noticeably higher quality, but I use GPU-acclerated CPU rendering (VRay) on a GTX 1070 Ti for smaller, and more numerous renderings.

As far as I know, the lowest CPU memory specification for a first series z820 is 1333 but only for the E5-2620 6C@2.0GHz.  As PC3 10600 is 1333MHz, there are several possibilities, including that particular model of RAM memory is not compatible with the z820 and in some wthe chipset doesn't  recognize/support it, a bad module running at 800 that means all the RAM is running at 800, a BIOS configuration setting, or other configuration situation. Dual CPU systems are more choosy about RAM. I've purchased used RAM for 3 of 5 of the HP z-series systems (the used system) and whenever I had used modules with the HP part number sticker they all worked.  A diversion to non-HP marked did not run properly. Used ECC registered too may have an incriclbe number of hours running in a server and be dodgy. Since 1993 I've only ever had two bad RAM modules (unsolvable training errors) and both were non-HP modules ECC reg used in the only dual processor HP I've had, z620 (2X E5-2690).

The CPU-Z readout is confusing "Total Physical  319 GB"  though the decimal point may by invisible and as mentioned the 0 modules. What does the Control Panel system readout say?

Hi BambiBoomZ :). Thank you very much!

I tried removing 2 sticks leaving a total of 8 (256gb) and the speed jumped to 1066. Removing 4 sticks again left the speed at 1066mhz.  Replacing all sticks returned the speed to 800mhz.

I’m wondering if it’s even a noticeable difference in performance for rendering stuff sometimes...

So many ways to get this wrong 🙂

You're very welcome. I think your reply and my revision to the reply crossed.

The experiment running faster on fewer modules causes me to believe that the z820 is not happy with that particular module.

Maybe I should try to return this memory and get the right sticks, HP branded...

I'll check with the seller and update this thread when the new memory comes.

This thought just occurred and I wonder if it's correct thinking:

The memory is slower than it optimally can be, but for rendering and other tasks where the CPU is doing most of the work, would this even be noticable?

I can see how if the main application of this machine was to be a ram disk or ram-based database, the speed would be incredibly important, but for rendering and other such tasks, would it matter?

Also I was wondering about the v2 of the 2687, it seems Intel lists the cores and speeds to be the same as the v1, were there other differences which could make it something I should trade out the v1 for?

I'm wondering if I can and should upgrade the CPUs to higher core versions, though it seems that the more cores, the slower the clock speeds usually. I don't think I've seen a 10 or 12 core xeon that has at least a 3.4Mhz clock speed, or at least a 3. There must be some, I'll look more.

In CPU rendering, core count, memory speed and quantity, and disk speed are all important to optimize. There is some balance when considering core count to clock speed, but in general a slower CPU (up to a point) with higher core count will still work faster than a higher clock speed CPU with fewer cores. The higher clock speed (= higher single thread performance) though is essential if the system is also doing 3D modeling.

There is cost to doing this, but the E5-2687w's and the v1 motherboard still have a good value. Over time, many hours rendering time could be saved and a high core count v2 system will have a noticeably higher resale value.

CPU rendering is still noticeably higher quality, but I use GPU-acclerated CPU rendering (VRay) on a GTX 1070 Ti for smaller, and more numerous renderings.

Thank you very much BambiBoomZ!

>> I assume you already the big poower supply

Yes but the liquid coolers are causing massive thermal throttling. I changed one of them to air cooling heatsink and the difference in temperature is insane! 20 degrees celcius cooler... I am wanting to replace the other one too.

I'm currently running a Samsung 860 1TB as the boot drive, a 970 Evo 1TB as the data/cache drive, and have a 4tb platter for archive space. It seems the 860 is quick enough and works well as a boot drive.

I've also got this machine running 320GB of ram, but that's probably so very much overkill. I'll look into the specs you've suggested.

Here's a bit more.... yes, that boot block date is proof you have a version 2 motherboard.  This means that with a 1866 MHz set of memory you can run a matching high speed V2 processor, or two, at full 1866 FSB speed (assuming the processor chosen is rated for that).  A slower rated processor with the same 1866 memory will run that memory at a slower speed.... 1600, for example.  In case you don't know, to run two processors both must have dual QPI links, and be identical.

A faster processor cannot speed up slow memory, of course, but a slower/throttled processor will slow down fast memory.

Having the 2013 boot block motherboard is very good news.

Not only do the E5-v2's as compared to first version in general have higher clock speeds, offer more cores, and higher RAM speeds, from the mention of thermal throttling, it appears that changing to the E5-2680 v2 or E5-2690 v2 at 130W on air cooling instead of the 150W E5-2687w can solve the heat problem as well.  The thermal throttling may have had an effect on the reported RAM speed, given that using fewer modules ran them at higher speeds.

The 320GB of RAM is impressive, but I wonder if that amount can be saturated and higher capacities of lesser clock speed RAM may in some circumstances present higher latency.  If you do have very large files with high memory saturation, such as  simulations or animation, consider 128GB of HP PC3-14900R (DDR3-1866) as 8X 16GB,  leaving capacity for another 8X 16GB.  That would provide a symmetrical configuration of a single complete channel at 64GB per processor.  I've noticed over time that at least in synthetic benchmarks that more RAM is not necessarilty faster, but of course, these are not running files as large as is the potential on a workstation. The particular use though may benefit from 256GB, but in any event, using the identical HP moules fro all the memory is recommended.  I had a z420 (E5-1620) and the memory performance was much better with 4X 4GB than 4X4GB + 4X 2GB.

Out of interest, I checked the highest Passmark system ratings for the z820:

The highest rated E5-2690 v2 system had a CPU= 24393 and the system with the highest memory mark is also using 128GB @ a score of 2338.  Note that the 2X E5-2690 v2 mark is higher than the best 2X E5-2687w v2, a situation in which the additional cores and slightly higher clock speed as compared to the 2680 v2 is producing more total clock cycles per unit time- and with less heat.  The 2690 v2 is about the same price as the 2687w v2 at the moment,  and the 2687w v2 will have a higher single-thread if your system is doing 3D modeling. Still, the necessary cooling solution 2687w v2 appears  to be somewhat elusive. There are 32 systems using the E5-2687w v2 so of course, those users have satisfctory cooling, but there have been several posts here recently from users with anomalous z820 liquid cooling: fans running too fast, high CPU temperatures, or the cooler is non-repsonsive to temperature. I would very much like to know why that HP carefully designed cooling system is quirky in that way.  I plugged a z420 liquid cooler into a z620: 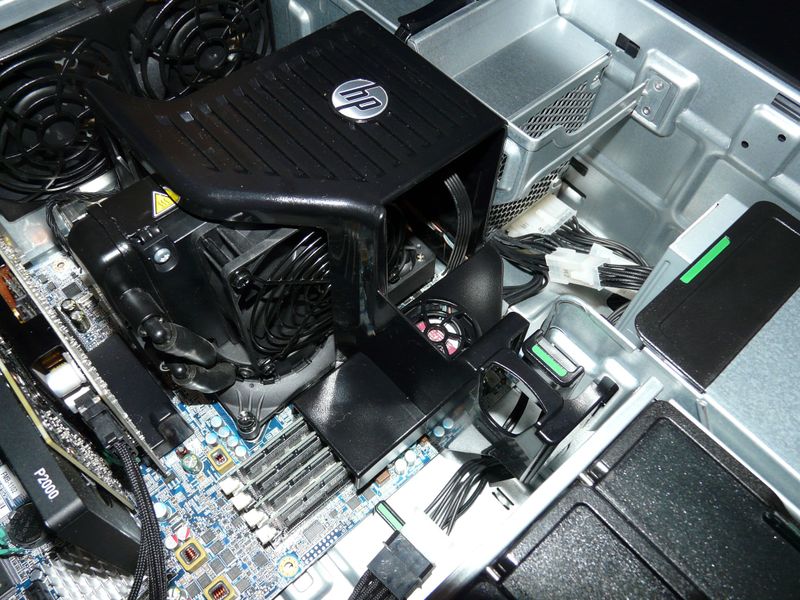 and connected the 5-pin link to the fan/heatsink connection and with no other configuration, it idles the E5-1680 v2 8C@ 4.3GHz at 29-33C.  That is a non standard installation of a part designed for another system and it's works perfectly, even if the fit under the z620 shroud must  impede the air flow.  A 2nd CPU riser can not be fitted, but single CPU's can have a strong advantage in single-thread perofrmance.

You disk configuration is quite good. I was using an 860 EVO 500GB in a z620 as the projects drive before changing to the 970 EVO M.2.  In ordinary use, the 970 does provide only a few seconds lesser loading time for large 3D CAD files, but large transfers are fantastic- 73GB in less than 3 minutes. The HP Z Turbo Drive M.2 256GB AHCI which runs the OS and programs is very fast (Passmark Disk = 14500) and again in ordinary use the starting time is very fast and program loading is faster, but only a few seconds here and there.  However, in CPU rendering the running time of larger renderings with  large file sizes is noticeably faster, but that system has single -thread as a priority as 90% of the time is 3D modeling.

Let us know what you end up doing. Consider installing Passmark Performance Test- there's a 30 day fully functional free trial- and running the current system on it so as to compare the before and after. The Cinebench R15 test is also relevant to a animation and/or rendering system.