My computer tells me I have no output or input devices found for sound. I have the little "x" in the red circle by the volume button. No sound comes out at all, for anything. I've sunk hours upon hours into searching and attempting fixes to no avail...hoping someone has a magic wand. Details (at least the ones it occurred to me to provide) follow, including all the steps I have already taken.

HP Envy All-In-One on Windows 10. I have never customized audio hardware or software; I have never attached external speakers or connected to bluetooth with this computer. The computer was not used for a few months earlier in the year, and when I turned it on again of course it needed updates. I'm not sure if the sound was working then or not. When I turned it back on after the updates it definitely was not, but I can't say for certain if those updates caused it, or something else. I wasn't doing anything unusual on the computer. (I am a fairly basic user -- word processing, internet, old-school games (ie not high-powered gaming.)

Computer has been restarted dozens of times over the course of various attempts based on responses to other people's similar questions.

Next, on the HP website, I downloaded the most recent Realtek audio driver listed for my computer. Nothing happened. In fact I have probably downloaded this driver about 6-8 times total, with no result. In case there was some problem with that particular driver, I also downloaded the second-most recent Realtek driver (a late 2019 driver) identified for my computer. No effect from that, either. It's as though they were never downloaded. They do not show up in Sound Settings or in Device Manager. The last time, I noted where the file was saved (I used the default, I wouldn't know where to save them): C:\SESETUP\SP98196.

I reset the BIOS to default settings. No effect.

I downloaded an updated BIOS from the HP website. No effect.

(I made another attempt at downloading the audio driver at this point, in case the BIOS had something to do with it. No effect.)

Following another set of online instructions, I attempted to use the Add Legacy Hardware function in Device Manager. Multiple Realtek drivers were listed in the Sound, video, and game controllers > Realtek folder (including multiples, possibly from each time I downloaded one of them?), but each time I attempted this (I think 4 times total), during the Install phase I got the BSOD RTKVHD64.sys stopcode. I tried with both the 2020 and late 2019 Realtek drivers, same results: crash, no (other) effect.

What is showing on Device Manager:

(1) "Sound, video, and game controllers" only visible after clicking Show Hidden Devices. Listed underneath are only:

(2) "Other devices" has 3, each of which say status "Currently, this hardware device is not connected to the computer. (Code 45) To fix this problem, reconnect this hardware device to the computer." Driver Provider: Unknown, Driver Date: Not available, Driver Version: Not available, Digital Signer: Not digitally signed. Clicking on Update Drivers gets message "Windows has successfully updated your drivers, Windows has finished installing the drivers for this device: [see below for details]." There was no effect from going through the process of clicking on Update drivers.

I am probably forgetting some things I tried, I only started taking notes on that today.

HELP, I'm at my wits' end with this. So many people have asked about this online, but I can't find any responses with information that resolves my problem.

you are using the wrong drivers

save the file anywhere you want

IF DM shows them missing or wrong THEY ARE<

NO OS TOLD BY YOU but is this W10-64 bit  and if yes only use those drivers,  that match only your exact PC

did you use HP.com support page and user your service tag number so that they can put you on the correct driver page?

your PC has product ID # what is that, and not told.

that number tells anyone what options were put inside Your PC DaY1 AND SOUND TOPS THAT LIST HERE.

I thank you did this all wrong.  ever step.

first is internet working, y/n if yes click just the sound line in DM, right click it and pick update,  this is the MS way to get sound working , step 1, this is and most times this is all you need to do , with internet working.

if not then HP.com is the only cure, and not telling product ID# code make that impossible

why well vast options on PC used world wide, even 2 PCs that look same and seem the same ARE NOT THE SAME.

no product id and no OS told those words wasted.  from what I consider a very simple problem.

do any OS upgrades ever, I can not know that either means you did not simple MS auto updates w10 v1507 to 20h2

what PC what OS.

what country, PC not the same in all.

the parts surfer does not list the mobo used, wow, that is amazingly bad.

use ONLY THIS. driver, ok?

down load the sp xxxxx exe any where you want then EXECUTE IT, (by double licking it ) EXE !!!

then reboot PC. SEE DM happy if not My guess PC is infected. 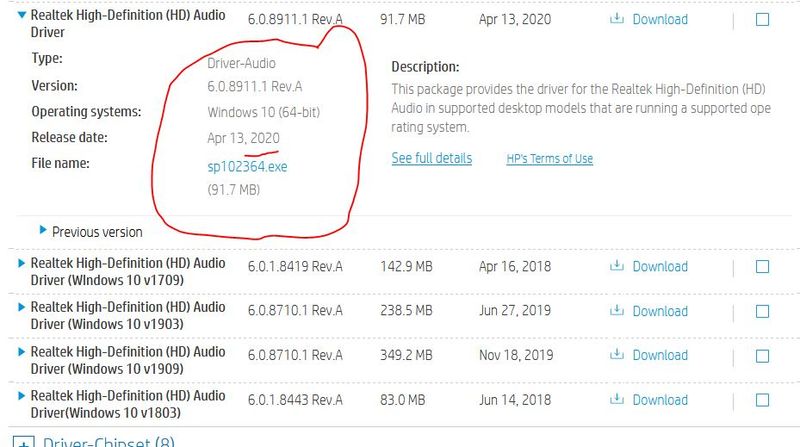 i see you loaded ever thing but the kitchen sink

now they are ALL GONE that nasty mess, of drivers !

reboot. ( even this step right now ,Ethernet wired to router the MS PNP servers can fix you PC driver next, like MAGIC.

then put that 2020 sound driver in folder (any) called my drivers is good.

go there and execute just that one driver the most new

for sure a PCs parked for long time years and updates now dead due to , TOO LARGE OF BUILD YEAR GAP  FAILED)

Regression testing by MS is not easy ever, 11 or more builds wow.(a side comment)

why not update 10 first,  get that current first then use only the 2020 driver sound from HP  I LINKED above.

W10 has your drivers at MS PnP server catalogs, so keep the internet working this whole time.

@Savvy2 Massively edited b/c I read I guess the last message first...or whichever one of them that seemed to be rather insulting. Sorry about that. Now that I see the other responses I will see what I can do with it, thank you.

"you are using the wrong drivers" -- I have been downloading the driver that HP.com says is the correct driver for my computer, which was determined based on letting HP detect my computer info. The driver you highlighted in the screenshot is exactly the one that I have downloaded multiple times. I don't understand your reference to "2 year old drivers" since that is a driver from 2020.

Yes, internet is working. One of the first things I tried was clicking on Update in Device Manager. No effect.

now they are ALL GONE that nasty mess, of drivers !" -- Per the above there are no drivers there to uninstall.

Ahhhh but just as I was about to give up again, based on your comments about Windows 10 Updates I checked on that. I had already checked it earlier and it said everything was up to date. When I checked tonight, it again said everything was up to date and that it had last checked for updates two days ago. But just in case, I clicked on the Check for Updates option, and it actually found two updates, for 20H2. After I had installed both of them, voila, sound was back, the three "Microsoft Streaming" things under Sound in Device Manager were gone, the Sound folder was no longer invisible, and Realtek and Intel(R) Display drivers were there. So thanks for mentioning this as a possible problem. Good to know for future reference, too, that even if Windows Update tells me there are no updates...there may in fact be updates!

Tracking this here for others who may be scouring these forums for answers like I was.

I have the same problem. This has been an ongoing issue for over a year. After a Windows Update I lost sound. I was able to roll back the update and that fixed it but you are unable to turn off updates in Windows for more than 30 days. When it updated again I lost sound.  I've run the HP diagnostic programs. One - lets me do a sound check and I can hear the tones, the other Windows diagnostic program says I don't have a sound device installed.  I've updated the computer with the latest drivers/Bios etc. and no results.  I used the HP diagnostic programs and web site to get the latest drivers.

I have the same model of the Envy all in one.