Several months ago, I swapped a customer's HP 260-p121nd harddrive with a Samsung 850 EVO 250GB SSD which was working great with Windows 10.

A week ago, the customer returned; the computer had performed a biosupdate (F.34) and since then, would not start Windows anymore and got stuck displaying the HP logo at boot.

Pressing Esc when booting results in a screen displaying a summary of the computer's components but the blue selectionscreen (from which to go to bios, select boot device etc) will not pop up and the computer freezes at this point.

When the original harddisk is connected the system boots up normally and the blue selection menu (Esc at boot) will show and work. Other SSD's, the 860 Evo and the Crucial MX300 did not work either.

I read several reports of hp biosupdates causing ssd's not to work anymore. In some cases, a biosrollback would solve this.

On this particular system though, I could not get a biosrollback to work; using Win+B will produce 8 beeps but the screen stays black and the bios recovery environment won't show, using HP Diagnostics and from there firmwaremanagement constantly gives a "signature file missing" error when trying to rollback to an earlier version downloaded from HP itself..

Another system which I tried to upgrade, a HP 24-e040nd new out of the box, displayed exactly the same behaviour when I installed a SSD.

-is there any other way to rollback the bios to an earlier working version like F.16?

-is there any way to get the SSD to work with the current bios F.34?

> from there firmwaremanagement constantly gives a "signature file missing" error when trying to rollback to an earlier version downloaded from HP itself..

Does the folder that contains the actual BIOS-update file also contain the "signature" file ?

Three items to try based on previous BIOS update history.

1. Disable fast boot in the BIOS.  It's under Secure Boot Configuration.

2. Uncheck turn on fast startup in Windows. Look under the power plan "change settings that are currently unavailable".

Once you get the above working correctly, then try a fresh copy of W10 on the SSD. A non FCU (fall creators update) would be my first choice.  Again after the fresh install, look the settings for #2 and #3.

If the above settings solves your issue then HP has a BIOS issue.

Thanks for your reply mdklassen.

I'm also corresponding with HP Support over this problem, the employee I spoke confirmed it's intentionally not possible to downgrade from this bios seeing as F.34 was specifically released to tackle the Spectre and Meltdown vulnerabilities.

He asked me for more data namely the brand and type SSD (Samsung 850 EVO 250GB), the brand and type of memory (the, at purchase already present, 4GB Kingston module, HP partnumber 855845-H71) and whether or not a Windows installation was present on said SSD (yes, a clean install of Windows 10 Home). Not that this latter fact matters as two other SSD's, new out of the box with no data on it whatsoever, caused the exact same problem.

I replied and am currently waiting for response.

1) There is no fast boot option. Not under Secure Boot Configuration, nor in the rest of the available settings.

2) I can't even start Windows. Also, two other, new out of the box, SSD's cause this exact same issue.

I tried installing Windows 10 fresh from USB (made with Microsoft's Media Creation tool) but encounter exactly the same issue; either the computer hangs displaying the HP logo or, when presseing Esc to enter the selection menu (to try and press F9 to boot) the system crashes displaying a post-screen.

As far as I can conclude, it does not matter what and if any data is present on the SSD; the system just crashes if there's any SSD connected to SATA.

I'm also corresponding with HP Support over this problem, the employee I spoke confirmed it's intentionally not possible to downgrade from this bios seeing as F.34 was specifically released to tackle the Spectre and Meltdown vulnerabilities.

However, note that Intel "pulled" the first version of the Meltdown/Spectre remediation, in January 2018.

For many models, HP issued a new BIOS-update that "regressed" the BIOS to an earlier version.

But, they have not done so, yet, for your system.

HP and Intel have released a newer Meltdown/Spectre remediation for the newest Intel processors, and seem to be working "backwards" -- fixing "recent" processors before tackling "older" processors.

The Fast Boot disable option that I recommended was based on the BIOS initially delivered with your PC.  If HP took it away then contact HP Support. 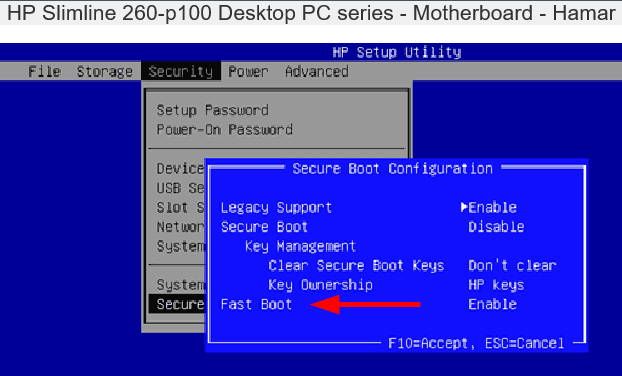 Don't try to boot with a cloned disk. Disconnect the original HD and use the same motherboard SATA port.

Could somebody explain to me how's that even possible (if at all)?

> Could somebody explain to me how's that even possible (if at all)?

If the BIOS has a programming error, when it is detecting & categorizing "plug-and-play" devices, such as a SSD, then an "unexpected result" can occur.

But also could be someting with Secure Boot configuration (and I'm not really up to speed what's this exactly and why this would be a problem) - so I suspect that's maybe something fishy there.

(Just went into my BIOS and there's a red warning message when one tries to enter Secure Boot configuration - gave it a pass this time as my PC boots / works okay and I rather keep it this way!)

In either case I will keep an eye on this & the other thread to see what's the outcome.