I'm getting a consistent error message upon booting my unit.

Have you tried replacing this component ?

Search on eBay or Amazon, by the HP part-number, to see if you can find an inexpensive replacement.

HP Recommended
I haven't tried to replace it as this is an all-in-one unit. it. Is there no other troubleshooting other than replacing the part to correct the error?
0 Kudos

> I haven't tried to replace it as this is an all-in-one unit.

Yes, but you have an "external" power-supply, that is a separate piece.

One end connects to an AC wall-socket, and the other end connect to a socket in the back of the All-In-One.

> Is there no other troubleshooting other than replacing the part to correct the error?

There exists a "multimeter", that can measure the actual output of the power-supply, e.g., "15 Volts and 5 Amperes".

Read the label on the "brick" in the middle of the power-supply, for the specifications for the output, and compare those values with the readings from the multimeter.

of a multimeter testing a power-supply, showing an actual output of 1.425 Amperes.

(Remove the "blank" before the string 'jpg'.) 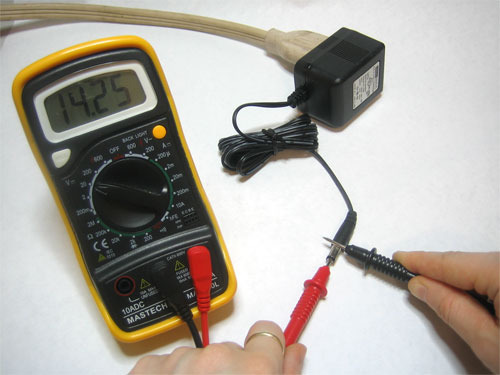 I, too, consistently get this error and I understand the suggested fix (replace AC adaptor).  However, I would like to know what caused this/can it be prevented.  (I have owned many HP devices and have gone years without having to replace power cords.  I started seeing this error when I moved the All-in-One computer from one room to another.)

Thanks for your time.

> I would like to know what caused this/can it be prevented.

It was caused by a few factors:

* manufactured by the "lowest bidder", skimping on "quality" components.

Years ago, on the assembly-line in a Ford automobile factory, "testing" the car-radio consisted of turning the radio on, and hearing "static".  Too many defective radios ended-up at the retail dealerships.  Ford had to retrain the workers to turn the radio on, and tune to a few stations, before "passing" the radio.

* rough handling of the unit, either pre-sale, or post-sale, causing damage.

> I have owned many HP devices and have gone years without having to replace power cords.

So, are you saying that 95% of HP computers that you have purchased do not have the problem?

>  I started seeing this error when I moved the All-in-One computer from one room to another.

A statistician would say "correlation does not imply causality", i.e., moving it cannot be "proved" to be the cause of the problem. Maybe, just "disturbing" it (after sitting in exactly the same place for years) caused the problem.

Impossible to prove, of course.

Thanks for your response!  It was both informative and hillariously entertaining.

I realize this is an old thread but I thought I should mention what helped me out with my recent 517 power supply error.
I simply started going over the power adapter cables to make sure that all cables were plugged in correctly and to my surprise the cable on the back of my (all-in-one HP) computer wasn't fully plugged in but a bit loose. A simple push and the error never showed up again.