Hi, about 5 days ago my laptop began to randomly crash seemingly out of nowhere. Each crash results in a black screen with large white pixelations rapidly flashing in a seemingly random pattern: 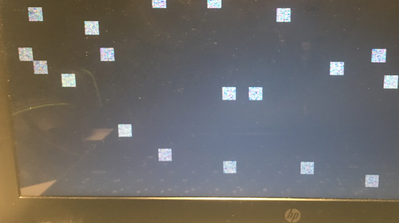 I found this while trying to troubleshoot and it looks identical to what happens to me but I couldn't find a solution.

During each crash the laptop becomes unresponsive and these squares flash for around 10-20 seconds before it shuts off and attempts to restart. Sometimes the 3.2 blinking code appears on the left hand caps lock key during restart, sometimes it powers on for ~1.5 seconds before shutting off again (usually several times in a row) and sometimes it comes up with a Cmos checksum error all before eventually starting normally afterwards.

So far I've tried cleaning the inside, removing the battery, reseating the memory, and using windows diagnostics (both the memory and hardware diagnostics appear to come up with no issue, but an extensive diagnostic from boot inevitably crashes ~25-30% of the way in with the aforementioned symptoms). The only interesting change was that after battery removal the Cmos checksum error began to appear but other than that everything else remained the same.

I should note that the battery was swollen when I removed it but I never noticed any significant change to the casing. Other than that however I'm completely clueless as to what could have caused it or how I should go about fixing it. The reliability history shows a number of installations and updates coinciding with the first of the crashes:

Any help would be greatly appreciated, thanks !

I recommend you follow the below steps and check if it helps.