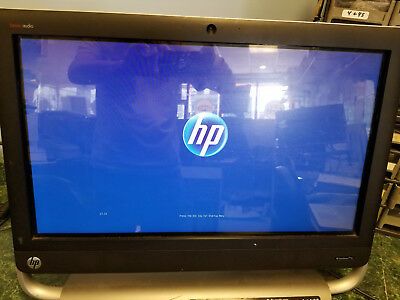 My all in one touchsmart 520 desktop is this state. When I turened power on it will come like this and stucks there. When I press some keys like F1, F8... It starts booting, and stuck there. 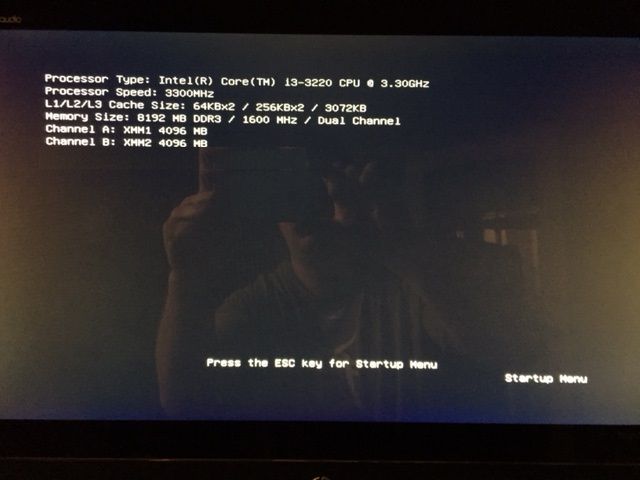 I have tried whatever is possible with Keyboard but to no avail please help me? What might be the problem?

First:- Turn off the computer, press and hold the PWR button for 4 seconds.

Then - Leave only keyboard and mouse connected, disconnect all externally connected
devices such as Docking Station, USB storage devices, displays, and printers.
Unplug the AC adapter from the computer.

Next - Press and Hold the Power button for 15 seconds to Hard Reset.
Rinse and Repeat

AND/OR - Power on your PC, press Esc (repeatedly), then F2 at the prompt.
Choose System Tests (Fast Test does a 4 minute hardware check).

AND/OR - If you’re using multiple displays, try projecting video to a different monitor.
Press the Windows Logo key + P, select a display, and then press Enter.

I'm having the same problem, except for that I can't get to the BIOS screen at all. Upon bootup, the initial blue screen appears and freezes there and I can't push Escape on my keyboard to get to the BIOS setup, since my USB keyboard won't work at all. I plugged it into all six of my USB ports, but it wouldn't work on any of them.

I should give some backstory. Last night I attempted to upgrade my RAM, but after installing it, my computer froze at the bootup screen. Because of that, I assumed that the RAM must not be compatible with my PC, so I uninstalled it and replaced it with the original RAM that came with the computer. However, after turning the computer on again, the same result occurred. The computer froze at the boot screen. I don't understand why. I tried multiple solutions. I installed one stick of RAM in each slot by themselves and switched the two sticks between the two slots to check if possibly there were a problem with the RAM suddenly, but got the same result. I tried resetting the BIOS by removing the CMOS battery for over five minutes, but again got the same result. I even unattached the HDD to see if I could get the "No OS Found" error, but it still froze at the same spot with no error messages. The only time I get a different result is when I don't have any RAM installed at all. When I turn the computer on then, I get loud beeping sounds and the computer doesn't try booting at all.

This makes no sense because the computer worked perfectly before I tried installing the new RAM, yet now it doesn't work at all despite using the same RAM. Why would it freeze at the boot screen? Why won't my USB keyboard work so that I can get into the BIOS setup? I hope I didn't somehow break the motherboard or some component on it. I've upgraded computers many times and this has never happened. Any help would be appreciated.

Edit: Just to add to my confusion about the keyboard not working, I just tested my laser USB mouse in the four USB 2.0 ports of my computer and it gets power from all four of them, so why doesn't the keyboard?

Turn off the computer, and then connect the power cord.
Press and hold the Windows key and the B key at the same time, and then press and hold the power button for 2 to 3 seconds.
Release the Power button but continue pressing the Windows and B keys. You might hear a series of beeps.
The HP BIOS Update screen displays and the recovery begins automatically. Follow any on-screen prompts to continue the startup to complete the recovery.
HP BIOS Update recovery in progress

If the HP BIOS Update screen does not display, repeat the previous steps but press the Windows key and the V key. If the screen still does not display, your computer might not support the feature or there is a hard drive issue. Continue to the next step to install a BIOS recovery file from the HP website.
If the Power light turns off, the Power button was held too long. Repeat the previous steps, making sure to hold the button for only 2 to 3 seconds.

Hello, thanks for your advice, but as I mentioned three times in my prior post, my keyboard doesn't work for some reason when I boot up the computer. It gets no power, no matter which USB port I plug it into. Therefore, the steps you just described did not work for me. I still tried following the steps, just in case they miraculously worked, but they didn't, unfortunately.