It has been a while since anyone has replied. Simply ask a new question if you would like to start the discussion again.
rms401
New member
4 2 0 0
Message 1 of 6
6,247
Flag Post

I found a thread about adding an m.2 SSD to this desktop. This is a new post about the same issues.  I bought a Crucial 1TB SATA drive and plugged it into the m.2 slot on my HP SLimline 290-p0014. The Bios wouldn't recognize it. I was confused but after reading the other thread closely,  it looks like you need a NVME m.2 SSD. It also looks like it won't run at the fastest speeds in the m.2 slot on the Menlow MB. I still don't understand why. Is this something that HP has done to the MB? Can it be changed?

I saw that there was a PCIe slot on the Menlo board.  From what Trinlv said in other thread, you can get an adapter for the PCIe x16 slot that will give you a NVME m.2 connector and full speed on the SSD. Thank you Trinlv. I am following your lead and buying the Startech card along with a 1TB version of the Samsung 970 NVMe M.2. I sure hope that there is no quirk with the 1tb card since your 500gb worked great. Anyone used the 1tb card?

One last question: Can a 3rd SSD be added to the open m.2 slot after using the PCIe x 16 slot? I process hundreds of large images (stacked for astrophotography) and will need more fast storage later.

if you need lots of drive space then might i point out that your current slimline system is not really suited to the task, and you might want to consider a system that has better expandability like a mini tower based system

your SSD must match the M.2 keying of the M.2 slot and ssd's can found in b key, mkey and combo b+m keying

next the M.2 connector on the motherboard (or any other location) is just that, a multi purpose connector, and said connector can be wired up as a SATA or NVME or even a USB device this causes confusion because people think the connector is the ssd interface standard and that means it's allways for (insert interface NVME/SATA/USB device) here when it's not ,the connector is whatever interface the maker decides it is

last using a M.2 PCI-e based card, (again the B and M keying is in play) determines the speed of the SSD, and the card can be a nvme 4x (if the system supports UEFI and the SSD boot code)  or a 4x SATA based SSD for legacy bios's that lack the SSD boot code in the bios (older pre x99 chipset systems)

not all systems can run several PCI-e ssd 4x cards at once due to limitations of the motherboard chipset/cpu. lowend intel cpu's have limited pcie lanes (20 or so) as opposed to the higher end cpu's that have 40 or more AMD based systems are much better in this respect as they do not limit pcie lanes any current amd cpu no matter if a low cost or high end has the full allotment of lanes available

Thanks for your answer. I still need to know if the m.2 connector uses a SATA or NVME protocol on the 290-p0014 with Menlow motherboard. And, If I can connect an SSD to both the PCIe slot and the m.2 connector.

What I need is enough fast storage to process the data. I have plenty of USB type disk space for slower access. With a single SATA SSD right now, that is the bottleneck for data processing. Disk is at 100% while the CPUs waits.

you were give all the information nessary for you to determine the SSD type you need,... if you look at the socket keying you will have your answer. all current chipsets made within the last 14 months or so are UEFI bios and support nvme

yes, you can run both a M.2 and a PCIe based card at the same time

Nope. You didn't realize - I guess - that the m.2 slot is keyed for both types of cards. I didn't use it anyway since another user reported that the m.2 slot doesn't perform as well as the PCIe x16 slot. I believe he said it was only SATA speeds. 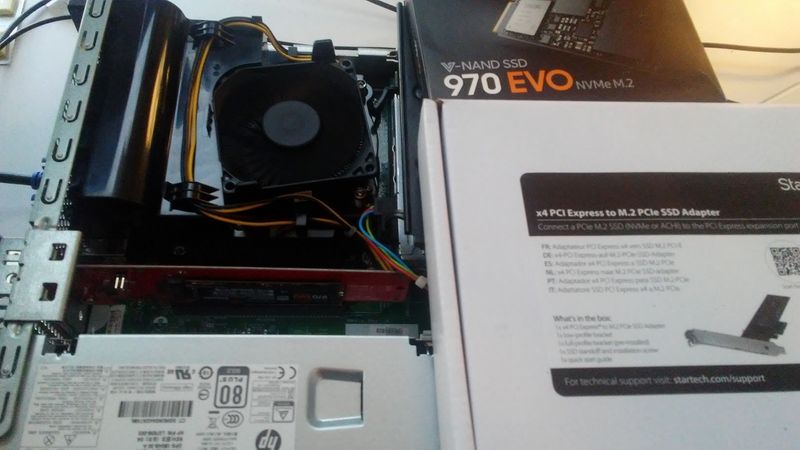 SSD to the m.2 slot on the card and inserted into the PCIe slot on the motherboard. Wow, 4-5 times faster than the SATA SSD.

If you want speed, get the Startech PCIe card (red card in picture) for the Slimline 290-p0014. Now I have what I need in a compact desktop. I actually could have bought a larger tower but this desktop has all the slots I need and was $300 cheaper than any tower I could find with the i7-8700. The only limit that I may regret, is that the Menlo MB only has two memory slots. That means a max of 32gb memory. That is more than I need now.

I have the same computer as you and I like the way you used the pci port to add an M.2 SSD

Can you tell me exactly which model Startech card you used for your upgrade or direct me to the website for the right model card?