My 1.5 year old desktop started behaving erratically a month ago.  I was playing a game on Steam, and suddenly "blooms" of color (I don't know how else to describe it, I've never seen it before in 35 years of computing, it was like someone squeezed a blob of paint into the middle of the screen) appeared on screen.  This was followed shortly thereafter by a reboot.  I was perplexed, but didn't think much of it - I was playing a game that was in beta so figured it was bad code.  Then it happened again.

Then the video just started blanking out after the computer was on for a bit and left idle on a web browser.  Sometimes blanking to black, sometimes to white.  The computer seems to be still running when this happens (most of the time, sometimes it will just reboot), and I can leave it "forever" and nothing happens or comes back to working.  I eventually have to hard reboot it.

I have discovered over time that if I try to launch a game or play video in a browser after the computer comes back, that seems to speed up the crash to happen pretty quickly.

I have my computer case open, the fans are all running normally, my house is quite cool, and the OMEN program that shows the computer temp has never gotten out of the green, low numbers.  I very much doubt it is a temperature problem.

I eventually tried other diagnostic boot steps during bootup.  Restoring to previous restore points didn't work.  Repairing windows didn't work.  It's been almost a month now, so I finally went nuclear and reinstalled windows (accidentally losing my iphone backups, arrg!), and within 10 minutes after getting through the "new" windows setup process the video loss and crashing was back.

So I've basically ruled out it being a windows or driver problem, right?  At this point it has to be a hardware issue, I think.  But I have no idea how to tell what component is dying.  I am guessing one of:

I have no idea how to test the video card or motherboard for issues.  Can anyone provide some pointers to some diagnostic tools that would help me figure this out?

If it's the video card, what's the best way for me to get a replacement?  HP or newegg or ebay?  Currently it has a GeForce RTX 2080, should I just get the same one (and if so, there seem to be a lot of different varieties of this card out there, I'm not sure how to get the right one), or is there some upgrade I should be considering that will fit in my rig, considering it is 2 years later and newer better stuff is out there?  (I have the 500W power supply.)

If it's the motherboard, is it even worth trying to fix?  If so, any pointers for getting the replacement and instructions for doing so?

I am reasonably handy with computers after 35 years using them, but mostly on the software side.  I can do some simple-to-moderately complex stuff on the hardware end, but no soldering or anything like that.  I've never built a rig from scratch, but it's probably not beyond me, just not how I want to spend 10 hours.  I have clumsy thumbs.

Thanks in advance for any assistance!

Bumping for the weekend crowd.

Any advice or suggestions anyone can provide?  Should I post in a different community forum?

Aside from bumping being "silly".

Your unit is 2 years old this month.

In this dialogue, clean means to blow out slot or fan with compressed air. (read directions). If it spits liquid, not good).

3) Clean CPU fan with compressed air. Get into the heatsink fins to get out the crud. Tobacco pipe cleaners are your best friend for the space between heatsink fins.

My machine was purchased 11/26/2018 and delivered in December of that year a few weeks later, so it is just under 1 year, 9 months old as of today.  Are you suggesting that it may still be covered by warranty?  I think the warranty was only 1 year.

I had done many, but not all, of the things you suggested previously, but I did them all (again), step by step.

* Removed the RAM, cleaned the slots with air, re-seated the RAM

* Cleaned the CPU fan with air.  Used Q tips as much as possible on the heatsink fins, but these fins are much longer and mostly covered by the fan, it was pretty awkward so I couldn't really do this well.

* Cleaned all grills with air.

* Cleaned everywhere else I could see with air.

It is worth noting that there was not much dust, as I had cleaned the case with air previously.  The Q tips did bring out a little bit of caked on dust, mainly from the graphics card fan, but nothing extravagent.

I waited a bit to make sure everything was dry and clean, then powered back up.  After getting Windows back up and running, unfortunately the same problem occurred within about 10 minutes.  First the screen went to a nice shade of pink: 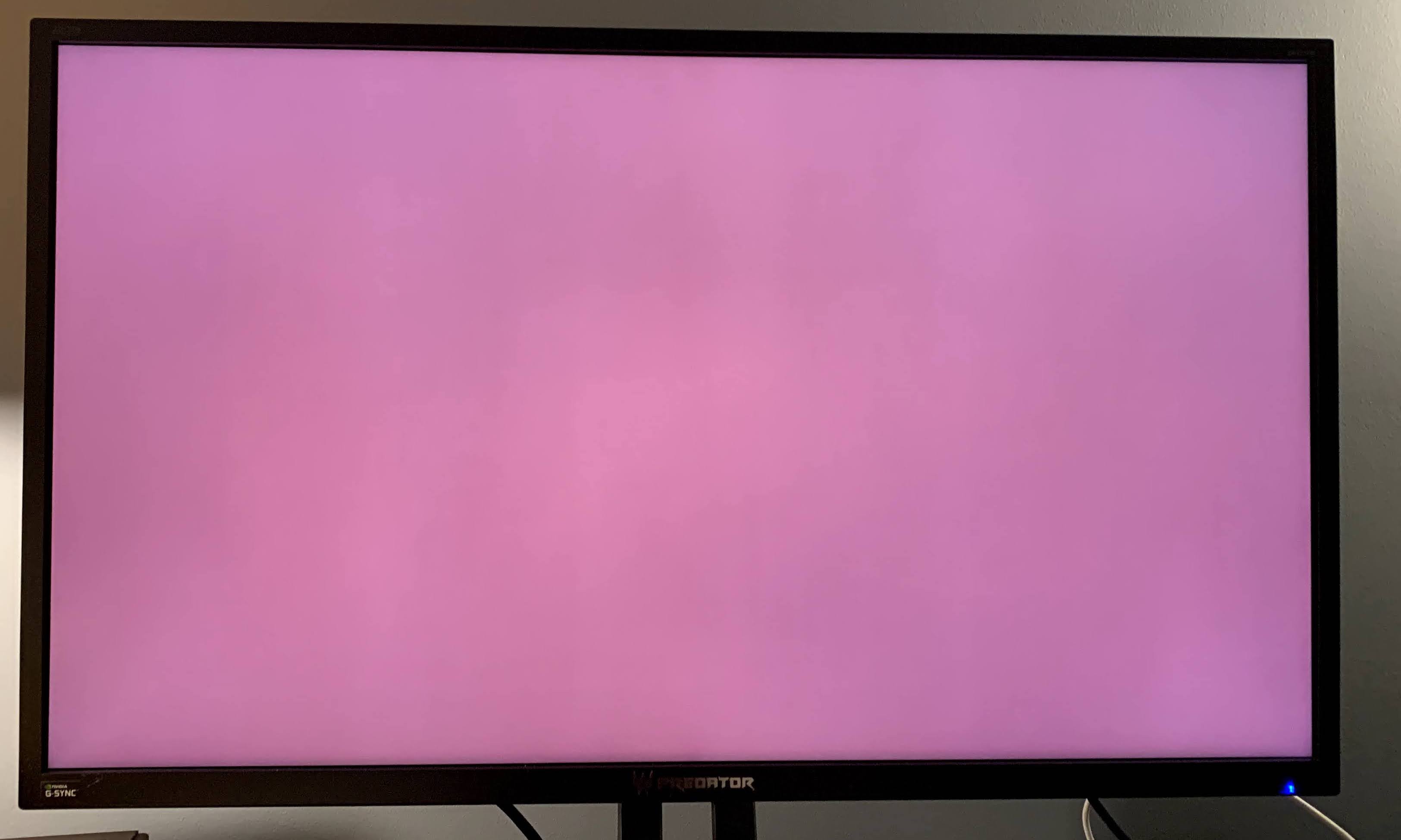 Then a minute or so later it went blank as the DP video signal was lost or degraded, and then a few minutes later my speakers made a loud sound as the computer spontaneously rebooted.  But the video card still wasn't working, so while I could hear everything spinning back up, nothing came up on screen and my monitor still showed no video signal.  Eventually I had to hard power down, as usual.

I am open to (and desperate for) other suggestions!

Either for how to diagnose what is broken, how to fix, or what to replace.  If replacing the graphics card, I'm not married to needing a top of the line card (in all honesty I barely use the capabilities in this one), but I am open to getting one that is 1-2 years newer as well, if there have been advances making that worthwhile.

The warranty was only for 1 year.  Download the latest complete software package for your video card, if possible.  If you can get the package, then delete the current software and drivers. Re-boot and install the new package.

BTW<> have you changed or added a program that forces CPU or GPU changes (overclocking ? ).