I have a Z800 and installed a new graphics card and suddenly my HDD (Raid) is really really slow. Is 100% active most of the time when something from the drive is used (OS is on a SSD, some programs on RAID) and has read/write speeds of 1~10MB/s. The setup worked fine before. I went from a GTX 670 to a GTX 1070. I don't have the old GPU here at the moment so I can't test the speed with the old card, I will do this later on, but the card itself is good. What can cause the disk to throttle this hard? Is there something I can test?

I also had a complete sudden shutdown of the system when I played a game. I don't think the GPU was under a big load but the raid drive was. Can this be a PSU problem? Can a malfunctioning psu throttle my raid?

This is my setup:

Screenshot from task manager to give an idea: 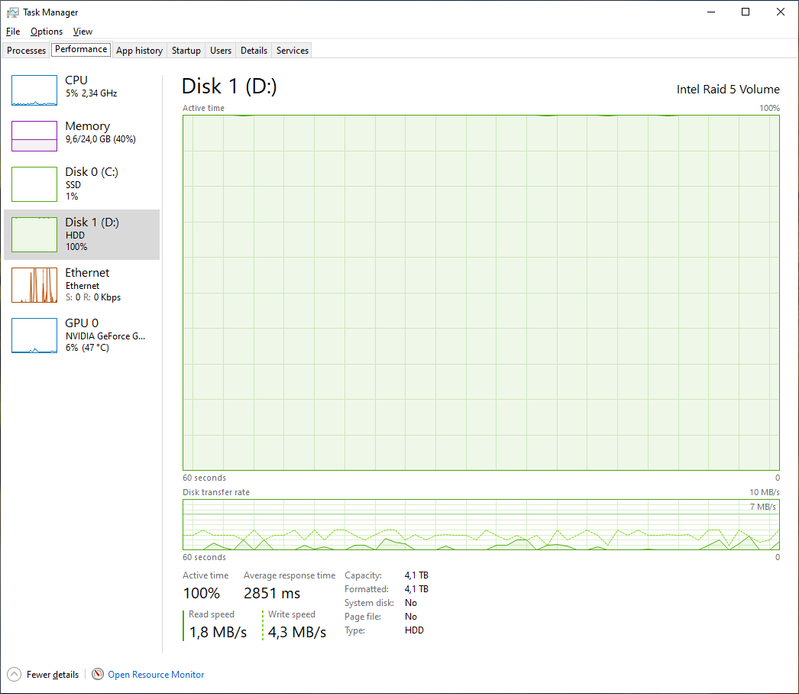 I think I found the problem....

This probably causes the problem? Why would this make this drive so slow?

What can I do now? Can I fix/repair this? Is the 4th drive defective now? I think it's caused after the sudden shutdown of the system, can this be true? During the shutdown I was playing a game that was stored on the RAID drive.

I have a backup of the most important data of this raid drive. I'll double check the data again. I don't mind to fix the drive with the possibility for future failure if I can put the drives back into raid again.

changing a video card will not affect a raid array...period end of discussion on this subject

your picture of the array however clearly shows a failing/failed drive (marked in red) this drive needs to be replaced with a drive of the same model if possible or one of the same/larger capacity and speed (IE-spindle rpm and interface SATA  3 or 6 7200rpm) once the array is repaired it will resume speed. note that if another drive fails all data on the array will be gone forever

please read the hp docs on how to create/service a z800 array, you will be using option #4 (recovery)

I couldn't find this. I looked again and I see it now. I overlooked it because it was listed with business pc. Sorry for that. Can someone move this to the right section?

changing a video card will not affect a raid array...period end of discussion on this subject

I somehow had a sudden shutdown. I don't know if my GPU triggered this or some other parts failing. I thought, maybe if the  GPU triggered a crash/shutdown it might had caused a drive to become corrupted (the game I was playing was on raid)

- Can a failing raid cause a sudden shutdown/crash?

- Can I test if my GPU is bad and causing the shutdown/crash? (Can I log this somewhere?)

your picture of the array however clearly shows a failing/failed drive (marked in red) this drive needs to be replaced with a drive of the same model if possible or one of the same/larger capacity and speed (IE-spindle rpm and interface SATA  3 or 6 7200rpm) once the array is repaired it will resume speed. note that if another drive fails all data on the array will be gone forever

I already had a backup of this drive. I manage to fix and rebuild the raid by using the Intel Rapid Storage Technology utilities. I marked the drive as normal and rebuild the raid. I know this comes with risk of failure, however the data has a backup and I'm not planning to use these drives for long. So buying a new drive would be a waste of money