It has been a while since anyone has replied. Simply ask a new question if you would like to start the discussion again.
Highlighted
Robin_Edinburgh
New member
5 4 0 0
Message 1 of 3
1,671
Flag Post

I'm considering upgrading my Pavilion 24-r101na  with an NVME SSD, but am uncertain about compatibility.

Thanks for any help you can give.

As an upgrade/custom enthusiast I personally love the idea of upgrading the device as well.

However, HP recommends that you go easy on it as the device is equipped with parts that perform at its optimal performance and also, the upgradeable parts listed above are purely for your ease, though the decision to upgrade will be at your own discretion

Socket 1 is being used for SSD

Socket 3 is being used for wireless LAN

Keep me posted, how it goes!

If the information I've provided was helpful, give us some reinforcement by clicking the Accepted Solution and Kudos buttons, that'll help us and others see that we've got the answers!

Thank you for joining the HP Community.

Having just bought and fitted a Sabrent Rocket Q 1TB NVMe PCIe M.2 2280 Solid State Drive (SB-RKTQ-1TB) to this system, I can confirm that the motherboard is capable of taking an NVMe SSD!  Just remember to buy the small fixing screw, as there isn't one fitted to the motherboard and I didn't get one with the NVMe drive.

An excellent instructional video can be found here.  Note, don't bother removing the internal stand bracket, you don't need to.

I left the original HDD in place, I'll use it as a backup drive, which can be done occasionally overnight.  I downloaded the Windows 10 tool to install a fresh copy of Windows 10 onto the new drive via a USB pen drive, rather than clone the old one.  It took a bit of fiddling about in BIOS to change the boot device and an error relating to the NVMe drive having an MBT partition table rather than GPT, but this was easily resolved by following the instruction on Microsoft's website here.

The difference in performance is absolutely staggering! From pressing the power button to login is 15seconds, I can have my pin entered and have chrome up and running (with multiple tabs) within another 5 seconds.  No 100% disk occupation for 2mins after login, no frustrating waiting, no lags.  And this was without even upgrading the RAM from 8GB to 16GB, something I actually don't feel is necessary now that I have the NVMe drive installed.

It's taken this All-in-One from an attractive looking system that seriously underwhelmed in terms of performance and transformed it into a system that's every bit as swift as the high-end CAD machine that I use at work. 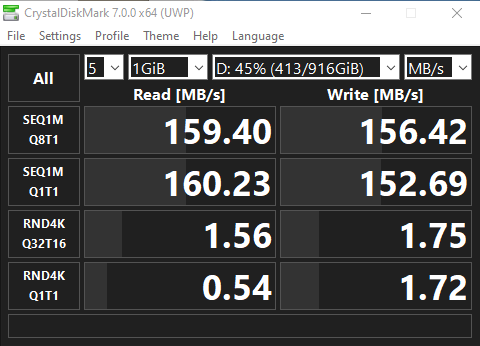 Performance with the NVMe Drive: 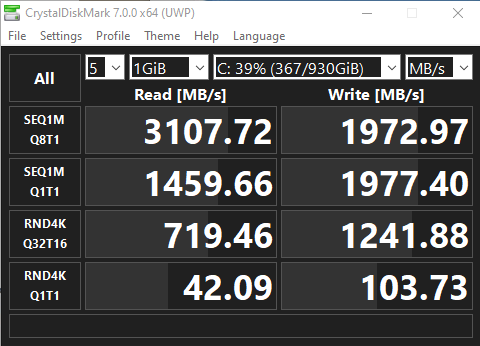 The stats speak for themselves.

I simply don't understand why HP cheap out on mechanical HDDs on systems in this day and age.

@Raj1788 the device is certainly NOT equipped with parts that perform at their optimal performance - HDDs are legacy and have no place in PCs in 2019.