We are using an old Pavilion p6234f tower as a Windows Media Center computer to record cable TV programming.

A couple of weeks ago, the computer started turning itself off spontaneously. Then it got to the point where I could turn it on, but it would not POST. Troubleshooting and research on the Internet suggested that the leading candidates for the source of the problem were the CMOS battery, the power supply unit, and the motherboard itself.

This week I replaced all of these (and also reset the CMOS), and the computer is no better off than before. Last night after completing the surgery, when hitting the power switch this would light up and the fans (CPU fan and case fan) would start spinning, but after a few seconds the case fan would stop spinning while the CPU fan kept running. It never reached the POST stage and there are no beeps.

Today, the power switch isn't even lighting up when I press it. So I'm wondering if it could have been the power switch all along. Trouble is, I don't see any way to get at the back of the switch to inspect or replace the switch or the little cable leading up to it. It's hidden behind the DVD cage and there is no obvious way to disassemble that (no screws, latches, etc.) so that I can get at the power switch.

Anybody have suggestions as to how to access the power switch on the Pavilion p6234f? it looks like the Maintenance and Service Manual is no longer available at HP.com. I'm not the handiest person in the world, so detailed instructions will be very useful. I've watched several videos on YouTube and their examples don't apply to our PC, nor do i have any idea what they are doing (there's little "play-by-play" as they do their thing).

>  the leading candidates for the source of the problem were the CMOS battery, the power supply unit, and the motherboard itself. This week I replaced all of these ... and the computer is no better off than before.

Try disconnecting the wires from the power-switch from the motherboard, after noting which two pins on the motherboard that usually connect those wires. Then, use the tip of a screwdriver to very briefly "bridge" a connection between those two pins, to simulate a "push" of the power-button that would turn the computer on. If you get the same symptoms, then the power-button is not the cause of your problem.

Thanks very much. By carefully shining a flashlight into the corner of the PC case where the power switch is located, I managed to see that there's a multicolored cable (actually, several thin intertwined cables) leading away from the power switch. Then I followed it to where it plugs into the motherboard. Below is a photo (from the original mobo) of the pins that these cables connect to. They are along the left edge as we're looking at the picture, in the white type and mustard background, and labeled "HDLED" and "RESET". 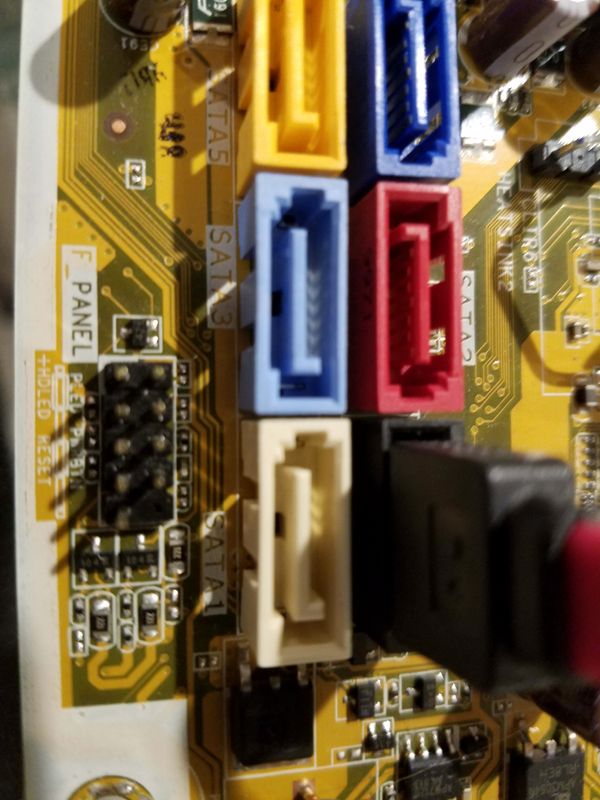 Notice that there's a total of 7 pins involved here. The four at the top end would seem to have to do with the HDLED, and the other three with RESET. In neither case is it two pins that I'd be trying to bridge. Which ones of these pins should I try to bridge with the screwdriver?

It is too bad that the "shadow" of the pins obscures the labels.

PLED --> Light Emitting Diode when the computer is powered-on.

HDLED --> Light Emitting Diode when the disk-drive is active.

For some historical reason, only pins #1 and #3 for the speaker-wires are used.

Do the "short" across the 2 "power" pins.  When the motherboard is powered-off, "shorting" the WRONG pins will have no effect, and will not cause any harm.

Thank you for the rundown on the wires, I learned something tonight!

OK, I tried bridging the two power pins. It looks like they're the two rightmost pins on the top row.

Nothing happened, at least nothing that I could notice.

It looks like I'm running out of possible causes for what's going on? Already tried the CMOS battery, the PSU, the mobo, and now the power switch. What's left to try?

This week I replaced all of these (and also reset the CMOS), and the computer is no better off than before. Last night after completing the surgery, when hitting the power switch this would light up and the fans (CPU fan and case fan) would start spinning, but after a few seconds the case fan would stop spinning while the CPU fan kept running. It never reached the POST stage and there are no beeps.

I think youre barking up the wrong tree.

I am shocked you replaced all of them.

Do you happen to have a video card installed? your current symptoms describe a dead video card ( fan tuning with nothing else working.

To be sure, I didn't start replacing parts willy-nilly, but only after visiting numerous technical forums where symptoms similar to what our PC was experiencing were described.

I've tried plugging the PC into different outlets; using a different power cord; booting up with no peripherals or components connected, or even any RAM installed: none of this has helped. It simply won't come on any more. There was a video card installed, but removing it made no difference. That video card is now happily humming along inside a different PC.

And remember, the problem PC had worked for many years before and the troubles started before I disconnected any parts, so it couldn't be an issue of something being inadequately plugged in or plugged into the wrong place. Also, the computer has now been turned off and disconnected from the electrical outlet for two weeks (except when trying to test it), so I'm not sure how the failure to POST coud have to do with an overheating component.

I'm open to suggestions as to what else in a PC could cause it to stop POSTing, or like now to not even power up at all.

If youve already followed the steps in my previos post, (i,e taking it all apart and putting it back together without any thing such as HDD or a video card.) then Id say this point to the CPU being bad( Or not installed correctly ).

Huh, maybe it's the CPU then, since the PC started doing these things while the CPU was sitting in the original motherboard from HP's factory.

I have to admit that, when researching the problem, the leading candidates (the ones given as the most likely cause) were the ones listed above. Don't remember coming across any mention of the CPU as a possibility, but it does make sense.

Considering that we're trying to save a Windows Media Center system (translation: a Windows 10 machine won't do), this means one more trip to eBay for a replacement CPU.

My thanks to you and to @Itsmyname for the ideas and the info. 👍

This compares to the windshield in my nephew's automobile.

It started as a rock-chip, and then it turned into a small crack, and then into a larger crack, and now the crack extends across the whole windshield.

So, what started-out for you as an "occasional" problem became an "intermittent" problem, and now it is an "ongoing" problem.   The only question is which component (or its replacement) is causing the problem.