Hi, I recently purchased a  OMEN 25L Desktop - GT12-0235se, and it arrived about 3 days ago. I've been using it since then. The issue I encountered is pretty much the same as what's described in the link below:

Except that I'm certain the the irregular clicking noise is coming from the fan attached to the power supply unit when the fan starts spinning. The fan would usually starts for a second and stops under the quiet mode (set through the Omen Gaming Hub) and, and such behavior becomes more frequent when using the turbo mode. It's more common to occur when the pc is doing some lightweight tasks (e.g. browsing webpages, just like the link above described) or is at idle.

I'm not sure if it's just the fan control mechanism and the poor quality of the psu that's causing this or if it's indeed a malfunction in the psu fan, so I'm hesitating to decide if asking for a replacement or shipping it back for repair can actually fix the issue. 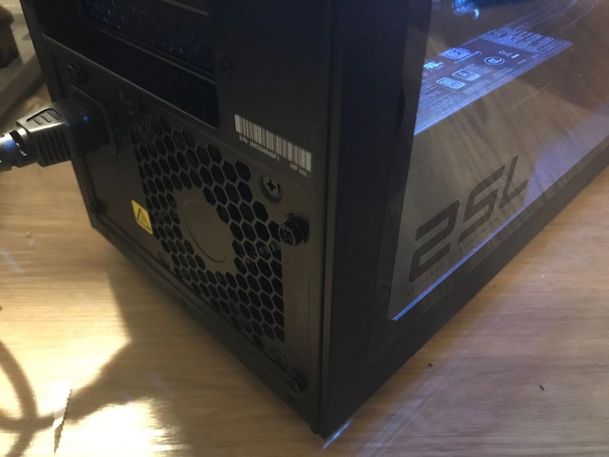 I ended up getting mine exchanged at my local Currys (it took just over a month to get my new one).

Did the clicks vanish on my new OMEN? No.

I joined a discord server with other Omen users & a lot of the 25L owners said that they too encountered the PSU fan ‘clicks’.
It turns out that the PSU fans that come with these 25L Omens are just naturally noisy unfortunately. These ‘clicks’ have had no impact on their pc performance, just a noisy nuisance. In some cases, some owners say the clicks eventually stopped.

If I were you, I’d call to get it replaced just to give yourself a peace of mind. But be warned, I’m 90% sure you’ll still hear the ‘clicks’ but like I said, it seems to harmless & just a noisy part of an otherwise great pre-built pc.

I suggest you join the HP Omen discord I’m on https://discord.gg/rUYT5GTn

If you have any other questions don’t hesitate to ask!

Thanks for your reply! Yes, I was initially suspecting that the noise may just be caused by the poor quality of the psu fan instead of some real malfunction. I would definitely contact the HP support to see if I can get an exchange. I bought it online, so it might be more of a hassle for me to deal with all the shipping and stuffs. I agree that the noise doesn't seem to have any impact on the performance. It was just very annoying to me since it's kind of a noticeable and irregular noise unlike normal fan spinning noise. All other parts functioned pretty well.

Hi, I just contacted the support team, and they said I also have the option to pay extra to upgrade the 25L to e.g. a 30L. I'm ok with the 30L's price, it's just that it seems to be out of stock. Do you know if this fan noise issue is common for 30L as well?

Hmm unfortunately I couldn’t tell you man as I’m not too familiar with the 30L. But if you’re okay with the price for it then upgrade away!

No problem. Thanks for your help!