It has been a while since anyone has replied. Simply ask a new question if you would like to start the discussion again.
LewLasher
Level 1
10 9 0 1
Message 11 of 21
2,108
Flag Post

You certainly do not need to say that you are sorry!  I am very grateful for your ideas.

Meanwhile, I have now had enough opportunities to look inside the case of the HP EliteDesk 800 G1 SFF that it now appears that there is, in fact, room for an SATA SDD under the thin DVD drive.  I don't know what's involved in that installation, and, ironically, it was only because I did not notice that there was room there, that I decided to try the (faster) NVMe SSD!

I am sorry we couldnt make it work somehow...I also read about many compatibility issues with new hardware when trying to combine with older hardware...its probably that a new BIOS version would be required to make it compatible...but nobody is gonna make a new version for it.

the same as your SFF version.  I had a 256GB Samsung XP941 SSD which I attempted to install

I installed the adapter with the M.2 SSD into the white PCI express x 16 downshifted to an x4.

The EliteDesk not only recognized the SSD it decided to boot off it. I had previously used this

up using Windows 7 (not what I expected or wanted). After verifying that I could access the

the original configuration with the installed Windows 10 running off the Hatachi 2 TB drive.

By the way if you do a search on the Vantec M.2 reference you posted the first hit is for Vantec's

M2PC200 board which has two M.2 positions (both PCIEX4 and SATA). I believe LewLasher has

I believe I need use the bios to force booting on the hard disk with windows 10, and then attempt

a system migration to the  PCI/SSD. If that doesn't work it would still be nice to be able to use

the faster SSD as a 2nd drive.

I am replying to the post from RobMc1.  From what little I can tell about the Samsung XP941 SSD, it appears to be neither SATA nor NVMe, but just native PCIe.

I am still puzzled by what it means for Windows 10 to "support" NVMe, and then what would be the specific additional missing factor(s) that would be needed for my PC to work with NVMe.

Nonetheless, I ended getting an SATA SSD (the Samsung 860 EVO, which seems to be well regarded), and that seems to be working fine.  I am not booting off it, so the performance advantage is most noticeable in particular applications, such as the Audacity audio-editing program, which does intensive operations on large files.

The HP elite has SATA 3.0 and a PCIe X4 interface capable of interfacing to a SSD or hard disk.

The PCIe (inhanced) is a faster version which intel didn't support until the Z97 chipsets in 2014. Intel

says "PCIe* NVMe*-based SSDs require specific hardware, BIOS and driver support to be used as a boot device." and as I have found out the Elite desk has the Q87 chipset which doesn't allow booting

from the NVMe SSDs.

I was trying to migrate the windows system to it which I haven't been able to accomplish.

You are say you are considering a Samsung 860 EVO which will give you a dramatic boost over any mechanical drive. The 860 is available either as a SATA 3 or a M.2 SATA. The SATA 3 is compatible with the HP elite and will plug right in. The 860 reads at 550 MB/s which is very close to the max SATA 3 spec.

but about 1/4 the speed of a PCIe X4 drive but for the price a very good choice especially since you will be able to boot from it.

Actually, returning the SSD is a good plan.

I see you missed this bit in the specifications for the Adapter.

The Inland Premium 512GB 3D NAND M.2 2280 PCIe NVMe 3.0 x4 SSD that you chose to use is an M keyed SSD and that means it is supposed to be compatible with the adapter.

Replying to RobMc1, who said that he found that "the Elite desk has the Q87 chipset which doesn't allow booting

from the NVMe SSDs".

Would this still allow installing an NVMe SSD for storage, without booting from it?

Replaying to Erico, who said "The Inland Premium 512GB 3D NAND M.2 2280 PCIe NVMe 3.0 x4 SSD that you chose to use is a B keyed SSD and that means it is not compatible with the adapter. "

I think you may be on to something with the B key versues M key issue.  But how did you know that this particular SSD is B keyed?  I can't find anything in the product description on Amazon or MicroCenter (where I bought it, because of the ease of returning it).

Incidentally, when you said "you missed this bit in the specifications for the Adapter", you quote from the specifications for the Mailiya adapter that RobMc1 bought.  The adapter that I tried to use was Vantac, not Mailiya.  Nonetheless, it appears that the Vantec adapter probably had a similar restriction.  The Vantec specs say: "Primary M.2 Type: NVMe or AHCI SSD using M Key only, Secondary M.2 Type: SATA SSD using B Key, Available system board PCIe x4 or x8 or x16 slot", so a NVMe SSD adapter using B key would not work.  But, again, how did you know that the particular Inland SSD uses  B key?  I accidentally clicked on the Amazon listing for a similar Inland SSD, which uses PCIe gen 3 x 2, and therefore is considerably slower.  The Amazon listing doesn't say anything about B key or M key, but a customer review claims it can use either.

I took a look at the image of the SSD.

This is a correction to what I stated. 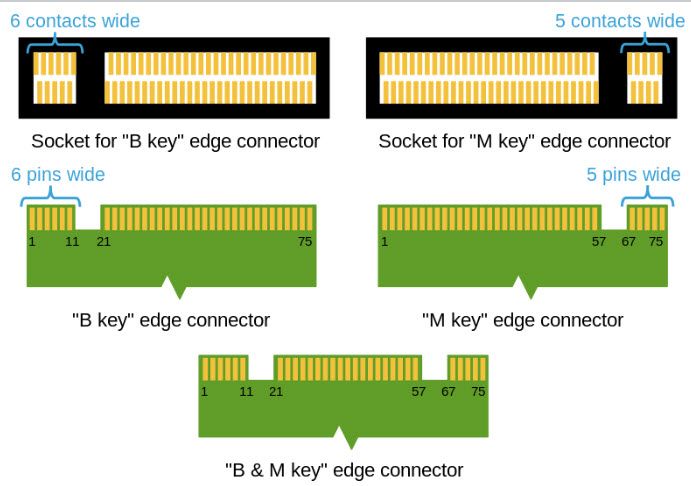 You can use the @ symbol and in the dropdown that appears, choose an individual member you wish to reply to.

Unfortunately, I did not quite ascertain from the pictures which cards were M-keyed.  It seemed that the distinguishing feature was that the "gap" was nearer to the left side of the connector.  And this also seemed true in the picture of the Inland SSD.

However, this is all beside the point.  Important compatibility information should be clearly stated on the product packaging and in the technical specifications.  No one should have to figure this out by looking at a photograph of the product.

Nonetheless, I have learned that it is important to know whether an SSD is M-keyed.  When, in the future, I am in the market for an SSD, or I am helping someone else, I will make sure to get this information.

Just out of curiosity, how about the Samsung 970 EVO Plus?  Is it M-keyed?

In electronics, slots have always been "keyed" for fit and designation. It is easy to miss that or mix them up. I have done myself that in this case and stated something in error.  I am like most people and not perfect.