BSOD only when gaming

I have a 3-month old Pavilion desktop (Ryzen 7, GeForce 1660 Super, 16 GB memory). For the first 3 months, no problems with it whatsoever. Suddenly last Friday (Jul 3rd), it started BSOD'ing only when I played a game. I did not install any new SW or HW before this started. I'm not sure now if any WUs were installed (I've reinstalled Windows). I've browsed, watched videos and movies for hours, no BSOD. I fire up any game (via Steam), and within 20-30m, BSOD. Latest message: CRITICAL_PROCESS_DIED.

I opened a case with HP, but they have been zero help. First tech tried to immediately get me to pay for some 2nd-level support before even attempting to troubleshoot. Second tech tried to get me to buy some $70 recovery media, and then wants me to send the system back. Their whole tech support seems like a scam. I figured I'd try here before giving up.

1. Reinstalled OS, clean (did not save any files)

3. Updated all HP software to latest

6. Ran all fast and extensive HP tests - all passed

7. Installed HWInfo64 and WhoCrashed, to try to get some idea of what is causing this, but the system refuses to write a dump file. I've left the BSOD for an hour and it's just stuck at 0%. I see this in Event Viewer: "Dump file creation failed due to error during dump creation."

8. Lowered video settings, in multiple games - made no difference

9. Checked Device Manager for any driver issues - none

I don't see anything helpful in Event Viewer around the crash times either. Only error is "previous shutdown was unexpected".

Things I've thought about but haven't tried yet:

One other thing -  I hear a fan running randomly with this system, even sometimes when I'm not even using it. I never recall this with my previous HP desktop. Only time I would ever hear a fan is if I was playing some graphically-intensive game. I've checked the temps via Omen CC, and it's never shown the CPU or GPU as orange or red, even when I'm playing a game.

I'm pretty convinced it's a HW issue, most likely the video card. But figured I'd check here to see if anyone else has any ideas before I send this back. Thanks.

Just updating my own post in case anyone else comes across it...it looks like this idiotic bug was the cause of my issues: https://h30434.www3.hp.com/t5/Desktop-Operating-Systems-and-Recovery/Controlling-the-lighting-in-OME.... Turning off the light was also turning off the system fan. Unreal. Updating to BIOS F.23 seems to have resolved the issue.

Two complete system restores, and hours and hours troubleshooting this. Neither HP support person knew about this issue. What a waste.

I would say you have tried many if not all "General Troubleshooting Tips" recommended by Microsoft at this (Link). You can use this site to investigate many types of Blue Screen error conditions.

Have to tried running Prime95 to test the CPU and RAM or Unigine Heaven to test the graphics card while using HWinfo64 portable during both tests to monitor temps and check stability? This could eliminate possible Steam or Network issues.

It seems to be some type of hardware problem since you see this error when using a clean Windows installation. But it could also be a system driver problem. The cause could also be a component down to a flaky motherboard. Try only a keyboard. mouse, and monitor when running the local tests.

This type of error is very tough to pinpoint.

Thanks for replying, and for the suggestions. I just tried a Prime95 "Blend" torture test. I'm not familiar with CPU/memory stress tests, but as soon as it started HWinfo64 showed the CPU at 95+° C. From what I'm reading online, this is extremely high, correct? Oddly, I also had Omen CC opened and it was only showing ~ 30° C. I took screenshots of HWinfo64 pre-test and post-test. Pre-test CPU temp avg was 65°, post-test, 79°. That was from running it for just 10 minutes. From what I'm reading online, most suggestions are to run Prime95 for 12-24 hours, but I'm concerned my CPU temps are already too high? Am I off? I'll attach the HWinfo64 post-test screenshot. 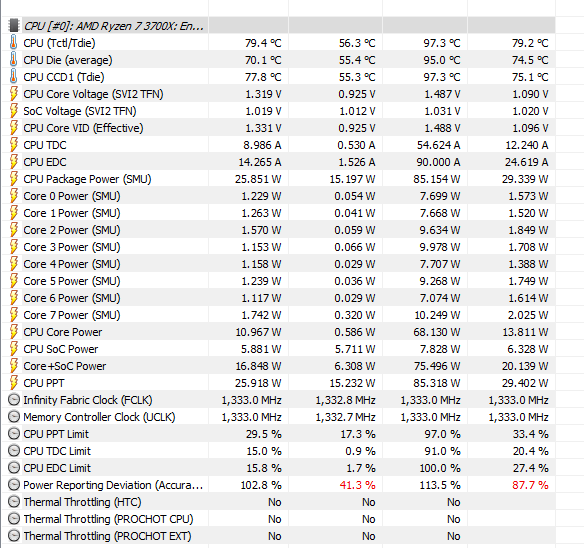 I also just tried the Unigine Heaven test (with the default settings) and after 5 minutes the system BSOD'd, with UNEXPECTED_STORE_EXCEPTION. I never saw the temp go above 83° C. Do you think this indicates an issue with the video card? Should I re-run the Unigine test to see if it crashes it again?

I've suspected the video card since this started happening, based on 1) only happens when gaming, 2) the video card fan randomly running, even when I'm not using the system. I've never owned a PC where a fan just randomly starts running even when the system is barely being used, or idle. Tells me something is not right.

It looks like you have a possible CPU thermal issue and a possible issue with the graphics card; the graphics card issue could be a thermal  problem or a faulty component problem. You should be able to loop the Heaven test indefinitely with no issues.

You should be able to run Prime95 for 20 or 30 minutes, or indefinitely, and see CPU temps in the 70+ or low 80 degree area if the system is capable of producing thermal equilibrium . You have potential problems with both components which may be related to thermals. Chassis air flow can contribute to this condition.

You should request HP factory service since your PC is three months old and, I would think, you are in warranty.

Just updating my own post in case anyone else comes across it...it looks like this idiotic bug was the cause of my issues: https://h30434.www3.hp.com/t5/Desktop-Operating-Systems-and-Recovery/Controlling-the-lighting-in-OME.... Turning off the light was also turning off the system fan. Unreal. Updating to BIOS F.23 seems to have resolved the issue.

Two complete system restores, and hours and hours troubleshooting this. Neither HP support person knew about this issue. What a waste.