The client I'm working for has purchased some new HP705 G3 SFF, I'm working with SCCM 2012 to import drivers ect. to get them to work on customer image and domain

When install is complete, I see this message. It's in Danish, but it says Hardware is not supported 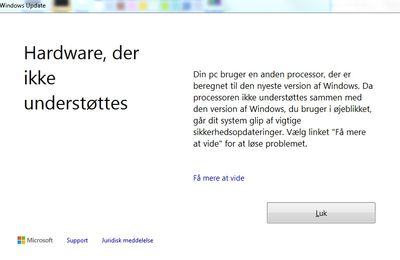 But as I see it, from my screenshot it looks like a Generation 6 processor?

> The message is triggered once the April 2017 Cumulative Update is installed, and will appear each time a new update scan happens through Windows Update or Windows Server Update Services (WSUS).

> We do plan to address this issue in a future update.

Yesterday was the "second Tuesday" of the month (June 2017) -- the scheduled day each month that Microsoft releases security-updates for Windows and Office.

Microsoft released the "June 2017 Cumulative Roll-up Update" for Windows 7 (and presumably 8 and 10) to fully address the reported issue.