I guess you can give it a try.

If the PC's have similar processors and chipsets it might work.

Did you try to install W10 as I suggested?

Yes. However, that poses another problem. Every time I attempt loading media through a USB port, it errors, stating "An operating system wasn't found. Try disconnecting any drives that don't contain an OS. Press any key to restart."

No matter what I've tried—even reordering the boot sequence to accommodate the flash drive to the first position—it doesn't seem to be recognizing the contents of said drive, and/or seeing the drive itself. When I first started this rejuvenation project, out of curiosity, I originally tried loading ChaletOS/Linux as a vetted, viable Windows alternative in that manner. But, again; I was confronted by the same issue of it not recognizing the contents or seeing the drive, with that error message.

I would burn it to disc, beings that it doesn't seem to have a problem seeing my optical drive. But, at the moment I don't have a blank with enough space available.

When you try to boot from the flash drive, have it plugged into the PC's USB port.

Turn on the PC and immediately start tapping the F9 key to get the boot options menu.

Select the USB flash drive from the list and press the Enter key.

See if the PC will boot from the flash drive that way.

Paul; you are a saint for sticking with me on this! If you're not one, you should be canonized! 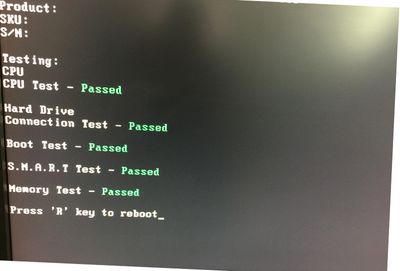 PS: ...that was what I got after F9. Perhaps another F number prompt?

PSS: In so far as a response to your first reply today—about the processor and chipset being similar—both PCs are HP Pavilions. The newer one I'm presently using was purchased brand new, last year. HP Pavilion 595-p0074

Escape key got me to the option screen. But, still no luck. I received the same error.

That is very strange.

F9 should get you a boot options menu.

I cannot for the life of me, understand why this is happening.

The new PC you have has an Intel processor and chipset, but it is so far advanced beyond the old one you have, it may not work.

I suggest you run to the local Wal-Mart or someplace and get a pack of DVD-R's.  See if you can install W10 from a DVD, since you know the PC will boot from the DVD drive.

I burn the W10 ISO files to DVD"s using the free CD Burner XP software and never had an issue installing Windows with a DVD.

I have had issues with USB flash drives in the past.

I know F9 should have worked, but on a whim I tried esc, and it got me to the same place. This system's haunted!

I haven't set foot in a Wal-Mart for decades, haha. But, I will head on down to some other corporate-owned trap for the DVDs. And, I still may try the load-in-via-external-from-PC-to-PC way, just for the hell of it.

It is a puzzler; isn't it? I've never had this much trouble, and I worked at IBM for years in manufacturing!

Paul, you have been amazing! Thanks!

I had the same issue a long time ago with an old HP-Compaq d510 business class PC.

It would not under any circumstance, boot from the DVD drive, or a USB port.

I had to resort to loading the OS on a slightly newer d530 and pop the hard drive back in to the d510.

Worked like a champ.  The DVD drive worked fine for all other purposes but booting from it.

Okay; the USB/Windows Media Creation Tool boot finally worked (I guess the 100th time was the charm?) However, it is still stalling; mid-halfway spin of the spinning "dots." I feel just like a child describing things in that way; but I'm sure you understand where I mean. My assumption is It's probably freezing at the same core driver load-in spot as described in my first message.