Since the new year, I've had nothing but issues with HPSA. I was originally running version 8 that came with my laptop. But I started getting notifications that couldn't be marked as read. Then I had a red notification from within the app asking me to upgrade to a newer version. This would be version 9.

I then started getting similar issues with this newer version. I kept getting a notification saying my firewall was not setup (which it was) every few days. Everytime I marked the notification as 'read', it would come back a few days later. So yesterday, I decided to uninstall and re-install version 8.

Now after the program has installed, I either get the red notification asking me to upgrade to version 9 or I push it through manually by clicking the 'about' tab then clicking 'update to newer version'. When I do this, the update process begins but when it finishes, there's no actual program that's been installed. All that's there is a blank shortcut on the desktop. When I click on it, it says "You'll need a new app to open this hpsupportassistant" Look for an app in Windows Store.

When I go to C:\SWSetup to look at the install files where all HP software installs from, I click on installHPSA.exe and I get an error message saying 'HP Support Assistant was not installed successfully. An error occurred during the installation: 183".

In the end, I have to go to the HP Support Assistant site again and re-download version 8 and stick with that as version 9 is obviously no longer installing. I;ve performed all of the abover steps about 10 times prior to posting this. And yes, I've done a clean-up and restart after uninstalling to make sure I've got rid of any excess files.

So I want to know:

1) Why are some of us getting these random notifications that can't be marked as 'read' on both versions of 8 and 9?

2) Why is version 9 no longer installing despite being prompted to upgrade?

3) Why does the webpage dashboard not load up on Chrome browsers? But when the dashboard does open on Firefox it says I've got messages but when I click on them it leads me to  broken webpages?

It seem that the whole HP Support Assistant experience (both apps and webpage) are not working as they should recently. What's going on?

Anybody from HP here?? lol

exactly the same issue by me.. HP Pavilion 15-CS and no idea to solve this problem.

3. You may experience these issues when the HP Support Assistant servers are not working which should be up and running soon.

Re-try after some time.

Also, check if you have any pending Windows updates on you PC.

Select the Start button, and then go to Settings > Update & Security > Windows Update, and select Check for updates.

Let me know how this goes.

If you feel my post solved your issue, please click “Accept as Solution”, it will help others find the solution. Click the “Kudos/Thumbs Up" on the bottom right to say “Thanks” for helping!

no chance.. also attempting to reinstall version 9.4.105.0 after uninstalling the previous version ends in ERROR 183 and the remaining description of DR-Soong0101

Having installed version 9.x manually few weeks / couple of months ago, HPSA reverted back to v8.x on its own immediately after the update has completed. HPSA v8.x on my PC has even updated itself last week or so - but still remaining on v8.x.

The conclusion based on that I have is that older PCs & laptops will not be supported by HPSA v9.x.

First of all thank you for getting back to me. It's only been 3 months since I first posted this issue.  I think that's more than enough time to give the HPSA servers to be back up and running don't you think? 🙂

Yes, the issue is still persisting. But now, every week or so I get a notification saying to install a WLAN driver which has already been installed despite me deleting the notification every time. I all still have a big red notification in the top right of the page  saying a newer version of HPSA is available but I don't dare install it due to all the problems I had previously.

As for your 'suggestion', I run Windows Update once or twice a day for the latest virus definitions and my HPSA notification settings are set to 'Notify me but don't install'.

I'm not the type of person to complain for complaining's sake but I have to admit thus far HP support is terrible! 3 months for a reply and when that reply eventually does come, it's not even a soluttion but more of a lazy attempt at wasting time or stabbing in the dark.

The issue is with HP Support Assistant! Be it asking people to install drivers that are already installed or asking us to upgrade to a version that isn't compatible. Considering this software is bundled with all new HP computers and is considered important to maintaining health, can I suggest that HP and it's engineers pull their fingers out and fix this piece of software as soon as possible please?

omen 15  dc0032np here  version 8.7.50.3 works with the issues mentioned (says i have an update that is already installed.in my case the wlan)

That's how it pans out on my PC: 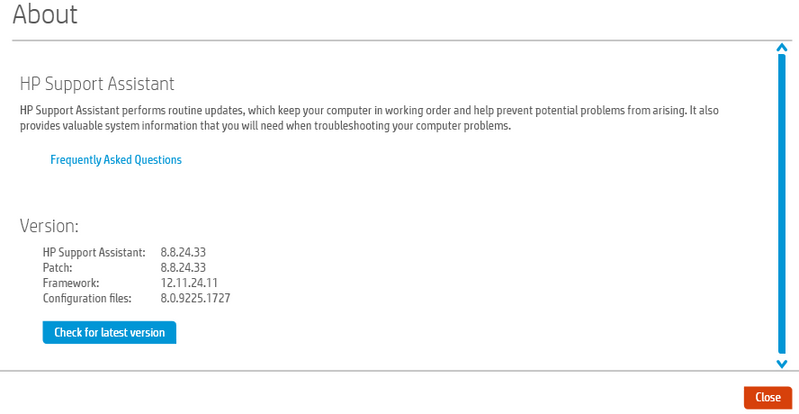