I have a series of questions about the possible video-out configurations of my Curved All-in-One 34-b135se computer:
1. The machine has an Integrated GPU on its Intel CPU, and an NVidia GTX discrete GPU..It has one HDMI-out port and one USB-C Thunderbolt 3 port.  Question:  Is each of the two video-out ports driven by on a specific one of the two GPUs,  or can both  GPUs drive both monitors.. If the former, what is the actual mapping: is it that the integrated GPU drives the HDMI port, and the NVidia card drives the Thunderbolt port? Or the opposite.

2. That USB Type-C port is specified to he USB 3.1 Gen 1 or Thunderbolt 3.. But these two are different things. How does one switch the configuration between them?  I did not see a BIOS setting to do this. Perhaps it happens automagically.

3, I would like to use an adapter which goes from THE USB Type-c  Thunderbolt port and gives video-out connections to TWO ( Dual)  DisplayPort  4K-montors. But in order for them to work, I am told that i must make certain that the Thunderbolt port supports two lanes of  Display Port. Can anyone tell me if it does? Can I drive two displayport monitors using only the USB type-C thunderbolt output (and and a USB type-c thurnderbolt-3-to-Dual 4K displayport, Or will i only ever get one DisplayPort monitor attached to the machine, unless I use a docking station  or some other, active adapter.

@sbpetrack
Thank you for posting on the HP Support Community.

After reading your post, I did go through the Product specifications of your product and found that you have Canard motherboard installed on the PC.

See the below configuration: 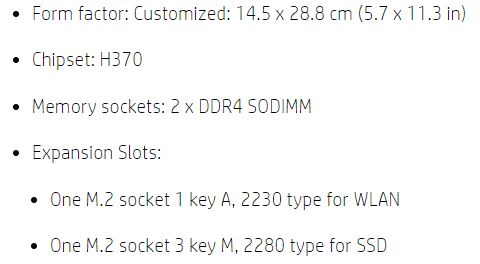 NOTE: HP does not recommend upgrading or downgrading hardware parts or software that is bundled with the product as It may affect the manufacturer's warranty and performance, however, you could change the configuration at your own discretion.