I need to get into the BIOS on my Pavilion P6520Y Desktop. I have tried every key mentioned - F2, F10, F12, Esc, Enter, CTRL F - and NONE of them take me into BIOS. All of them are ignored because  my keyboard is USB and USB isn't recognized until WINDOWS is running (way past BIOS).

I've even tried using an old PS2 keyboard with a USB adapter  and get the same non-result. My computer only has USB ports. I've plugged my keyboard into every possible USB port on the CPU. It makes no difference.

I can't believe this computer was built so that it's impossible to get into BIOS. What am I missing?

Since my pc was screwed up with Windows 10, and I've since restored it to Factory configuration using the original disks, I get Blue Screens when I try to use anything that's graphic intensive. This did NOT happen before Win10. I NEVER got bluescreens. I've updated my graphics driver and scanned my computer for any disfunctional devices. Nothing comes up as a problem. My only hope is to find out what was changed in BIOS, but I can't find a way to get into it.

Does anyone have a suggestion not already given on every other forum?  How can I used my keyboard to get into BIOS if my keyboard isn't "alive" until Windows starts?

I appreciate anyone with the magic solution. 🙂

orginal disk? form whom and how? ,  those match your model exactly from HP,  it must....

and you forgot to say  it VISA DISKS right?

my guess is that key is dead too.  using PS2 or USB keyboards.

so is the screen dead booting, seems not, in fact the BIOS even tells you what key to press , to get to BIOS.

if the coin cell when dead (BIOS CMOS RAM battery ) then it may go to some crazy mode.

The BIOS must work and the keyboard USB or PS2 must work. or the bios is unhinged, or coil cell is bad.

its like $3 part, and is not windows related. at all.

My guess so far is,  w10 is not supported on this hardware.

this PC came with only VISTA, and HP does not support W10,  on this PC.  if you read the software support page it tells you that fact.

the PC is 6 years old, not tool old but is old in dog years,  Vista is a dog.

lots of cute internation posters sure. but BIOS manual , nada, (im sure they have one, its just not indexed where it belongs)

if it was , id have read it and posted how to use BIOS> (im well versed in it but not all the deviations, and derivates)

those white words in text as it power on, must show it.

if not its, not even loading bios rom. code.

the old BIOS has a bit (one) to flip in most bios.  made then

if off , the keyboard USB will be dead in BIOS>

but that does NOT turn off , the PS2 KBD. ever.  that is always alive. if good.

obviously that USB trick is a checken and egg PAIN,  i keep and old PS2 keyboard, in my attick just in case this happes to this day.

use the PS2 keyboard and you only have 1 to 3 seconds to get the keys to work.

power on, and click the Esc key over and over,

in all cases it prompts you.

if not , then someone went in to BIOS and turned off the dang prompts (some you can, and is bad news)

if the coil cell is bad , it can go very nuts.  (memory scrambles but in most cases it beeps for fashes, PS2 key LED with codes, telling you CMOS corrupted. (nvram, cmos, mem) (battery DEAD)

Try to know that windows 10 does not support (MS laws) vast classes of HARWARE NOW.

chips no longer made are not supported.

companys that made them gone,same.

if the driver for a chip is not with a proper and new certificate ,  W10 Pukes.  and has newer more hard rules now. for this.

w10 is not easy to install on old PCs.  (unless super lucky)

there is  away to check before jump off this cliff but Ill not go there now.

Id get a new coin cell

and then read the words on the screen.  BIOS prompts and do what it tells you. in text there at time 1sec, from power on.

words off the HP site, reading the correct page,  not indexed, found the bugger

best is watch the screen , most PC tell you what key to mash. BIOS.

HP Recommended
I am on a Windows 7 machine, not Vista. I upgraded to Win10 for 4 months. It ran great and then it started crashing and uninstalled itself twice. I paid $24 to an archival software company for the factory disks specific to my pc (matching the serial numer). So I'm back to Win7. But now I get BSOD more and more as Windows installs updates that bypass my request to turn them off. Now I get a BSOD every few minutes even just reading in a browser.

So last night I reinstalled the factory software again (for the fifth time in the past year). This is ridiculous. I'm on the verge of saving up to switch to a MAC tho I don't like Apple. And I've tried all of ypur suggested keys. My start screen is fine - not black. I just want to get into BIOS before Windows runs but my keyboard isn't available until Windows runs. The keyboard works fine..in Windows.

It seems I have no way into BIOS.
Was this reply helpful? Yes No

HP Recommended
Also...as I said in my original post - I cannot use a PS2 keyboard. There are NO PS2 connections on my computer. Only USB, Firewire, Audio and Ethernet.
Was this reply helpful? Yes No

HP Recommended
Also...as I said in my original post - I cannot use a PS2 keyboard. There are NO PS2 connections on my computer. Only USB, Firewire, Audio and Ethernet.

Your BIOS procedure is the one everybody knows. I have done this with my older computers. As I said in my original post...NONE OF THAT WORKS. My keyboard isn't recognized by the computer until Windows is running. I press these keys til my fingers hurt and all that happens is Windows starts up.
Was this reply helpful? Yes No

try to know, i cant see this pc, see if its original nor see if it really is the pn, stated. model

Im totall blind here, DO KNOW IF I WAS there the MOBO numbers would land on my eyes in MINUTES !!!

is it really  BSOD with memory dump or one of 20 other W10 blue screens MS not uses.?  the words on all screens matter.

they have many generations of this pc.  vast.  if you look. (the first ones were PS2 fitted, but for sure NOT ALL.

is that CD , listed as and autohorized,  Cd vender on the HP site,  under how to get a media kit, need the link?

i mentioned PS2 for only one reason,  (the offical pages shows this)

there are over 3million transistors on that MOBO, so..... any thing in the real world here can happen.

I have no magic ever, I only know testing,  and diagnosis or at least subsitution,,

no ps2 here, sure, but see those, PCI slots on the right, not seen here, got a VGA card there? see 4 usb ports, all dead?

if I had this PC id see all this.. but cant.

do know that some BIOS you can turn off the BIOS USB access, to BIOS , "legacy mode off" and if turned off

the only way back is, reset the BIOS by pulling the coin cell and now USB hot key work, (luck happens)

The BIOS can also be fiddled wrong, IMO by going to , the configuration , page that says,"hide all BIOS PROMPTS"

yes seen it. and is a pain when seen or not seen in this case LOL. dead screens bios.

last a real BSOD not some other blue screesn 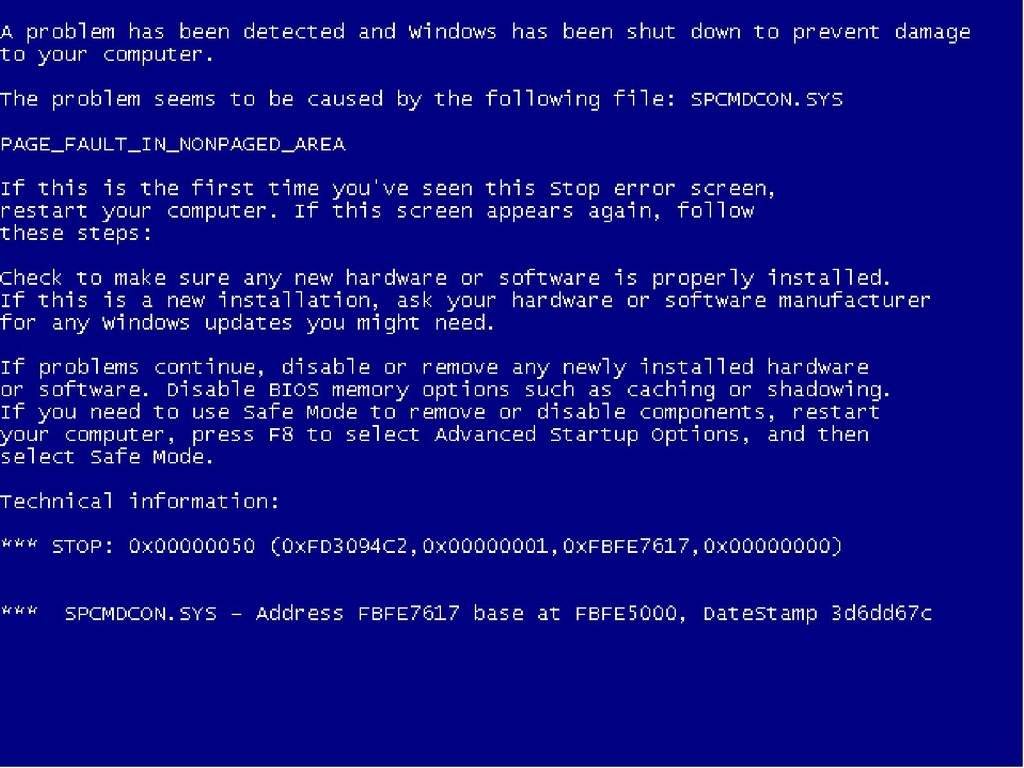 try BSOD have many causes. TRUE BSOD'S per above screen example.

there is no order only LUCK FATE AND WEAR;

its not your BIOS anyway

the BIOS boots the Drive 0, C:

so its not BIOS. but Id fix that first , yes,  I sure would and that old coil cell first.  3-5years is par there.

id get F11 working sure would , it will put back what was there DAY1.

read this fully yet

this is the only official HP way . real kits, if no kits sold for old PC call them and the will give you links to certified

true HP 3rd party CD sellers, or sticks,   certified by HP, not some crud of fleabay.