Hi having huge problems with this PC and posting this question as a last resort.

PC Crashed with a start up error on windows 10. Sadly we never created the USB recovery media so had to install a fresh OS.

Not too conerned because we had a full back up of the PC on the server which we though we could use to recover the PC.

However when using the USB client backup key to boot the PC cannot find the server on the network.

In the standard boot up the PC can ping the server plus is can connect to the internet. We have even tried using a USB to ethernet device thinking its the network card that has a problem.

Only thing i can think it is now is that we are missing two drivers on the device manager.

Through research everyone says it to do with the chipset drivers. So ihave used the intel driver update utility and installed all missing driviers. I have also installed HP chipset drivers from the HP website btru still nothing.

Has anyone got an idea of what i am doing wrong. I really think this PCI driver is my problem in ordet to do the full restore of the client backup.

You need this driver for those two devices...

Hi. I have an annoying problem with my low profile sapphire radeon hd 6670 which i bought yesterday. My pc is hp 8200 sff i5 2500. The thing is that the gpu is not recognized by the pc. When i open the device manager only intel hd graphics shows up, the amd is missing. I flashed the bios to the latest version available. Tried many things, but the problem persists. Any help would be appreciated. Thnx

It is considered to be "improper etiquette" to add your question to a year-old question, especially when the original question is quite different from your question.

>> I have an annoying problem with my low-profile sapphire radeon HD 6670 which i bought yesterday.

>> When i open the device manager only intel hd graphics shows up, the AMD is missing.

I assume that the AMD video-adapter is properly "seated" in a slot, and if it requires additional electric power, that you have connected a lead from the power-supply directly to the connector on the video-card.

Restart the computer, and enter BIOS SETUP, and check that the "video" is configured correctly, i.e., to "prefer" that the add-in (PCI or PCI-E) video-card is the "primary" display -- you do not want  for the onboard video to be listed as the "primary" display.  Then, "save-and-exit" from BIOS-setup mode, and quickly move the cable from the monitor to connect to the new video-card.  Sometimes, there is an option to "disable internal display adapter".

>> I flashed the BIOS to the latest version available.

Personally, I never try to "flash" the BIOS, especially as one of the first "trouble-shooting" steps, and then only if the documentation with the updated BIOS refers to a problem that I have encountered, e.g., some computers require a BIOS-update to run Windows 10.

But, since you've done it, it is "water under the bridge".

>> Tried many things, but the problem persists.

What have you tried?  It's a waste of time for anybody to "blindly" recommend something that you have already tried.

Yes, the gpu is 100% properly "seated". It does not require any additional electric power because it"s a low profile card.

When i enter the bios, there is no way that i can find primary and secondary displays cause it does not exist in any way, or if exists it"s just greyed out and is not possible to change.

> When i open the device manager only intel hd graphics shows up, the AMD is missing. 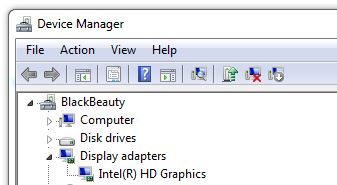 Are you seeing more than one "Display Adapter" when you expand that branch of the device-tree ?

Can you unscrew and remove the "spine" from the low-profile video-card, and insert just the video-card into a slot on a desktop PC, to see if Windows on that computer will "detect" the video-card?  It could be a "dud".

It works in any other pc i have been testing.

A bit weird, and this card of mine should have been working in my opinion, but i don"t know why it doesn"t.

> this card of mine should have been working, but i don't know why it doesn't.

What interface does the "working" video-card have?