I have a 6.5 yr old e9180t which the power supply died on me this weekend. The unit has an interesting history. The mother board was defective when I bought it and they had to finally replace it along with thousands of others. This unit coined the term inherently defective with google at the time. They rolled it our before really vetting it properly.

When I looked inside the box when I first got it I noticed how crammed the interior was compared to my previous unit.  This unit has always run HOT. After years of the heat build up I eventually just removed the side panel due to the heat.

So when the power supply died this weekend I discovered another big design problem with this unit. For the first time I removed the top plastic panel . . .  this panel completely hid and covered a vent for the power supply the whole time! The vent was completely covered with thick dust. I literally had to peel the dust off this area.

I always used air to blow the dust way inside but since there was no vent visible I had no idea about this issue and never saw the need to remove the top plastic cover.  So I plan to replace the power supply and have two questions.

1. First what is a good replacement? I see that EVGA makes these power supplys where both ends of the wires are plug in which seems like a perfect DIY approach. The current dead power supply was a Samsung 460watt HD642jj. I use two 27" hp monitors with this unit and work on graphics mostly during the day. I have i7 920 with a Radeon 4850 graphics card with 6   2GB DDR 3 = 12GB total memory along with a 640GB 7200rpm sata 3Gb/s hard drive.

2. Also will want to vent the top of the computer and need to actually put holes in the plastic cover to do so possibly or just forget the cover entirely? I think this was a very poor design feature since cleary Samsung designed the power supply to vent thru the top as well but HP never designed a vent for it with their cover??????? Since there isn't enough room to add another fan in this box from what I can see . . . is there any work arounds that folks have done to cool these hot crammed towers down besides removing the side panel?

I do not want to buy a new computer yet since I have an i7 already and the memory is sufficient and not really too out of date. I might want a bigger hard drive eventually.  For my needs it works fine. I tried migrating to Win 10 but it messes up so many things with my work and didn't see MS wanting to fix things much with it and back tracked to Win 7.

I use and like Microsoft Office 2013 and that works well with Win 7. Windows 10 makes a mess of the viewer and problems with PowerPoint and so many issues.

I think if I were to buy again I would have one built locally with more care with considerations to heat build up, no bloat ware, let me use Win 7, more usb slots in front for my wireless mouse and keyboard and other things I plug in from time to time, use all that wasted space for extra harddrive for another fan, more room so you can actually blast air to clean out around the processor, more vents on the side panels and above where the heat rises to. I spent a pretty penny and got many upgrades and I thought I was getting a well designed unit. I just don't think it was vetted and designed very well. I do see the return policy has improved since I bought. At the time I only had 17 days from the day I got it to test it out and return it back to them. Now they give 30 days which is a bit more reasonable.

After posting this I thought about the issue with the power supply and HP must have installed the power supply upside down and that is why this power supplied died and why this unit was always super hot. I just looked at the power supply and yep I think it was upside down. For years I have been plugging this in on the upper right hand side not the left hand side. The only person who has worked on this computer was the guy who was hired by HP to replace the motherboard after two months since the board was defective from the get go. I wonder if he had taken it out and put it back in wrong? I don't know since I thought HP and the guy knew what they were doing and I had no idea to keep a close eye on how the power supply should be. Unbelievable!

Power supplies have 4 mounting screws, and these screws only align "one-way". It is not possible to flip it 180 degrees and have those screws line-up.  About that EVGA, do you have a model #.  I know you said EVGA, but Corsair is another choice.  I have uploaded a pic of the Corsair CX600, and marked the screw holes. Look at pattern. 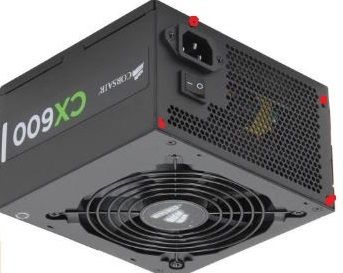 Sorry but you are wrong. I just put it in the correct way with the vents down not up like it was and the screw holes line up fine. The box frame has more than one set of holes to screw the power supply to. They line up both ways. When it is put in correctly the wires come out a hole near the back and this makes it more combursome to hook things up. My guess is who ever installed it felt it was obviously easier to get at the wires with it upside down and attach it to the different areas.

I just took these pictures one of the wrong way it was installed and how it was for 6.5 years by HP and as you can see they line up fine. Also what I noticed is it went in easier the wrong way. When I did it the right way I had to fight with it more to get it to line up. So I can see why this went in the wrong way very easily. The first picture here is the correct way and the second picture was the way it was installed in my computer which is wrong with the vent covered. 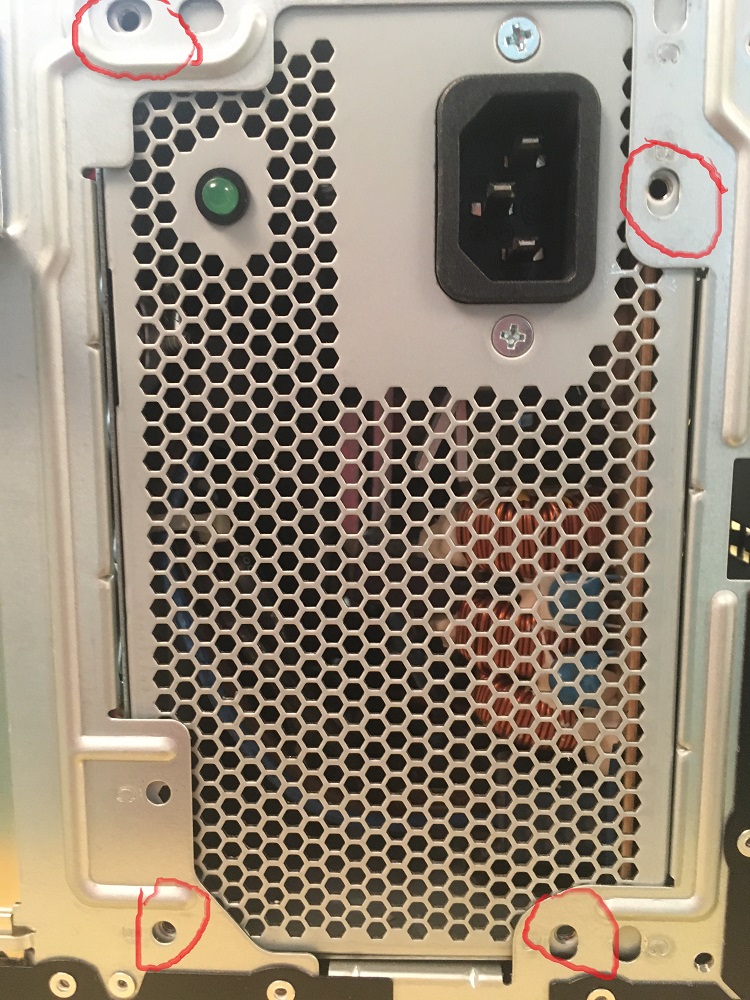 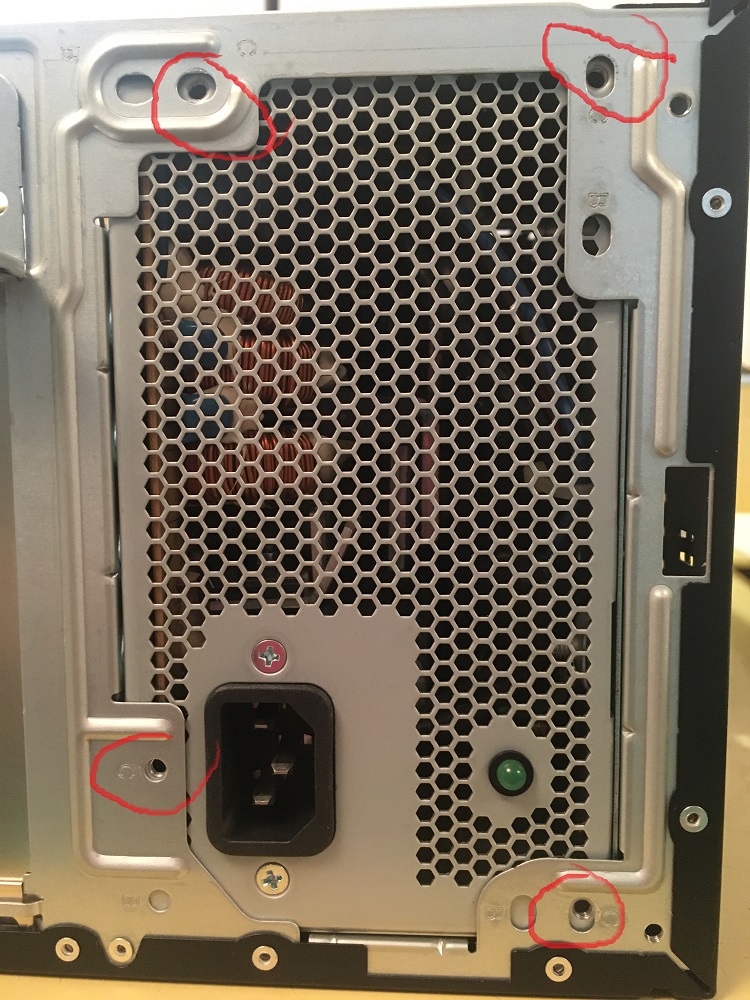 So my question to HP is what are YOU going to do to fix this mess up?

As the manual clearly shows the correct orientation,  which I explained,  is it possible the service tech made the error.  I have the m8100e, 9280t, and a Dell on my bench. All show the same screw pattern.  Wish you best, OK?

BTW, the CorsairCX600 would mount fan down. It exhausts out the back.

No YOU is not to YOU. YOU is to HP. I get that you are a volunteer here. I think HP owes me another power supply at least since I have been cooking this tower probably since the HP contractor replaced the motherboard is my guess. I am sure all that heat wears on other components. How does one bump this thread to HP people?

Here is the work order I saved from the contractor HP had to install the bad mother board. Apparently it was a John B. who was the Service Pro. This is the guy who probably installed the power supply upside down. How was I suppose to know he did it wrong? 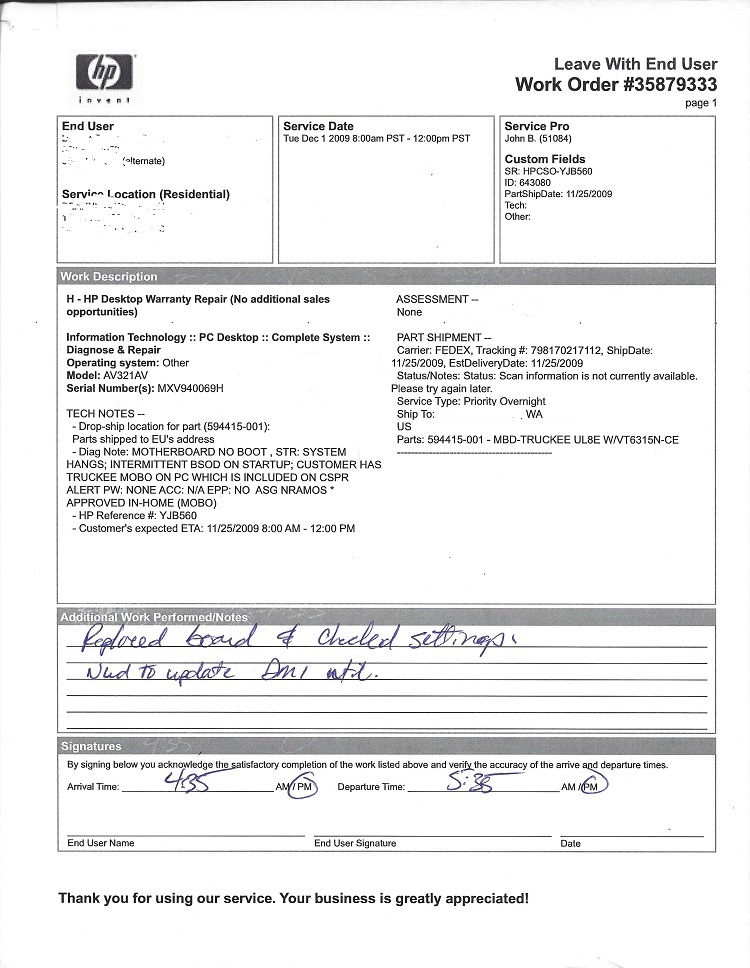 Well I have to say it was such a nightmare dealing with HP right after I spent about 2k on a top of the line computer with HP. Actually when I bought the unit HP already knew the motherboard was bad but didn't warn buyers but just took our money. Of course when we got the units they didn't run right at all and so buyers flooded the forums and got nowhere fast. Dealing with India support was insult to injury. I waited two months to get my new motherboard installed by HP and it was such a frustrating disappointing experience. I see here, there are few in the forums and I see HP has really not improved from 2009 when I bought that computer. It is just again insulting to have to realize that when HP so called fixed my computer that in fact the technician installed the power supply up side down and set me up for years of a very hot running computer. It just never ends with this company. I can see why there are warranties but when a manufacturer installs something incorrectly and then down the road this causes it to fail they really should take more responsibility. I know if I make a mistake with my customers I take responsiblity and fix it asap. I don't send them to India to endure a third class support system.  I bought a brand new Dell computer for my home office for another station. Zero problems and it has been a couple of years. But I don't like all the bloat wear. I wasn't about to buy another HP and I was right to do that now that I have learned about this power supply. I am like an elephant I don't forget. From the looks of this forum so many have moved on away from HP. There used to be way more involved. I am also getting all sorts of cutsy emails from HP praising me about coming to the forums so they know they have pissed folks off  with their approach and are pleading for them to return. I suggest HP needs to change how they do business first before they can ever expect anyone to come back and spend again let alone come back to the forums. Why would many want to be addressing all the issues that HP creates?

I intend to order a power supply on Amazon G3 650W and hopefully that will work out. I won't waste my breath or my money on any more HP products. I feel ike a complete fool for buying from HP. I currently have FOUR 27xi, Officejet Pro 8600 PLus, and a dead e9180t due to HP's inept ability to install my power supply upright not upside down. HP is good about taking your money and offering a horrible warranty and for good reason.