Does anyone know if the HP Z800 workstation is able to take the Intel Xeon X5690 processor? If so, when buying this processor, what other accessories should I be considering so that it'll work properly?

This is a high power Xeon and has a max TDP of 130W so you need a high capacity heatsink with these hot CPU's. I believe not all heatsinks are the same...

Others may be able to specify exact part numbers..

I do not kow if a higher power heatsink is required.

Please click "Accept as Solution" if you problem was solved. This helps other forum readers.
Was this reply helpful? Yes No

Dan has provided the HP part number for the Z800 motherboard version that will accept those faster X5690 6-core processors, which run at 130 watts max TDP.  There is only one sSpec code for that processor, SLBVX.  You can look that up on the Intel Ark site by googling "X5690 xeon" and seeing that the current price from Intel is about $1660 USD.  Best price on eBay used right now is about $1200.  That is the "top dog" processor in the March 2013 Z800 QuickSpec HP-certified processor list Skylarking links to.  Make sure to have the latest BIOS loaded to get the latest HP processor microcode list available during boot.

Regarding the "high performance" heatsink/fan for the workstation..... there is the regular performance one that is easy to find, and then I have also found info on the high performance ones.  Those, with the higher HP assembly/spare part numbers, have a higher and deeper profile overall, with significantly more cooling surface area and a bigger fan.  Their width looks the same, as you'd expect given the space limitations for the dual sockets on the motherboard in that fixed side-to-side dimension.

These two versions each have their fans topping out at the upper edge of the heatsink, so the higher performance version is also taller given that its fan is bigger.  The interspace between the base plate screws is a fixed reference (they both attach to the same processor socket).  From that I'd guess there is a shift from 80x80x15mm to 92x92x15mm fans.  Note that the same part under the HP listing method will virtually always have two part numbers (assembly versus spares part numbers).  Thus, on eBay I usually search under both numbers for a part if I have both available.

The HP "assembly part number" versus "spare part number" here start with 4 versus 5 respectively, and you can search under all those numbers for best pictures and prices.  You often can find the pictures of parts on the HP parts surfer site using a HP spare number search once you have that (the numbers above that start with 5).

Of interest, the Z400 has enough room around its single socket that its "performance" heatsink does not need to be shifted leftward.  It has a different part number.  That one will fit on the Z400 but not on the primary socket of the Z600 because it impinges on the memory fan shroud plastic parts.  It can, however, fit on the secondary socket of the Z600 if you bend its rear air deflection plate down vertical.

Here are two pictures of the higher Performance Z600 Z800 heatsink/fan which is larger and can handle processors with max TDP greater than 95W.  Note the fan grill.... its shape is unique to this heatsink/fan combo: 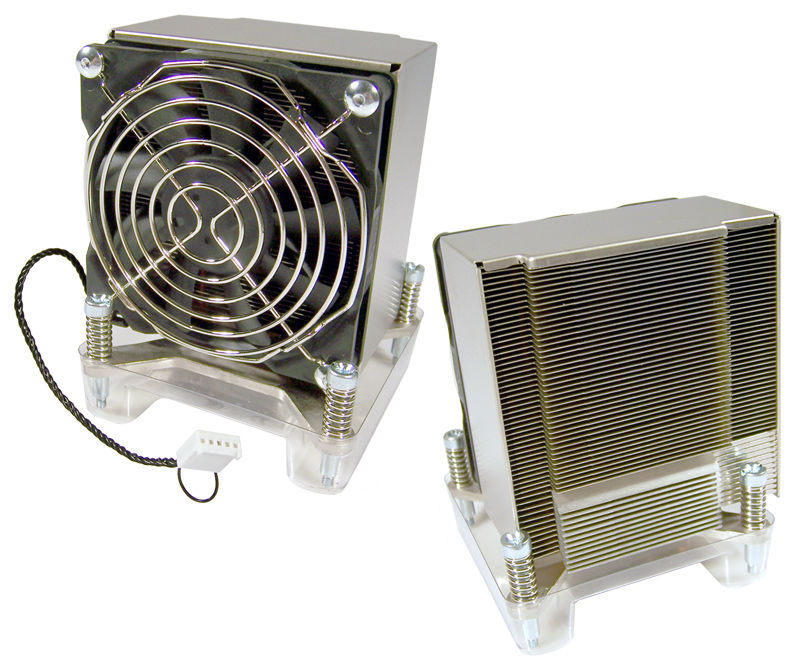 In contrast the unit below is an official Z600 Z800 "Mainstream" heatsink/fan rated for up to and including 95W max TDP processor.  Side by side this one is smaller overall, with less heat tubes for cooling and lesser overall surface area: 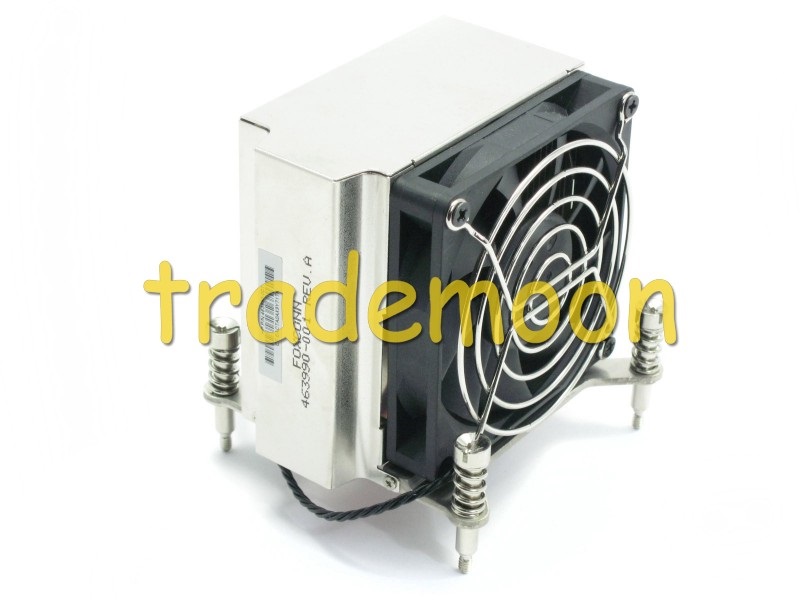 HP Recommended
High performance heatsinks or liquid cooling (dual cpu only for liquid cooling) and board revision 591182-001 for 130w 6 core cpus. Use the HP Parts Surfer (google it) and enter your Z800 part number for example: FF825AV. Heatsinks and liquid cooling units are going to be cheapest directly from HP. Really, not kidding. Cheers!
Was this reply helpful? Yes No

Here is that latest generation motherboard Dan and Z820 refer to, from the Z800 Partsurfer listing.... it is the bottom one, with the highest Spares part number.  That is the same one that will have the added capabilities and have the latest Boot Block date, and be able to run both the 56xx and 55xx processors listed in the latest QuickSpecs for the Z800.  This same method works for finding the latest motherboards for the Z600 and Z620 (not shown): Here is the image capture from one of those off eBay, showing the label Dan refers to.... zoom in and squint: Over time I have found eBay to be a source to find the Spares part numbers from an Assembly part number, and vice versa.  This motherboard is/was on eBay for $175.00 USD, by the way.  If you know both the AS and the SP part numbers you sometimes can find the item listed on eBay under one of those but not the other.  If you buy through the HP Partsurfer you'll not have to worry about dealing with used parts, etc, of course.  Agree that those prices are very fair for new equipment, Z820.

Here's a new one that has the plastic protector covers over the delicate processor socket pins..... the little sticker you'd be looking at is up by the heatsink towards the top right corner: My question is on the Z800 Motherboard, my original board died and HP replaced it, I have an e5520 in this box and want to upgrade.

I do not kow if a higher power heatsink is required.

Although I am an HP employee, I am speaking for myself and not for HP.
Please click the "Accept As Solution" button if the answers solve your problem.
Was this reply helpful? Yes No

your question about additional Processor :

you can reqeust the following Option Kit:

where it requires  1110W Power supply. So please check your power supply since Z800 delivered either with 850W or 1110W

I do have the 1100 Watt PSU, just want to make sure that I can use the 56XX Processors, another post said this

Here is the best way to determine what procesors a Z800 supports.
Go into the F10 BIOS BIOS settings, and look at the Boot Block Date in System Information.
If the boot block date is 01/30/2009, the system only supports the Intel 55xx processors.
If the boot block date is 11/10/2009, the system supports both Intel 55xx and 56xx processors.
Although I am an HP employee, I am speaking for myself and not for HP.
Please click the "Accept As Solution" button if the answers solve your problem.
I have the Boot Block Date of 1/30/2009 so based on the info above I cant use a 56XX, if that information is incorrect that would be great and I will drop a X5680/90 in with the High Performance HSF.
As mentioned before the installed processor is E5520 so its the 55xx generation...
Was this reply helpful? Yes No

Does Anyone know what type of heatsink coulb be used with Intel Xeon X5690 CPU?

I need to upgrade my Z800 with two of these processors.