I have a HP Z440 with windows 8.1 and I'm trying to downgrade to windows 7. I received a CD from HP guys and start doing it. During installation progress I had an error "A required CD/DVD drive device driver is missing. If you have a driver floppy disk, CD, DVD, or USB flash drive please insert it now. Note: if the windows installation media is in the CD/DVD drive, you can safely remove it for this step."
Until now I've tried:
- remove DVD and put it back;
- copy image on an USB;
- enable/disable usual "stuff" from bios.
Can you please help me with some answers?
Thanks!
0 Kudos
Tags (4)
View All (4)
6 REPLIES 6

I would first check for BIOS settings. I suspect your system came ready for Windows 8.1 including Secure Boot enabled and the drive formatted as GPT instead of MBR. You will need to make changes in the BIOS to enable Windows 7 to install

I work for HP. However, all opinions and comments are my own.
0 Kudos

HP Recommended
I will do that. Let you know. Thank you!
0 Kudos

I have seen this before and posted on it in the forum.  Rare, but no fun when it happens.  At least in the past it has been a pretty easy fix.  This has come up using a Microsoft "system builder" W7Pro64 with SP1 disc.  Here is what I finally figured out:

The DVD cannot have infinite drivers on it, but usually it has enough that the optical drive present will work during the install.  The driver has to be included in the active drivers in the boot-off-of- DVD phase of the install.  Later, from the archive repository on the DVD in the full OS install phase of the system load that missing driver may get installed, but your issue is happening earlier than that phase.

The solution for me has been to snag another DVD-ROM or DVD-RW from my stash of HP parts, usually older.  The liklihood of running across a series of HP DVD drives that are not supported in the boot-off-of-DVD phase is low.  This has been the solution every time.  And, I have clean loaded W7Pro64SP1 on a lot of HP workstations.... this concept is generic and logical if you understand that there are different phases of an OS install, and different drivers available for each of these phases.

When HP sends you a bootable build it has a clone on its boot drive that is fine-tuned for that configuration of hardware.  Once you start doing downgrade installs your chance of coming up against this type of issue ncreases, even if the DVD is from HP.

You want to use your W7Pro64SP1 HP-sourced DVD rather than the MS system builder DVD if at all possible because it likely will include the HP OEM COA mechanism that will let your load be automatically HP activated, and clonable to another equivalent workstation.  So, don't give up until you've swapped in a few DVD readers.

Short version:  Try another DVD player... they are easy to slip in and out.

Could you please share with us the serial number of your z440 to  check the original hardware configuration ?

HP Recommended
SOLVED
All you need is drivers for AHCI, in this case iaAHCIB.inf
2 Kudos

I took thos photo. I hope this is helpful. After this step everything is as normal. Good luck and thank you everybody! 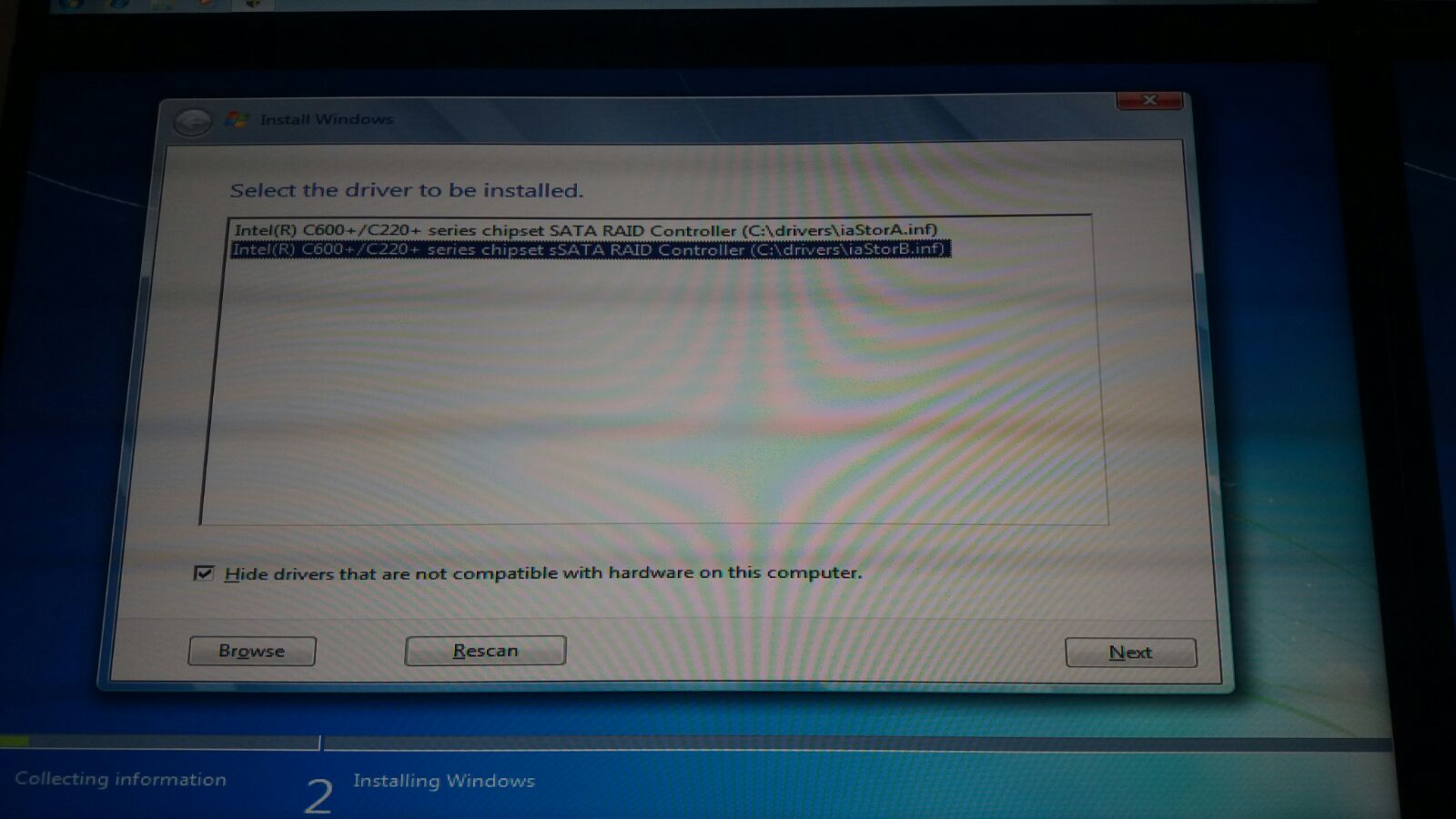