I'm using the HP OMEN Accelerator with a Dell XPS 13 9370. I have a MSI Radeon RX 580 installed in the Accelerator, which works fine. Recently, i purchased an internal SATA-SSD (Crucial 500 GB) and installed it in the accelerator, but my computer is not recognizing it. I know that a similar question has already been asked here: https://h30434.www3.hp.com/t5/Gaming-Accessories/HP-Omen-Graphics-Accelerator-not-recognizing-SSD/m-...

The suggested solution here is to initialize the SSD in Windows Disk Manager.

However, I am unable to do that: When I try to initialize it with GPT, I get an error saying

The specified disk is not convertible because the size is less than the minimum size required  for GPT disks.

When I try to initialize as MBR, it just says Incorrect Function: 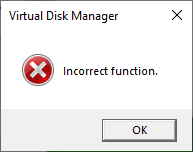 Furthermore, the disk shows up in Disk Manager as uninitialized and with no space:

A few minutes after booting, the disk will disappear entirely from Disk Manager and only reappear after a reboot.

I tested the SSD on a different Computer where it works fine. I also already tried all of the following:

I hope anyone can help me with this.

This looks like a possible hardware issue with the Hard drive.

Have you tried to run a test on the Hard drive?

Have you tried to use a different Hard drive connector?

Have you tried to connect this hard drive to another computer and check if that works.

Let me know how it goes!

Hey @Jeet_singh, thanks for your reply.

As stated in my post, I did try the SSD on another computer, where it works fine. I therefore believe that this is not an issue with the drive itself.

I installed all the software mentioned in your link, but it didn't help me any further.

Next thing I will try is to reset my Laptop entirely, install all that software again and see if that does anything.

Anyway, thanks for you help.

Please take your time and get back to me with the results,
I'll be awaiting your response and would be glad to help.

Take care now and do have a fabulous week ahead. 🙂
Regards,