Everything runs pretty good but a couple of months ago the front fan started to run at full speed all along. Very annoying because that 120mm fan is running at full speed and it sounds like a hair dryer. Removing the cable from the mainboard gave me a P90B Error (fan not connect, not safe...) and so I had to connect another fan which I had around (BeQuiet 100mm) to it.

Today I was able to remove the front and top cover of the case and was able to unscrew the fan. I connected it to the top fan connector and it was immediately ramping up to full speed again. I also noticed while checking fan speed and temperatures that the "PCH CHIP" Temperature reads a constant 103-105'C which I am worried about. Maybe the fan was ramping up because the mainboard sensed that PCH temp sensor? 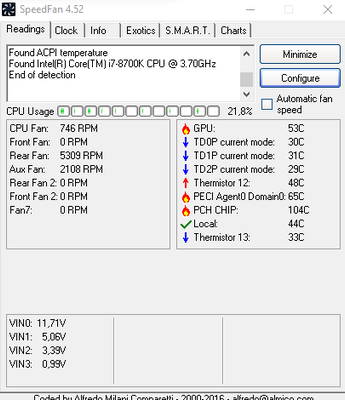 I am clueless right now and will probably be replacing the front 120mm fan with another bequiet or noctua fan. Any suggestions? Also I am not super happy with AiO for the CPU. Temperatures are getting up to about 80'C 😕

As for the GPU - it's ramping up to about 75'C while the side is open... I was thinking about getting the 2080 Super watercooled. Unfortunately the case itself doesn't have much space. I wasn't even able to move it from the upper PCI slot to the lower one due to the hdd case being in the way 😕 Anyone had similar issues and has a fix / idea?

Also I was thinking about replacing the M.2 drive with a larger one. I considered the Samsung 970 EVO 1TB a good option. How can I transfer the data from the old M.2 to the new one and then make a switch?

This message indicates that the system fan is not spinning at the expected speed or a problem exists related to the heat removal system. This message occurs to help prevent costly damage to the computer.

To fix this error, use the following steps:

And, also you can Clone your M.2 drive via EaseUS Todo Backup. Make sure that both the SSDs are recognized by your computer. Boot from the cloned M. 2 SSD.

NOTE: HP does not recommend upgrading or downgrading hardware parts or software that is bundled with the product as It may affect the manufacturer's warranty and performance, however, you could change the configuration at your own discretion.