The issue I’m seeing is imbalanced airflow inside the case. I.e. 2x high pressure fans are barely getting any fresh air supply.

If I put a rear fan, regardless of the model - the rad fans spin it up like crazy since it’s only a 92mm fan. I ended up getting rid of it all together but I don’t really like running a negative pressure system.

Any ideas on how to address this?

@I_Am_Number1 , welcome to the forum.

I want to make certain that I understand how your fans are setup before giving you any advice.  How are the rad fans mounted: pushing air through the rad as output or drawing air as an input through the rad?  Airflow in a smaller case will always be a challenge.

For instance, in my Custom Build in my signature, I have the 3x120mm fans mounted to the rad pushing air through it and out the top of the case.  I have 2x140mm fans in the front as inputs.  So, since I want positive airflow, I have the rear 140mm fan installed as an input; drawing air into the case.  There is no filter on the rear fan.  This only works because I have the computer on a table away from the floor and a fairly dust free environment.  I know this sounds counter-intuitive, but it is working great with my system.  I monitor the temps continuously.

I thought about flipping them around and making them blow in the case, however, due to limited air circulation in some parts of the case I think this might result in hot air standing there (like corners in the lower part of the case).

I did mount the rear fan as input - I didn't want the fans to create even more negative air pressure, however either because of how the motherboard controls the fan, or because of the existing negative pressure, the fan speeds up to rocket speeds whenever rad mounted fans start accelerating (powered from CPU fan connector). I also tried different fans - all with the same result (stock foxconn, Noctua NF-B9 redux, Noctua NF-A9x14 HS-PWM). All spin up as jet engines.

Hello
I probably didn't understand everything you did ..
But in any case, there is a rule to follow:
The hot air must be expelled from the tower, under no circumstances should you have a fan that brings air to the box!
We can find diagrams, we must follow it is possibilities
Adding too much fan does not necessarily solve the problem!
The fan which blows the air from the box to the outside must not be too fast compared to the internal fan
The temperature of the room is important, as well as the location of the tower signature:
Expert volontaire :Forum Fr 17-10-2009 :
Sorry i'm using translate.google:
give the model and P/n product number of the device :
example: HP Phoenix h9-1228ef HPE product no.P / N: C0B64EA :
Please remember to mark the answers this can help other users:
please click on the accept as solution button if message provided an answer / solution to the problem

The diagrams you provided are true for most typical cases. Direction of air for water cooled systems though has for long been a point of debate whether you want to cool the rad with the air from outside or slightly preheated air from the inside.

So far I ended up doing the following: added 2 more high pressure fans for the rad in push-pull config since the top of the case is not very friendly for high airflow. Temps went down 10-20 degrees depending on loads. Put back rear fan as intake through voltage reducer (read - resistor). It was the motherboard that was spinning it up like crazy.

All fans are Noctua. Rad fans are 2.83 mmH2O, though I doubt they can reach their full potential due to back-pressure from double layered top cover.

For now the remaining question is: is there a way to turn the case into pressure-positive and how do I test the airflow - is incense sticks the only way? 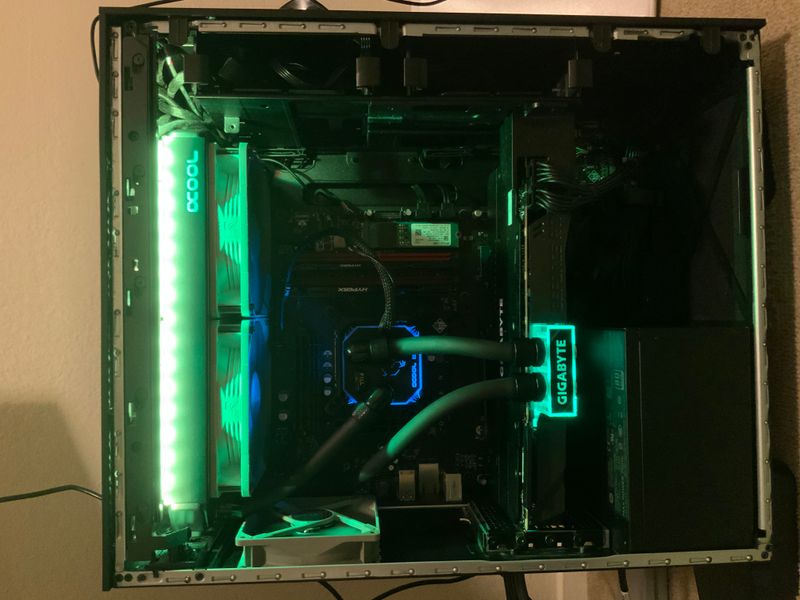 Q:  For now the remaining question is: is there a way to turn the case into pressure-positive and how do I test the airflow - is incense sticks the only way?

A:  Anyway to create smoke will work  Just make certain that you use enough to show the circulation.  I have seen every type of device used to circulate the smoke.

Here is a very well-written article that I just found:  http://www.thetylergibson.com/airflow-guide-for-pc-enclosures/

It will give you a lot to think about, I am certain!  You can most likely find hundreds or articles like this one on the Internet.  The major take-away for me was, you want more air flowing out than in.  As the author states, this seems counter-intuitive.  I am going to change my setup a bit to see if it makes a difference.