Hello, everyone. I would like an advise in the following matter regarding fan controls and heating while gaming and idle-ing.

First i will tell what i have done, you will have a big picture and and maybe another ideea:

Problem : during games, like diablo 3 with graphics on medium, i was hitting 98 /99/97 - sources intel extreme utilities and omen comand center and also CPUID HWMonitor- i said ok.. but for this laptop should be okish to deal with it. even though hp cool sense is slacky and doin nothing or maybe it helps the computer to throtle 🙂 - Hp-Omen15-dc1xxx

I tried to adjust graphics manually and auto with GeForce experience and Nvidia settings but not any single result.

So now there is no game to play with decent graphics, excluding max, with less then 93-94 degrees and also with a cooler stand. 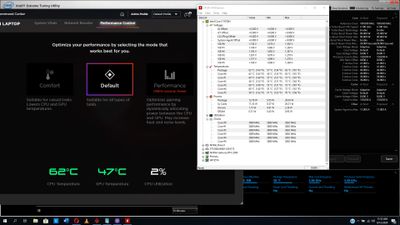 Here is what i did:

1. Read topics here on the forum and cloncluded to undervolt a bit with intel extr util. so i did the offset to -0.100 V and that reduces the heat somewhere between 1- 4 degrees but if the memory ain't sufficient it 'll just load more heat.

2.Increasing virtual memory and alocating manually to different games resulted also in 1-2 degrees off, but it depends on the hard drive/ssd .

3. disabled the fan in bios, with the offset undervolted as mentioned and put on the confort spec in omen command center resulted to almost 7 degrees off but lower specs from proc and gpu. i have to mention the notebook here does not have fans control and all the bios updates done.

4.i had i cleaned before tryn those 😄

what i am about to do now:

2. change the thermal paste of the proc from the stock one to grizzly kryonaut.

-- the laptop has all the updates bios and windows and everything, up to date !