turn on suggested results
Auto-suggest helps you quickly narrow down your search results by suggesting possible matches as you type.
Showing results for
Search instead for
Did you mean:
Options
PanzerPeter
Level 1
4 2 0 0
Message 1 of 3
106
Flag Post

Today I received my new MFP M479fdw and wanted to check the color printing performance, so I downloaded an image and printed it. What I found was that there were black "contours" added to some parts of the image where there are none in the original image.

The test report picture you print (with the color bands) also shows slight overlap between the grey and magenta bands, about 1mm. There's also a very slight gap (where white is just showing) between the orange and green bands.

I've run the calibration process at least 3 times but the problem remains.

I took a cropped part of the test image I printed and took a picture with my phone to compare side by side.

Please ignore the color balance, edge blur etc. Just look at the black contour, for example between the flower and the "color palette" and on the left edge of the "ColorSync" label. There's no black in the original, so where does it come from???

Also note the red line segment at the top of the photo. It seems almost black on the printout.

On the grey square with black dots, look at the right edge. There should be a white outline, but again there's a black border.

I tried printing both from Chrome and Gimp and it shows up the same. 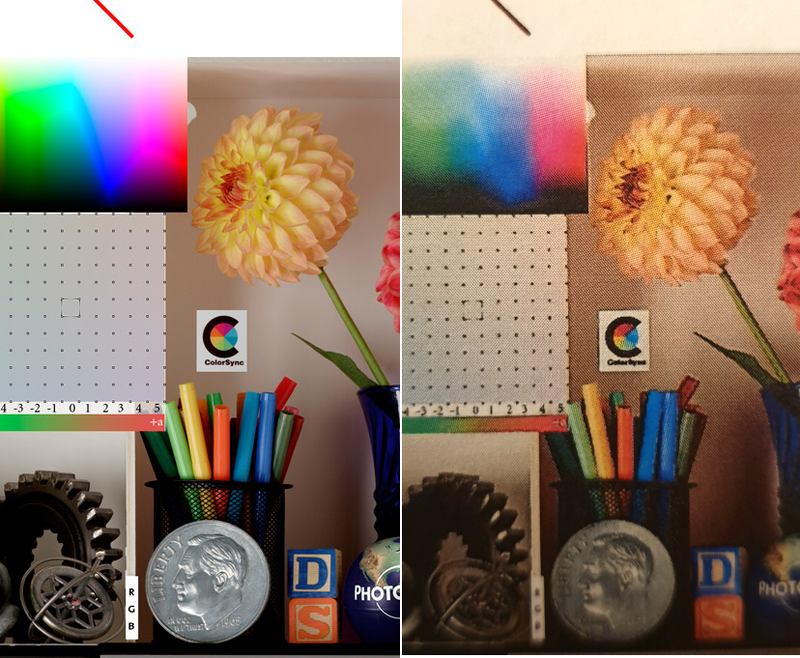 If the internal test prints do not line up that would indicate an issue this the printer. First ensure that the firmware is up to date and then try Calibration steps again. This is unusual for a new out of box device but it does happen. I know that tech support will ask you to perform a factory reset and start over if you call them. If purchased locally you can ask about exchanging it.

If you find the information provided useful or solves your problems, help other users find the solution easier by giving kudos and marking my post as an accepted solution.
Reply
0 Kudos
PanzerPeter
Level 1
4 2 0 0
Message 3 of 3
83
Flag Post

First thing I did after running the initial setup was to download and update the firmware. Guess I should have mentioned that as well 🙂

Anyway, it's been done. It feels like there's some alignment issue, but if the calibration doesn't fix it then I don't know what will...

I'll post a photo of the internal test page as well tomorrow or something.

But you agree that the black contours look weird, right? Perhaps it's some "smart contrast" thing. Who knows?

I'm aware that this model is probably not primarily intended for photo printing, but it just looks wrong.