I've already gone throught their troubleshooting guide for real-time audio issues, and all their advice did not solve the issue.

I contacted their technichal support, and did all they told me, but still haven't fixed the issue and they told me to contact directly to HP.

The thing is that I can't set the Process Buffer or the USB Buffer higher from the Traktor S8 driver controller manager (ASIO), and however i keep getting some dropouts.... very frustrating...

However, when i select as audio driver the ASIO4ALL, problems disappear and there aren't anymore audio drop outs. So it's something related to the drivers that conflicts with my computer, but can't fins what it is.

So after going through the troubleshooting guide and applying everything that was said in there, my problem was and still is with ACPI.sys, but disabling the 'Microsoft ACPI- Compliant Control Method Battery' in the Windows Device Manager didn't work at all, latency was the same, which was the only solution they knew for this problem.

In fact, what i did as i couldn't figure out what caused the issue was to do a factory reset with HP Recovery Manager, as if the computer was brand new. When everything was set up, the first thing i did was to set the battery plan to performance mode and in advanced tabs i set everything as they recommend, then i downloaded LatencyMon and still the same problem occured, as you can see in the following picure:

In light of such results, the next thing i did was to update all drivers, through Intel updater, through HP Suppot Assistant Updater, and check what happened. The issue was still with ACPI.sys (but not anymore the latency issue caused by the ndis.sys).

The next thing i did was to update Windows 10 to the latest public version (1809), and still the same.

Afterwards, i used a prograam from iobit to update all the drivers, but problem was still there.

So here i am now, with everything up to date, the power plan set to its best performance, and still having issues just with ACPI.sys.

BIOS is of course is on the latest version, and in the BIOS the system is set to Performance Mode.

I think that it may be related to the USB Ports, as they are 3.0 USB Ports? I've tried the same on my father's HP Elitebook 1030 G2 on Same Windows versions and there i don't have issues, as ACPI.sys only reaches 0.3 ms of execution time (below 1ms is okay), so it's not related to being an HP computer, nor a Windows problem but something specific of the hardware and drivers of this computer.

So, what can i do? Can anyone from HP Technichal support help me to fix this? Thank you!

Here are the latest results of the LatencyMon:

Your system seems to be having difficulty handling real-time audio and other tasks. You may experience drop outs, clicks or pops due to buffer underruns. One or more DPC routines that belong to a driver running in your system appear to be executing for too long. One problem may be related to power management, disable CPU throttling settings in Control Panel and BIOS setup. Check for BIOS updates. ​

WARNING: the CPU speed that was measured is only a fraction of the CPU speed reported. Your CPUs may be throttled back due to variable speed settings and thermal issues. It is suggested that you run a utility which reports your actual CPU frequency and temperature. ​

The interrupt to process latency reflects the measured interval that a usermode process needed to respond to a hardware request from the moment the interrupt service routine started execution. This includes the scheduling and execution of a DPC routine, the signaling of an event and the waking up of a usermode thread from an idle wait state in response to that event.​

Interrupt service routines are routines installed by the OS and device drivers that execute in response to a hardware interrupt signal.​

DPC routines are part of the interrupt servicing dispatch mechanism and disable the possibility for a process to utilize the CPU while it is interrupted until the DPC has finished execution.​

Hard pagefaults are events that get triggered by making use of virtual memory that is not resident in RAM but backed by a memory mapped file on disk. The process of resolving the hard pagefault requires reading in the memory from disk while the process is interrupted and blocked from execution.​

NOTE: some processes were hit by hard pagefaults. If these were programs producing audio, they are likely to interrupt the audio stream resulting in dropouts, clicks and pops. Check the Processes tab to see which programs were hit.​

Please do a clean install Audio softeware/driver, this should help.

(a) Download the following driver and save on your computer,

Hi, Thank you for your prompt reply! Which driver should i uninstall?

Realtek High Definition Audio Controller, Intel for Screens Sound, or another one? 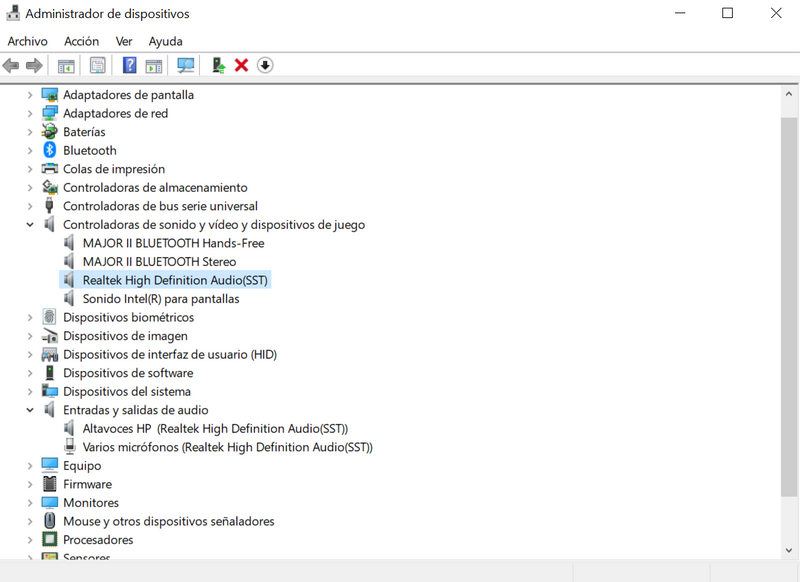 Hi, Thank you for your prompt reply! Which driver should i uninstall?

Realtek High Definition Audio Controller, Intel for Screens Sound, or another one?

Hi, i tried the solution you suggested but it didn't work...

Latency is still there... Problem not fixed... In fact, with the driver uninstalled latency is still an issue, and ACPI.sys still gives peaks of more than 1 ms... what can i do now? 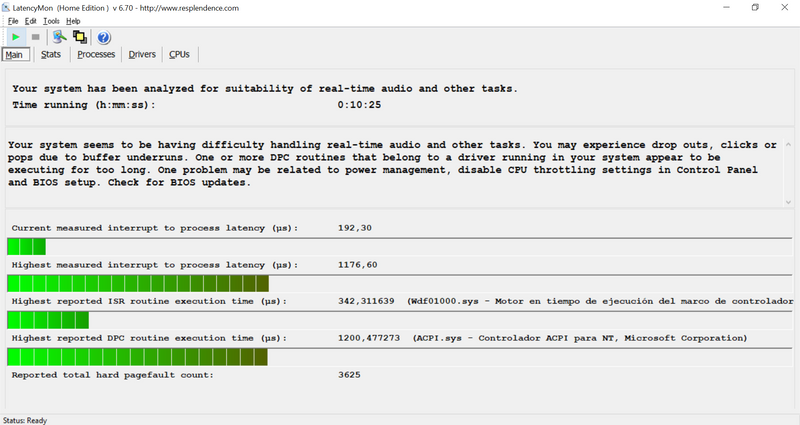 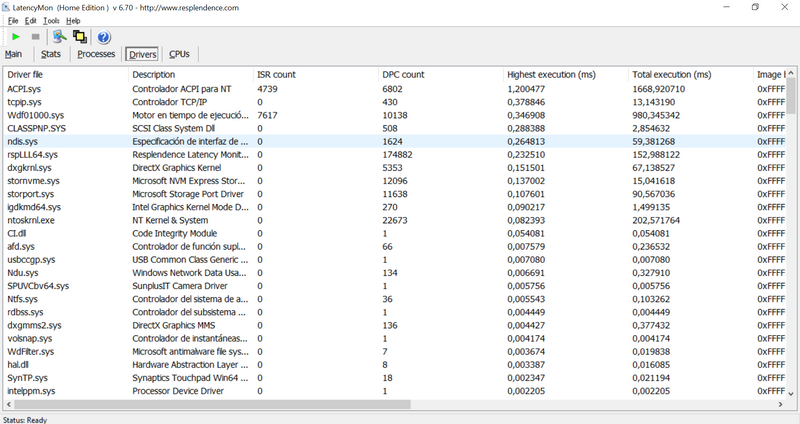