When i try to make a recording using the laptop's built-in microphone, there is an almost 2 second delay from ...when I start talking to ...when my voice actually starts being recorded.

When I press the "Record" button and simultaneously start counting up from 1, the sound wave that the software displays doesn't show sound activity until 1.25 seconds after I press Record. When I play back my sound-bite,

[2] then, I can hear my recording start out at a low volume, then slowly increase until the intended volume level is reached.

So that's a total of 1.25 seconds for the microphone to wake up, then another 1/2 second to slowly increase the volume.

This is very similar to the sound delay problem that's been reported across HP's product line since 2017. That fix, was a registry tweak. Refer to a reply post by user Xaoc at URL:

Does anyone know how to tell the microphone (driver) not to go to sleep?

The recording software I am using is Audacity v2.1.3. This problem was reproducable across HP's Omen, HP's Envy-x360 (both returned to HP) and on HP's new Spectre-x360. The audio delay problem has been systemic across HP's laptop product line and I suspect the same is true for the microphone.

While I know replies are well intentioned, please do not tell me to run the HP trouble shooter, re-load Windows, or delete then re-add drivers.

Thanks for your support.

@TekHead
Thank you for posting on HP Support Community.

An incorrect setting in Windows could cause microphone issues. Use Windows Sound settings to configure the microphone.

Thanks for taking the time to reply.

>> Did this happen after a recent window or software update? Is this the first time setup?  <<

A-   I’m guessing that this problem always existed, as it was also on my other 2 brand new laptops that were returned to HP because of numerous driver issues. HP sent me 2 Spectre-x360s as replacements. Also, “all” new HP laptops have the same built-in delay factor when playing a sound bite or the “Ding” sound. (I tested this on laptops on display at BestBuy.) Other mfr’s laptops did not have this issue. For the delay issue when playing a sound, pls refer to postings at:

see also page 2 in that thread.

The solution to eliminating the delay when playing a sound was a registry tweak.

>> Connect the microphone to the computer. <<

A-   I am using the laptop’s built-in (internal) microphone.

Here’s a screen shot of my [Recording] tab: 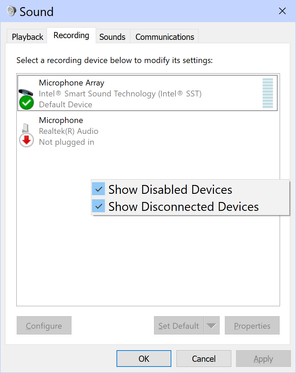 The first entry, I assume, is my laptop’s built-in microphone

I did adjust the level, as suggested. Here’s a screen shot of my [Levels] tab: 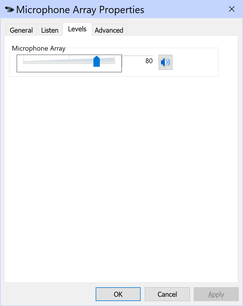 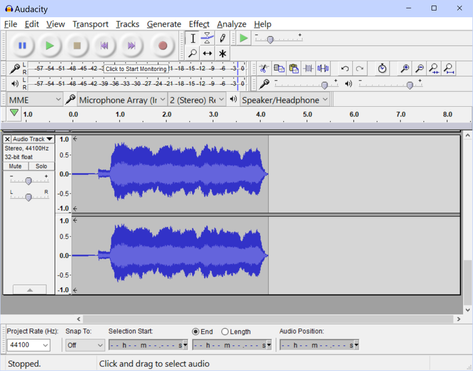 I started singing a constant note just prior to pressing the Record button. In this particular case, as you can see, the intended voice volume doesn’t kick in until 1 second after I pressed record.

Howie The TekHead
Was this reply helpful? Yes No

@TekHead
Let's try and allow the system apps to access your microphone, use these steps:

Click the Change button, and then turn on the toggle switch to permit access.
Keep me posted for further assistance.

Click the Change button, and then turn on the toggle switch to permit access.
Keep me posted for further assistance.

The toggle switch was already set to:  On

Also, while there I did observe the following setting:

"Allow apps to access your microphone" was already set to:  On

Further down that Settings page, I looked at the section entitled:

Since one of the MSFT apps I was using for my test was Voice Recorder, I observed that the toggle for Voice Recorder was set to Off. So I changed it to   On

Do you know if I am the very first one to report this problem, in that HP has no idea what the definitive fix for this is????

Has this problem been reported to HP's product development team so that they can come up with a definitiive solution???

Thanks for the assist.

Howie The TekHead
Was this reply helpful? Yes No

@TekHead
I would request you to contact our Support and our Support Engineers should be able to Remote into your computer and sort this out. HP Support can be reached by clicking on the following link: www.hp.com/contacthp/

i have both delay in microphone and sound

but the microphone still having a problem with it so i think i am going to install an older version of driver until you fix it HP.