Replacing the SSD inside an HP Envy x360

This laptop came with a 128gb SSD and a 1tb SATA, but recenly the SATA corrupted and has been getting worse and worse over time - makes weird clunking noises and periodically destroys files, so it's well and truly dead. I only used it for a Dropbox folder so no real harm done, but I do need the capacity so a new drive was needed.

I figured that if I'm replacing a drive, I might as well go for a 1tb SSD since they're readily available at reasonable prices now. I looked inside and found that this laptop has an M.2 socket with an M+B key 2280 SSD inserted, but it looked like the socket would take a regular M key SSD so that's what I've ordered. A Crucial P1 M.2 2280 1gb NVMe to be precise.

I have a fairly large amount of software installed on this with lots of time consuming configurations. I'm a web and game developer by trade so everything is set up precisely for me as a developer. I've over 300 SSH logins saved within just one text editor - that kind of thing. It'd frankly just be too much work to set everything all back up again so I'm trying to instead clone the old drive to the new. Here's the kicker though - there's of course only one M.2 socket in here so only one drive can be connected at a time.

I found another old SATA so replaced the corrupted drive with that to use as a transfer medium. So, here's my effort so far:

- At this point I checked BIOS. The system was already set to Legacy mode with USB drives set first in the legacy boot order. Secure boot disabled because legacy mode cancels that out. There appears to be some TPM settings with near zero explanation, but as far as I understand it the TPM chip is only used if secure boot is enabled so that shouldn't matter. I tried switching legacy mode off, still leaving secure mode disabled, and rebooted. Same issue so reverted back to legacy mode.

- Disconnected the SATA just to make sure that wasn't trying to boot. Same issue.

- Reverted to the original drive, booted back up, and installed AOMEI Backupper.

- Within AOMEI I created a new system image and a new WinPE bootable USB in legacy mode so that I could boot back into AOMEI to restore. Shut down, swapped the drive back out for my new SSD, inserted the USB, rebooted and again dumped me in the recovery tool, not the USB.

- Shut down again, swapped back to the old drive, booted up, used AOMEI to create another bootable USB this time for UEFI mode. Repeated the above, same problem.

- At this point I gave up with USB boot. It just doesn't work in this laptop. Instead I used the recovery mode to "reset this pc" which gave me a vanilla Windows install on the new drive. One that actually boots, so I at least know the new drive works.

- Installed AOMEI into the new Windows and used it to restore the system image created from AOMEI in the old Windows. This successfully rebooted into an AOMEI restore mode which presumably is what the USB should have done. Restore completed successfully. Rebooted, and right back into the "Preparing automatic recovery" screen and then the recovery mode.

- Swapped back to the old drive, booted up, and used AOMEI again to this time create just a partition clone of the Windows drive instead of the full system. Switched back to the new drive, reset to get a vanilla Windows, installed AOMEI and used it to then restore just the one partition. My thinking at this point being that the boot sector created for the vanilla Windows would be unaffected. Rebooted and again, dumped back in recovery mode.

- Swapped again, back into the original drive, this time created a disk image - apparently different to a system image. Back to the new drive, reset to vanilla Windows again, installed AOMEI again and this time restored the disk image. Same problem, dumped right back into recovery mode.

- Reset, this time installed a 30 day trial of AOMEI Pro which has a "universal restore" option designed for restoring disk images to different hardware. Restored the disk image this way and again, dumped to recovery mode.

- I then looked around more in the recovery mode and found an option to update BIOS so ran that and then repeated most of the above. Same results all round.

And that's where I'm at. Back now with my original drive and totally stumped as to how to move my system over to the new. Everything I've attempted just bricks the drive, USB boot just point blank doesn't work, and I'm becoming more and more convinced that the TPM chip is interfering.

Any suggestions please? Do I really just have an £800~ laptop that I'm not allowed to upgrade because despite all of the controversy 15 years ago, TPM was still allowed to happen? Granted I could reset to vanilla Windows and reconfigure everything, but I shouldn't have to. If I'm going to need to go through all of that I may as well stick GNU/Linux on, except that I won't be able to because the only thing that seems to work is resetting to vanilla Windows from the built in recovery tool. I don't even understand where this tool is since it pops up without even having any drives connected. Probably part of the TPM chip...

HP doesn't recommend upgrades, which is why we have limited options to help. Also, HP recovery media is the software we advise our customers to use, as it contains the OS, drivers and software required by HP and the same is encrypted, designed to re-create the partition and install the OS on a hardware approved by HP. 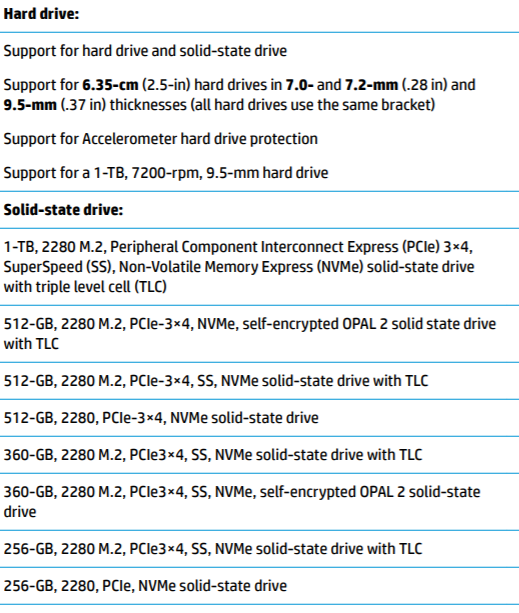 I'm a little confused. Does this mean that the only way for me to replace the drive is if I use the recovery tool to re-install the operating system to the new drive? I can't migrate my existing install?

This poses two problems for me.

1) I literally don't have the time to re-install and configure all of my individual softwares to a fresh Windows install. The whole point of wanting to clone the existing drive content is so that I'm back up and running in minutes rather than weeks.

2) If the laptop will literally only run the operating system that the HP recovery tool has been designed to install, then I'll never be able to put Linux on here. I'm just stuck with Windows 10 forever.

You can use linux as dual boot with windows at your own discretion, as HP does not support linux as of yet.

I hope this answers your question. Let me know if you need any further assistance.

If the only way to run an operating system on this laptop is by installing it through the HP recovery tool, then I don't understand how Linux would be an option.

I have Windows installed already, on the original NVMe SSD that came with the laptop. Currently I just want to be able to move this to a new, bigger NVMe but every migration option I've tried, as detailed in my original post, has resulted in the laptop entering recovery mode and failing to be able to recognise, or repair, the installation. No bootable USB has worked either - the system seems to just blatantly ignore them all.

If I use the recovery tool to install a fresh Windows 10 to the new drive, then this boots fine so I know the drive itself is working. I just can't find any method of migrating the existing install to it. It's as though the laptop will literally only boot into the operating system that the recovery tool has been designed to install and once installed that system can't be moved?

You could refer to a local tech for assistance, as you would be able to install windows of your choice and cloning as well, it's just that HP does not recommend or support it, hence there's nothing much I can say about it.

So in a nutshell then, I've bought a laptop from HP with the expectation that over time I'd be able to upgrade it - because that's standard procedure with computers - and now that I've come to upgrading and found that it's not as straightforward as it should be, HP's official answer, via their support forum, is that HP doesn't support upgrades?

You may upgrade it but the parts listed in the service manual are tested withe PC.

HP does not recommend upgrading or downgrading hardware parts or software that is bundled with the product as It may affect the manufacturer's warranty and performance, however, you could change the configuration at your own discretion.

I can't upgrade it, that's the problem.

The system doesn't recognise any bootable USB whether made as a legacy boot device or a UEFI boot device, despite BIOS being set up to support boot from USB and regardless of whether I set BIOS to EUFI mode or legacy.

I can install Windows to the new drive using the built in recovery tool, but any attempt to clone the Windows install from my old drive to the new results in an unbootable system.

The last time I buy a laptop from HP quite frankly.

I recommend you to contact the HP Support Team regarding this.

Note:  Select the country accordingly to get the contact details for support.