It has been a while since anyone has replied. Simply ask a new question if you would like to start the discussion again.
BGPhantom
New member
2 1 0 0
Message 1 of 7
857
Flag Post

Have a EliteOne 800 G1 AiO, I have the AMD 7650 MXM graphics card along with the heat sink. I’ve installed but it doesn’t work properly. I get the RGB lines on the screen. Is there a setting or switch I need to set? If so where is it? Thank you for the help in advance

Did you buy card from HP or elsewhere ? Ther series only has one option to use.

You also need to install driver for video card which is

(No other newer driver from HP).

Yes, that is the card I have . I have the HP drivers but when I install and fire it up I get just vertical bars. I think there is a switch or setting I need to do but I don’t know where or if it is. .

Hi, I have the a similar problem.  Installed Radeon 7650A MXM 2GB card into EliteOne 800 G1 Touch, set BIOS to UEFI mode to pickup card and rebooted.  The machine is cycling through colours, one at a time.  I cannot access Safe Mode at this point and have to reboot.  The only way i can get back into settings is to remove the card and use default intel onboard.

Were you able to get your PC/card working and if so how?

There is a little black connector (Circled in Red)  just left to the MXM card, you have to unplug this and plug it into the slot just above (Circled in Blue) 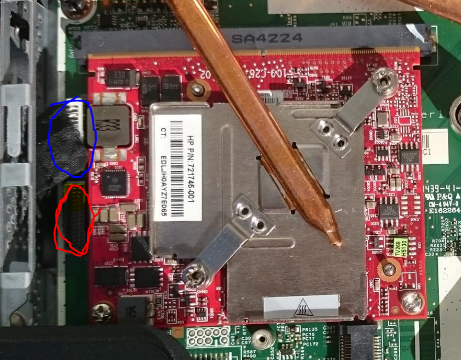 Makes perfect sense to have screen fed from a different output and I assumed, (incorrectly), that the onboard circuits would re-route the video signal automatically once a dedicated card was installed.

It's the first time changing the cable over has been mentioned as far as I can see from all related posts.

Installed MXM card with cable switched over to other/higher connector.

The machine restarted 3 or 4 times with a completely blank screen before Posting the BIOS text.

The MXM was recognised with Legacy mode enabled but I disabled it just in case.

I do not have heat pipes connected to my MXM, but have re-drilled a heatsink and used thernal paste on the GPU and removed the bracket from under the card to help with cooling.  The heatsink is attached using 3 push pins through the existing holes in the card.  I had to widen some of the fins on the heatsink to allow the pins to be inserted.  I also put some electrical PVC insulation tape on the underside of the heatsink to insulate it from other components on the card. 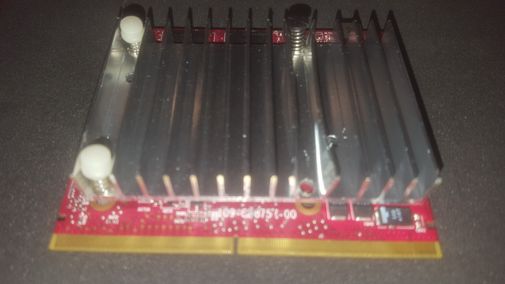 I have been running the card consistently now over several hours and there are no heat/cooling issues.

System is running perfectly.with the back cover in position. 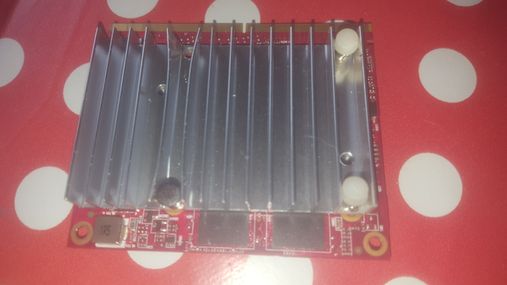