Before doing that, I navigated through the menus of WinRE, just because I was curious.

I found that inside the "Use a device" option there were two strange entries: "Manjaro" and "Ubuntu" (you can see what I'm talking about in the pic below). These two entries lead nowhere, and when selected a message from UEFI appears, saying "The selected boot device failed. Press <Enter> to continue".

I remember that I installed (and then removed) the two Linux distros at least one year ago. They were installed in a "triple boot setup" alongside Windows 10, that was the main OS on my SSD, while Manjaro and Ubuntu were installed on the internal HDD.

Anyways, yesterday I didn't worry about these two entries because I was going to wipe all my data, but after the restore was complete, they were still there. So I started looking for a way to get rid of those two (harmless) entries.

I formatted both my drives with gparted, restored UEFI to default settings, re-flashed it... but nothing worked. So I tried by low level formatting both my SSD and HDD, but that didn't help either. They are still there. (Every formatting was followed by a fresh Windows installation from scratch).

Where in the world are those entries stored? I don't know what else I could wipe to get rid of them 😧

I don't know why SSD is shown in this menu, but HDD isn't. Maybe it's related to the fact that Ubuntu and Manjaro were installed on it and "took its place".

(A link to the pic, in case it's not visible: https://drive.google.com/file/d/12FdEqrpGXlxHIu788-6ldhQoux6jCGLx/view?usp=sharing ). 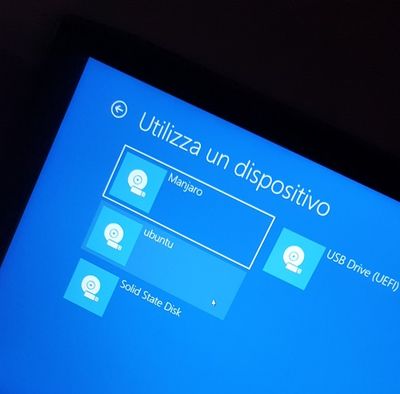