When checked in CPU-Z the Multiplier value of CPU clock is stuck at x 1.0 constantly (instead it should be fluctuating and should be higher) as compared to other laptop's cpu-z states.

Also the temperatures are all showing normal in HWiNFO. One thing I noticed was the windows system properties and task manager showed 4 GB installed and available but in HWiNFO it shows only 2 GB physical memory available and usage doesn't go beyond it either. screen shot of the sensor report attached when i had disabled intelppm. 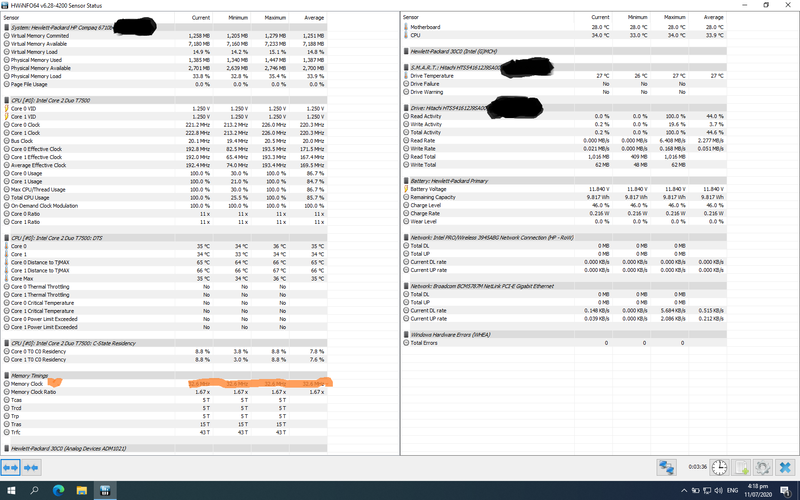 It is running Windows 10 Pro 64 bit with latest updates installed and has 2x 2GB DDR2 PC2-5300 RAMs but has gone very very slow in responding due to that.

I have tried following:

But still the same...If anyone can help me out please....?

Could it be due to BIOS being quite old v F.06 and not enough for latest windows 10 version if so can someone please advise of steps & source files locations to upgrade it asap...?

But I mostly feel it to be some hardware fault of motherboard clocking system as I changed the cpu from 2.2 GHz to 1.8 Ghz but same to changed it back to original but same....?

Finally after much research I tried the Throttlestop utility in which I had to activate the clock & cpu modulation to 100% manually and put that process in the startup but it takes around 15 to 20 mins for it to load windows 10 pro 64 bit to its login screen but after that it runs the laptop as expected!

Does any one know of any permanent solution for fixing the motherboard clocking system or some register settings for cpu?