HPSA on my laptop tells me that it has zero updates waiting but my desktop has three updates.

HPSA on my desktop tells me that it has zero updates waiting but my laptop has eight updates.

I have deleted all devices from my profile, reinstalled the latest version of HPSA on both laptop and desktop then added the devices again.   The problem remains.   While this seems trivial it means that both computers show a false warning flag which I don't want to ignore in case there is a new real warning.

The HPSA should be OK on the local system - just (for now, at least) don't depend on it to keep track of your "other" device update status.

I understand that you are getting false updates from the PH support assistance.

Please let us know what happens if you click on updates. Please provide the screenshot of the updates.

Please refer to the below link and perform the same.

The first two screenshots are from the laptop, the second two from the desktop.  Note that in each case the 'remote' system is reporting the last check being in March rather than August. 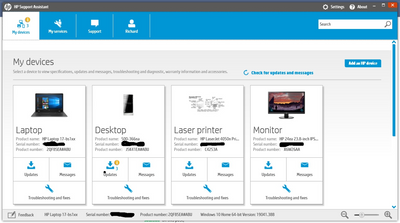 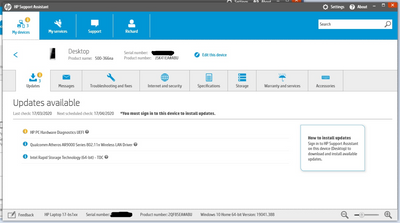 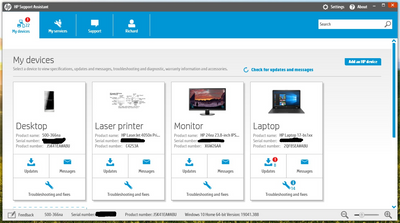 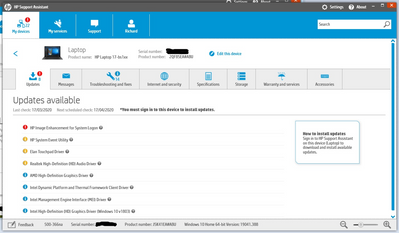 Please perform the below steps and check.

2) Enter DISM.exe /Online /Cleanup-image /Restorehealth (note the spaces before each "/").

Try creating a new user account on your computer.

I don't think you understand.  The whole point of my query is that although both machines are fully up-to-date according to HPSA when I check for updates, the other machine does not believe that to be the case.

I would suggest you contact our phone support and check for the support option. So, that they will take the remote control and check.

Here is how you can get in touch with phone support.

We are experiencing longer than expected wait times to reach an agent due to the CoViD-19 impact and there might have been issues in you getting the expected resolution on the issue.

Apologies for jumping in unannounced.

The following has not been checked on the HP Support Assistant application (currently at version 9.6.x) - in other words, on the one system on which I have HPSA application 9.6.x installed, I have not bothered to add "other" devices.

HP Support Assistant is primarily useful on the local machine.  On that system where HPSA is installed, HPSA is generally able and willing to track and install updates.

The monitor option does not (apparently) keep up with the "other" machine's current status.

Reminder:  This is observation of the way it works and not necessarily the way it should work.

You can temporarily "fix" the situation by removing the remote "other" system, Restarting your computer, and then re-adding the "other" device(s).  Fix is in quotes:  Assuming it works, the effect is temporary.  Next time the "other" device is updated, the local machine will likely lose track of the status of the remove device.

Finally, pounding on it doesn't seem to have an influence on what it does.

Paying to have HP Support discuss the subject with you might be worthwhile if you wish to make an official report of your findings.

Thanks for jumping in.

The version of HPSA that I'm running is the latest that HP offers me.  Apparently support assistant version 9.x is for select PC's that come with W10 S mode.

I have yet to explore the links suggested above, but if as you imply I am expected to pay HP to report bugs in their software, then the bugs will go unreported.

Thanks for your observations.

The condition is known - or at least observed - you are not the first (or only) member to report this behavior.

I am sorry for the inconvenience the situation is causing you.

You are not expected to pay to report this (as mentioned, the behavior has been reported previously).

I wanted to leave the door open should you decide to pursue the subject outside of our Community.

Thank you for participating in our HP Community.