I bought an HP pavillion 2in1 something or other and have had the same problem forever. I literally only made this account so i could come on here and complain and follow this thread hoping it gets resolved. The only reprive I ever found from this was when I disabled some Onedrive update/login that would start on boot and get caught in an infinite loop but would not show up on any usage statistic (crazy how this is even a problem). But after a short time the 100% disk came back.

I've tried every superfetch disable, bloatware removal, drive modification, and so on that the internet has to offer but nothing ever changes. I'd like to just get a new system and chalk this up to a loss but without knowing what the problem was, I do not know how to spec out a new setup.

If I ever find anything that works I'll be sure to post it here.

Well to keep this post alive for a solution I decided to share some more work and issues up to this point. HP likes to not reply to my DMs or Tweets so this post seems like a nice way to let others know what is going on.

In May the battery to the laptop no longer held a charge it would go from AC (according to HP diags)100% to 71% in a matter of a few moments, I'm sure the wear of the drive usage was not helping. This was with power settings adjusted and best performance selected. Six months of a battery life.

I have been posting on Reddit reporting multiple bugs to Microsoft, since I had trouble with installing 1803 I will post the steps here as well. When trying to upgrade my version of Windows (event viewer 0xc1900101) the fix for me might not be the one you want. I had to download the Windows 10 the media creation tool and create a new clean installation of Windows 10 1803.

I tried the update from the Windows update and tried to just update the operating system using the media creation tool, the last method and the one that worked was to create a bootable USB ISO.

However even with this upgrade it seems more things had broken worse than before and didn’t help with the drive usage.

I had downloaded software called Driver Easy  to help with the search for newer drivers as the HP site had an issue with the model of my laptop, it could not be found at the time (glad they finally fixed at least that.) Driver Easy is free but has limitations as such, for example my DL speeds were throttled heavily and it requires manual installation of the drivers. I had updated all the ones that Driver Easy had found apart from the watchdog driver update, this seems to be hidden in my device manager or had been labeled incorrectly.

This helped my issue… now when I idle the disk stays at a constant 50% and shoots up. There were newer drivers I could find on the HP site such as the touchpad, card reader, audio, and LAN it seems they were updated for the (1803) windows update. I even installed the newest BIOS from June 2018. Sadly, after all this effort the disk usage is still an issue.

I have decided that when I use the HP laptop (I try not to unless I get another throw a dart at a book solution) to just load/save as much as I can from an external drive. The 1803 update has added a lot more active services that I am trying to track down and see what I can shut off that may help.

I had tried changing the boot options to Legacy and even had the disk encrypted at one point, but the issue with the disk made it to where the laptop would take what felt like 10minutes to even enter the desktop from the login screen.

I would like to know exactly what percentage of the laptops that are even sent to QA, all the reviews I have read from other retailers that sell these products and on this site, have a similar issue. Many say exactly as I did it was from when it was opened.

Last update the other laptop that I had also new, and not used as much, randomly decided to get a CMOS reset 502 error simple right? I have replaced the CMOS battery and tried the basic recovery steps betting on the motherboard needs replaced. Less than a year old and KIA by DOA. Did I happen to buy the only two different HP laptops from two different stores that had the same issues that can’t be solved? I would like to know what is going on and why so many people are seeing a similar issue with these products and no real answer. At what point are these issues investigated?

Still has a very high disk usage when not running any programs.

When I do run programs it's like looking at online images on15kbs... doing a whole lot of waiting.

In theory there is no difference between theory and practice. In practice there is.
0 Kudos

I've just got a brand new HP Pavilion X360 and is experiencing the same issue. 100% disk usage all the time. I did a reset already and doesn't help. And I think the computer is slow because of that.

I ran a disk scan and no error was found.

HP Recommended
I accidentally screwed the os and unable to run any factory reset. I restored the computer with Win8 (I happen to have a win8 media) and the hard disk was running normal. I am now upgrading it back to Win10 and see what will happen.
1 Kudo

No 3rd party apps installed yet. Not even hp apps. Working fine so far.

I'm creating a restore point every step I take.

So I'm not alone. [post edited] the issue here is HP is still  rersponsible as I did pay for my laptop with them. Saying Microsoft takes the blame is like having an air bag recall and the manufacturer says the heck with it you can talk with the air bag company and get it fixed. BS..... HP needs to fix this issue or make it right. I'm forced to use my old computer now because of the slow POS I have now from HP. I was a firm believer in HP before this but now realize the automated support crap being regurgitated over an over rigt out of a script. How about some real support not the guy reading from the support manual made for the hourly tech support.  I could put one together made from this thread alone.

I'm now giving up finding a solution to this issue. I finally got around to removing Windows completely and going with GNU/Linux CentOS7. At first everything looked as if it were fine and I thought I could finally say "it was Windows." Yet that is not the case. As I type this I can feel the keyboard heating up as it continues to have some kind of usage issue. 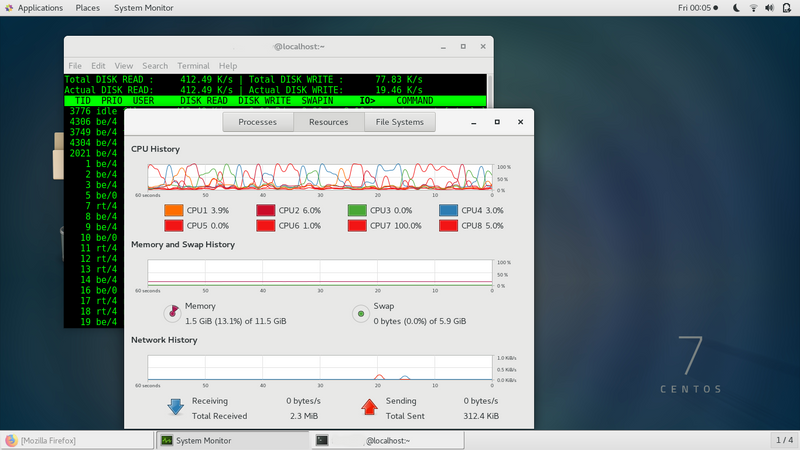 As you notice in the image provided I have only Firefox, a Terminal, and a system monitor running. The terminal is running iotop as su. The writes continue to rise and the CPU continues to go up in usage. For Windows I tried all the known "fixes" that didn't fix it. Not even Linux an operating system that can turn even the oldest computers like new again can save this pile.

I now ask the HP support team for fixes with running GNU/Linux. I'll do that too until something is done here. I'm still under warranty, better think of something. More and more people are coming out of the wood work having the same issue. With over 10k views, the top Google hit for "100% disk usage HP" and no fixes. Not great odds, for a company I use to trust.

Yes I have turned it off and back on again.

Yes the BIOS has been updated.

In theory there is no difference between theory and practice. In practice there is.
0 Kudos
Tags (1)
View All (1)

I have got the same issue with my hp 15 ak007tx and no matter what fix i apply it never works. Really disappointed with hp

Will upgrading the hdd to ssd solve the issue? I dont want to waste any more money so i need to be sure of this purchase.

Not sure... I would think it would help or even running the OS on a different drive than storage. I've since removed all win 10 bloatware and made much progress with the issue but do think hp does have an issue still.