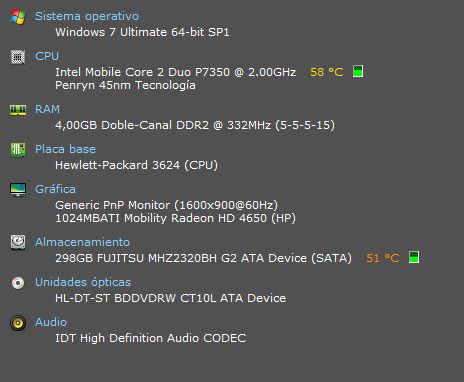 Hello there, new user to the forum.

I have an old DV7-2173cl  notebook which i wanted to revive from the death. Being an old notebook with a lifetime of approximately 7 years it has stocked a list problems:

-The battery is dead at this point too, so i have to use directly plugged with the AC/DC Power supply.

-The original HDD began to have problems and gave me the "3F0" boot error code. I've already changed the HDD and no more boot problems so far.

-It had overheating issues due to dust in the heatsink outlets. I've already taken out all the dust and applied new thermal paste to the ATI mobility Radeon HD 4650 GPU and the  Core 2 Duo P7350 CPU.

Now... here's the real problem, after all the cleaing the laptop started to behave like it's old self...but, according to speccy i have the following temperatures:

I understand the CPU temp (it never was a cool laptop, honestly), but the HDD seems to be really hot for just standing around or doing simple tasks like dowloading updates or using Chrome.

Are these normal temperatures on HDD in this laptop? Can it be related to to HDD being in contact directly with the wireless chip? Some BIOS related issue? Or simply something with the motherboard?

Those temperatures are within the normal range. Could be 10 degrees hotter before real concern.