Please bear with me, after 4 years of working fine and then suddenly due to failed win10 update 😞 my notebook started to suddenly power off (not shutdown but hard power off like battery/cord was removed) . Investigating the issue led me to following:

1. Note book worked fine for 30 mins to the sec and then powered off [same thing happens in Bios & UEFI modes].

2. Noticed the corrupt ME issue as MEI device was not there in the device manager.

3. Tried to install the drivers for MEI, dishes out a message that hardware is not supported on running the setup.

5. Ran the FTK mestate, msg - "Status: Disabled and waiting to timeout (guessing this is the 30 mins prompting power off), IC not programmed,  etc etc..".

6. Unable to reflash Me region, as there seems to be a lock on it. msg - "CPU does not have access to flash area".

Please provide some insight/assistance on how to deal with this situation/issue.

Riddle_Decipher is at your service.

As I Understand you want to rewrite bios ME/flash the BIOS,

No worries, as I'll be glad to help you, that said, I'll need a few more details to dissect your concern & provide an accurate solution:

Did you know that HP doesn't support or recommend flashing the BIOS using any other method apart from the one approved by HP? That's why it's blocked and also why a flash can only be done at the HP repair center.

You could, however, attempt a BIOS recovery, have you done that?

While you respond to that, here's a few things you can do:

A bios recovery to the previous known and functioning build: Click here for details.

Although, if the computer turns off the way you've mentioned it does, and it happens while you are on BIOS/UEFI it would confirm a hardware malfunction within either the motherboard or the power supply unit and hence I would recommend you Contact HP for further assistance on setting up a repair service.

HP Technical Support can be reached by clicking on the following link: http://h22207.www2.hp.com/us-en/?openCLC=true

(1) Once the support page opens please select the country in which you're located. Next, enter your HP model number on the right.

(2) Next, choose the 'Contact Support' tab at the top and scroll down to the bottom of the 'HP Support- Contact' page to fill out the form provided with your contact information.

(3) Once completed click the 'Show Options' icon on the bottom right.

(4) Lastly, scroll down to the bottom of the page and select 'Get the phone number.' A case number and phone number will now populate for you.

They will be happy to assist you immediately.

If the unit is under warranty repair services under the manufacturer's warranty will be free of charge.

Thank you very much @Riddle_Decipher .

I have tried all of this. Here is the entire story how it all began, so that we can be sure it is not a hardware issue. It all began with the failed Windows 10 updates, after failing to install again and again my system was rebooted continuously and took more than 15 - 20 mins to reboot every single time, saying windows could not complete updates and was restoring to the previous state. In order to deal with this issue I went to Microsoft site and downloaded the entire build update, and not to my surprise it also failed, causing the disk corruption 😞 . Now all that was left to do was forget about updating and start cleaning the disk, so ran the chkdsk and dism utilities, everything went fine. This is when the issue began appearing, the 30 min window of death.

After a lot of searching around, found no credible solution, then in one of the lenovo forums the same issue was mentioned and the person had tracked it down to MEI device driver, according to him, his systems MEI device was not there in the device manager, so I went to my device manager and behold the device was not there, on to the hp site downloaded the drivers for MEI and upon installing throws a message that hardware is not supported :(, no matter what I tried, every time the same result. After searching a bit more in one of the forums somebody had suggested to use the FTK tool to get the device state info, downloaded the tool and ran the 'meinfo' utility, returns the message "there was a communication error between device and intel(R) me", ran the 'mestate' utility and it showed that "me is corrupt and was waiting to time out". Here is the interesting part, now there is tool called "fptw" it allows us to reset the Me settings by calling "fptw -greset" and voila system rebooted and the 30 min window of death was no more, 'meinfo' ran fine, 'mestate' ran fine, & MEI device began to show in the device manager, I was able to install the drivers for it, it felt like the spring breeze after a very harsh winter. 😄

Now then where was I, oh! yes so everything was working just fine and after working like for hours and playing few games along the way, it was time to shut down the system, so I did and here we go again, it takes years to turn off and then it finally does, & when I open it next time the same issue again, the device is gone and both 'meinfo' & 'mestate' failing, repeated the above steps again and it worked just fine again and after rebooting, the same sorry cycle. 😞 It felt like being stuck in a loop, so what was left to do was to flash the bios, that is I thought would auto update the ME region and save it permanently and get me out of this loop, anyways back to hp site got the most updated version available there, I was on "ver F.66" and there was a "ver F.71 Rev A". After flashing the bios successfully, sadly it did not fix the issue but disabled the ME region as well, now the -greset command does not work and I am back to where I was, I am not able to go back to previous version of bios as well. I digged in some more & opened this latest bios bin file in Intel's FITC tool, I can see that it has intel AMT permanently enabled and ME something (can't seem to remember right now) permanently disabled, & I am guessing this is what disabled the ME region.

I only have two questions, how can the ME region get corrupted in the first place and/or how can I go back to previous version of bios.

Looking forward to your reply, thank you again for your suggestions.

Please find the images below, that might provide some more insight into the issue. 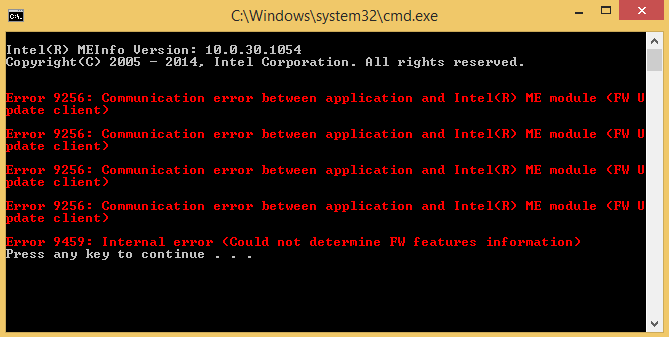 Thank you for responding,

It's great to have you back 😉

I appreciate the detailed description of your concern and it has indeed helped me understand your concern,

However, keeping in mind the circumstances, I recommend you Contact HP as there seems to be a hardware malfunction within the motherboard and it would be best serviced at the HP repair center so that they may replace the necessary parts to fix the issue once and for all.

And Feel free to post your query for any other assistance as well,

It's been a pleasure interacting with you and I hope you have a good day ahead.

🙂 Thank you @Riddle_Decipher .  It was nice to have a nice little chat with you. 😉 Take care.

The pleasure was all mine 😉

If you've decided to get the device repaired via HP, it should be up and running soon,

I would suggest you keep me in the loop, so I could be of assistance to set up your product when you have the computer back from the service center/repaired (if need be)

And feel free to post your query for any other assistance as well,

It's been a pleasure interacting with you too and I hope you have a good day ahead.