Windows Update works but it's "files are missing-corrupt"

Results for trouble-shooter repeatedly finds Windows Update issue, tries fixing it, but says not fixed and that last pop-up has a link for 'more details' which then extremely oddly the link morphs the pop-up that lists the trouble-shooter details that imply all problems were all fixed.  Bizarre. no? 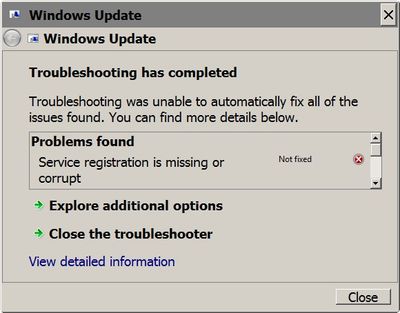 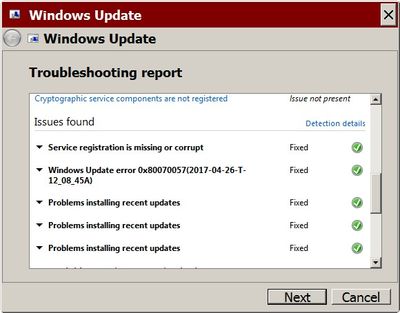 I understand that Windows updates are not being installed on your computer.

Kudos to you for running the Windows update troubleshooter.

Are you using a genuine copy of Windows?

Request you to boot the computer to BIOS and check if the serial number and product number of your computer are mentioned.

Please check if the copy of Windows is activation on your computer.

Run HP Support Assistant to make sure all the drivers are updated. Click here.

Thank you so much for your replying.  Honestly forum help is highly appreciated.

I know this post's too quite a read, but I think well worth it...

As for the issue, honestly I'd had enough of W's and tried/succeeded at performing a clean install, deleting the primary partition and somehow it saved the old files somewhere as 'old' (used them once when setting up the desktop icons from the old system).

As for WU, it is in my opinion, MS's latest efforts at literally forcing users into giving up and buying into their W's 10, again forcing users to pay for their still bunki-prone WMC.

App's for the micro-rant, pun intended.

In as much as I can no longer rely on WU or MS any further, their proving to myself and I'm sure most others as well, their interests are nothing but getting more money for the never ending onslaught of patches, band-aids and new platforms (which they only test by using us as guinea pigs for beta versions and the like).

So now with but some 17 important updates installed, amazingly even forced WU to DL and install W7's SP-1, even more amazingly, IE 11.  So I'm done with WU, it can rot in u-now where.

For anyone who needs it, most I'm betting, the trick to bypassing WU's bunki-ness, at least for me, was to when the DL's loading bar seems to stall for any unusual length of time, I click the cancel button and immediately click the re-try button.

That ‘trick’ not only resumes the DL at the same percentage it was, but immediately bumps it up to a higher percentage and moreover, the DL bar's percentages quit stalling less and less.

But common sense also told me that once the loading bar percentage displays 98%, I leave it alone and trust it’ll actually complete and change to the installing mode.

I think I may have even also used that trick in the subsequent DL's WU's installing mode, as I think there again, WU/MS had other ideas in mind as it began stalling (having had enough of letting it do it's thing which usually results in 'failed').

My only aim now is to somehow reliably (hopefully without paying for such a program) create a 'slipstream backup' onto an external HD, if that's the right term, so if/when things go south anytime later on, all I need do is spend the 20-30 mins replacing the entire contents of the disk drive (with a once again, working system).

Again with respect to the advice to check BIOS, it may.may not be bunky, as it denotes I have Vista installed (something HP's recommended BIOS updates 'created', or just as likely I somehow caused it myself) and I haven't yet figured out what to do there.

Best regards and happ- e-trails to all,

Omitted adding that yes the system's platform is based on OEM System Builder Pack (Windows 7 Professional).

As always, happ-e-trails to all,

I have escalated your concern to HP’s Support Team in your region to have it reviewed for available options, if any.

You should be contacted within 4 business days (Excluding holidays & Weekends).

Please send a Private Message, if you aren’t contacted within 4-5 business days.