Historically there has been a "Scan to Computer" option available from the LCD display at the printer.

However the other day when I clicked the option, it was failing to locate any computers on the local network.

That prompted me to perform a software and driver reinstallation on the source computer.

Immediately following that process the "Scan to Computer" option completely disappeared from the LCD display.

I have read a few other threads which claim this feature needs to be turned on via the printer settings.

To that end, there is absolutely no option to turn this feature on located anywhere. 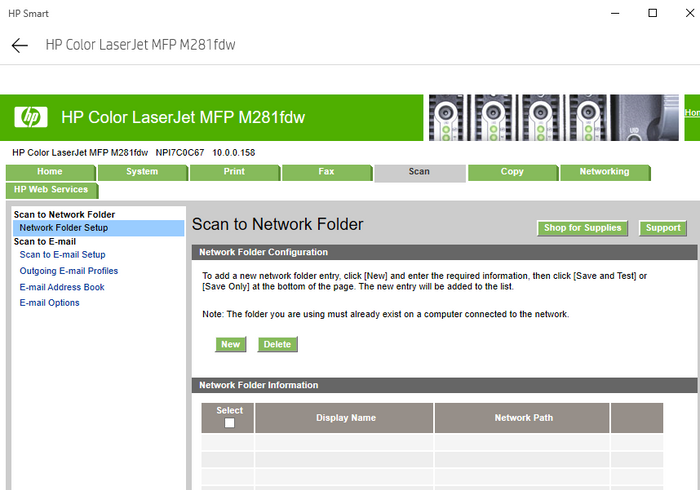 Additionally one can access via a Web Browser by typing in the IP address, however the UI is identical to Figure 2.

Does anyone know what is going on here, it seems HP perhaps has deliberately removed this feature seemingly overnight?

Granted, the other features do work albeit very cumbersome to set up.

****NOTE: I am aware of a newer version of the Frimware, however we updated back in October when it was released and the printer would not work.

It would go into a power loop wherein it would restart itself every 30 seconds.

I traced the issue approximately down to an issue with the software controlling the WiFi adapter.

When the WiFi adapter was disabled at the printer, it would stay on and one could print via USB cable.

However as soon as the WiFi was turned back on at the printer it would power cycle again.

This happened regarless of the WiFi network nor frequency band.

As such I downgraded the Firmware to the June 2020 version and it has been Wifi printing and stable since.

Any support would be greatly appreciated.

Reply
I have the same question
Tags (2)
View All (2)
Category: