Like 1000's, I had problems w/ getting Pro 8600 printer to scan (similar for many models).  It prints fine but won't scan.  Print & Scan Doctor diagnostic tool (d/l from HP) gave no USEFUL info on what was wrong.

* 1. Print & Scan Dr. showed "Driver Check" failed. Often, the "failure" isn't from corrupted or missing scan drivers - though can be.

SOMETIMES (probably not for most), # 3 (or just failure to scan) is from WIA service & dependent services being turned off in Windows Services.  Lots of posts here, w/ details on checking WIA status  in Services - worth a shot, but isn't the problem for a good many users (like me).

Another basic thing to check is if scanning drivers are installed.  In Vista & other versions (just do search for your OS) - some of main HP scan drivers are located in C:\Windows\twain_32.  I have a sub folder there - "HP Officejet Pro 8600," w/ 3 drivers (in Vista x64).

The names may be different for your printer & / or OS, but if NO HP drivers, probably failed installation.  1st time I installed, none were there.

If set up wirelessly, it could be a router signal issue - often isn't.  If printer control panel shows "full strength" on the network (name / SSID) it's connected to, it isn't a signal strength issue.

** When my router changed / reassigned the printer IP address, it completely screwed up scanning & caused many of above cryptic messages.  It produces errors that sound like scanning drivers or something's REALLY gone bad.  * check printer control - "network summary" for current IP

** A router reassigning new IP can occur after power outage, if router is powered off, if IP address "lease" has expired; because printer was off for a while - usually for over 24 hrs.

** One solution (for this & other printers) is to assign a "static" IP address from router to printer, through printer's EWS assign static IP.  The article's for wireless - same applies to wired.  After setting static IP, may have to power off / on both router & printer.  Once printer working / scanning works, IP address WON'T CHANGE & cause problems.  It's common practice among geeks / REAL network techs.

** If router reassigns an IP to printer or you set a static IP, you may have to re run the HP Printer Setup & Software wizard (I did) - from Programs / HP / printer name/, so the HP scanning software will RECOGNIZE the new IP address & USE IT for scanning.

NOTE:
1.  Updating the IP address in Programs / HP/ printer name / update IP address, was NOT enough for scanning to work again (for me).  Not when router reassigned an IP or I set a static one.  I HAD to re run Printer Setup & software wizard, though the correct address showed in Printer Properties / Ports; & under "Update IP Address."  The printer's just not that smart.

2. ** Once you assign a static IP address to ANY device, it NO longer shows up in router's attached devices list.  You access the HP EWS using the static IP in Printer Control panel - network summary.

Sounds like you are having an issue with the scanner. From the information posted you have had it set up with a wireless connection. To start out figuring what the issue is, can you install the printer using a USB cord to see if you can recreate the issue that way?

Let me know and I will get right back in touch with you!

PS I hope you had a great weekend and have had a wonderful day!

You skimmed the post too fast.  I'm giving tips to others.  How to get around HP idiotic behavior.

HAD (scanning issues) is the operative word.

Thank you for that information, I apologize that I misrecognized the nature of this post. I appreciate your effort to help other HP customers and I hope that you are still having a lovely day.

I'm hoping you can help me.

My client purchased an HP 8600 Pro and I like it so much that I purchased one myself.

same printer I added a printer using my router at home to print wireless and just changed the name.

on, chec k the connection, and ensure your network is functioning properly.  If these conditions are correct, restart

the product and try scanning again. (which doesn't work for me)

Also says "If you installed this printer by IP address, then you might need to update the IP address" I tried this too

but it didn't work either.  I don't think it knows which printer I'm connected to even though I added two printers (home) and (client)

My suggestion here would be to attempt some of the steps as suggested by the OP, starting with running the Print & Scan Doctor.    I would then create a new post on this forum separate from this thread, as you will get dedicated visibility to it.   Document your problem, steps taken to troubleshoot and results, etc.

I am an HP employee, however, this content reflects my personal opinion and is in no way associated with HP.
0 Kudos
Highlighted

I have been facing this exact same issue with my Deskjet 3545 ever since I purchased it last week. Very annoying and it screws the usability of the device while scanning.

Out of 10 pages scan for example, 2 or even 3 scanning attempts will not actually trigger a scan. Sometimes when the scanning application is launched, you will see an error maeesage saying "Scanner communication cannot be established... "

What I did so far to solve the issue:

None of these have worked so far,  and I am still facing this issue.

When this problem occurs, if you press the Wifi button in the printer, you can see that there is no IP address and the Wifi status would be either "Not connected" or "Connecting..". Within few seconds, it will connect again to the network. In the PC, you will see an error message like below. 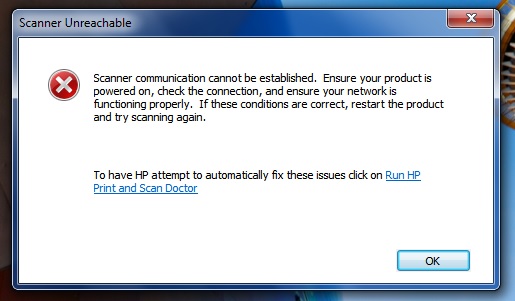 Dear HP, how can you be not aware of this glaring issue?  Please tell me what can I do in order to solve this.

Have you checked your wireless router to make sure it has the latest FW?  I presume it has been rebooted recently with the changes you've been making to it.

When you changed wireless networks, did you use a completely different router?

If you continue to get intermittent WIFI connectivity across different routers, then it begins to sound like a device issue.   Since you've recently purchased it, I presume you could return/exchange it for a different unit and see if that resolves the issue.

I am an HP employee, however, this content reflects my personal opinion and is in no way associated with HP.
1 Kudo
Highlighted

I received this message every time I tried to open the scan shortcut after a very brief power outage in my building (20 seconds), while a document was mid-scan.  Printing and faxing both worked perfectly, just no scanning.  Print and Scan doctor indicated that the printer was not connected to the network, but the IP address showed that everything should have been fine.  Guessing maybe there was a temp file or something of the sort that was created when power went out and interfereing with communications?

Uninstalled and reinstalled Printer Setup and Software Wizard, and I'm now back in business!