We have a new HP Z240 workstation which we have installed the RGS Sender software on using default settings.

We have then intsalled RGS receiver on two other PC's on the same network. This was also installed using default settings.

When running RGS receiver the Hosts name is input and the software connects. This brings up the Windows 7 Login screen for the host within the receiver RGS Window . The password is entered for the Host and it starts to connect. A black window briely appears then the receiver goes back to the RGS home box - this box still shows the Host PC name and the connect button.

This just keeps happening and we go around in cirles. We just cant get beyond this point and cannot bring up the Host desktop.

We have uninstalled and reinstalled the software on the host PC and the recievers.

We can log in to the host easily through Windows remote desktop though, without any issues.

We need to use RGS to allow the use of 3DConexxion USB devices.

Does anyone have any idea what is going on?

Thanks for the reply

We are using workstations, all with Windows 7 64bit.

Graphics cards are either NVidia Quadro K600 or K620 with the latest drivers. (each has dual screens)

I’m not sure of the version of the RGS Sender software but it was downloaded and installed last week. I’m assuming it’s the latest but if you can tell me how to check the version, I will do.

The sender workstation is a HP Z240 with AMD Firepro W3400 graphics card and i7 processor.

Logging into the sender workstation from any of the receiver PC’s causes the same issue.

The RGS software on the receivers recognises the sender and brings up its Windows 7 login screen.

The Sender Login details and password are entered and a black screen briefly appears. This then disappears and reverts back to the receiver software Home screen.

I hope you can help

Thank you for the response.  I will see what I can do to get you up and functional.  In order to see the sender version, at the bottom in the system tray or task bar, you will send the RGS icon.  Right click on that and choose about.  That will provide you with the sender version.  However, if you downloaded it about a week ago, that is most likely 7.3.2.  Also, do you have HP Velocity or AVC checked in your Receiver GUI settings?

Something to try, go into the senderConfigapp located Program Files(x86)\Hewlett-Packard\Remote Graphics Sender.  Launch the app, and chain your authentication to Single Sign On.  Save, and then reboot your system.  Then try making a connection with your receiver.  Let me know what happens.

There is no RGS Icon showing on the system tray or task bar.

I can see RGSender.exe  is running in the Resource Monitor though.

We do have  HP Velocity & AVC checked in the receiver settings

I am guessing that if you loaded your sender only a couple weeks ago, the version is 7.3.2.11099.  However, if you want to be certain, you can go into the folder where you have the sender installed, right click on rgsender.exe and go to Properties. Click the Details tab, and you will see the version there.  To get you connected, I wanted to see if changing your sender to Single Sign On helps.  Also, when you connect with your receiver you must use the same credentials that you use to log into Windows.  Here are the different types of authentication.  I would like to get your connection going and then still see if you have the black screen. 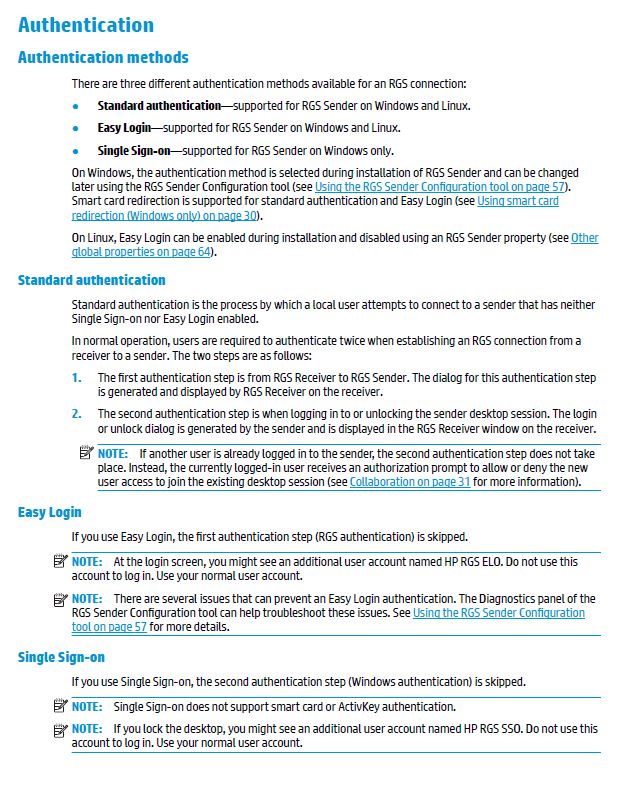 I have changed the sender to single sign on and I have now connected to the Sender workstation. However, I only have a small window of its desktop and cannot see how to make it full screen.

Also, once i logged out I couldnt connect again without rebooting the Sender.

Go into your Receiver GUI and under General, check Match Receiver display resolution and Match Receiver display layout.  You may need need the display resolution but you can always uncheck it.  Is the sender crashing right after you disconnect?  Are you just using the x in the upper right hand corner to close the sender?  I am very curious about the sender crash.  Please let me know if you are receiving my private emails.  I would like to get some logs and would prefer they be sent to me instead of being posted on the forum.

Everything seems to be working fine now and we have only experienced the one crash initially which hasn’t occurred since. Closing the sender is done via the Disconnect option in the receiver.

The only issue remaining is that we keep getting a small window at 640x480 resolution.

On connection the receiver shows the warning that the sender cannot match the receiver resolution (currently 1920 x 1080).

The Sender Resolution is also set to 1920 x 1080 however no screen is attached to the PC.

We can check the resolution is still 1920 x 1080 through windows remote desktop.

When checking the screen resolution through RGS we see 640 x 480 and the display shows as Mobile PC Display. There is no option to change from 640 x 480