HP Recommended
Product: Ac200w camera
Operating System: iOS
Anyone know the app to download onto an iPhone 7 in order to download the videos from the go ac200w action camera?
0 Kudos
Tags (4)
View All (4)
3 REPLIES 3

The manual page 14 says to download HP Xcam from the AppleStore and explains how to install it. 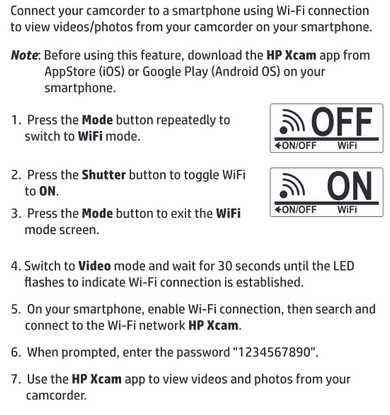 HP Recommended
Cheers,
I’ve now got the app and it’s communicating with my camera ....... but it’s all in Polish.
Any ideas about this?
I’ve tried the support address on the Xcam app page but it’s not available.
Thanks anyway, at least I’m a step forward.
0 Kudos

HP doesnt make it easy to find info. I was able to track down that it was sold in Poland, but according to the list, there is no listing in HP's content data that it was available in the USA (you didn't mention where you're at). That is probably why the app is in Polish.

I tried finding HP Xcam app in my Android phones Google Play Store and couldnt find it. Just 3rd party apps with a similar name. You can still find it online in stores like Amazon, but that don't mean the software will be in English.

Searching further, it appears it might be a re-branded WASPcam. Perhaps you can find an iOS app for that and it will work just the same in English?